Let’s talk about the seminal album of my youth, the 1976 KISS album Destroyer.

Three times on vinyl in the 1970s, once on cassette, once on CD and coming full circle in the year 2012 with this new remastered edition on vinyl.

Destroyer is over 35 years old, but my earliest memories of hearing its tracks for the first time at the flaming youth of 7 will never be forgotten. 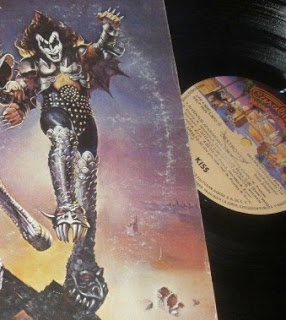 KISS Destroyer had been around for a couple years before I got my hands on it, and I know I was hardly alone in my late blooming fandom.  1978 was the height of mania around the band, cumulating in a penultimate cash-cow audience–kids introduced to the group in the form of action figures, comic books and, oddly enough, a Hanna-Barbera produced made for television movie called KISS Meets the Phantom of the Park.

My introduction to the band though was definitely via this album.  Before owning it myself, I was familier with every note and lyric, having listened to my friend’s copy countless times in his basement.  As the dark riff of Detroit Rock City gave way to a way-too-adult tale of DWI irresponsibility, we turned the dial to 11 and marveled at the fact that finally a song mentioned our home state’s metropolis.
“Gene Simmons drinks alcohol, spits it out and lights it on fire,” my friend revealed.  Knowing only the  rubbing alcohol used to clean scrapes and cuts, I was completely confused and fascinated.  “Isn’t that dangerous?” I’d ask.
God of Thunder would start up with its insane children babbling non-sense (reportedly Producer Bob Ezrin’s kids recorded on walkie-talkies) and thump its way into our imagination.

We would stare at that album cover (designed by legendary illustrator Ken Kelly) and imagine this song was the soundtrack to the burning rubble and smoldering city in flames.  While Ace, Peter and Chris wore sensible glam-rock platform boots, Gene’s demonic flats seemed to be an extension of his terrifying persona.  It was the perfect combination of horror and fascination.

Songs like Flaming Youth, Great Expectations and King of the Night Time World were just pop-glam perfection.  These were the songs that really got you jumping from your parents’ credenza onto a “house” of sofa cushions.  By the end of side one, we were ready for a hard snack break.  Fortunately, my friend and I had riders in our contract that required a plentiful supply of Tang and Nutter Butters.

Side Two of the album gave way to songs with themes and motifs brave enough for any naive 7 year old–the sex craving groupies of Do You Love Me?, the fight for your right to party (years before the Beastie Boys) with Shout it Out Loud and of course the dilemma of balancing your band with your woman in Beth.

In time, I’d land my own copy of Destroyer as a gift–my very first record of a collection that continues to grow at the age of 40.  It was also the first casualty of my record collection, having suffered the hard consequences of vinyl under a hot summer sun.
The second, replacement copy was played so many times that the vinyl actually turned white, with the exception of the track Beth which is easily the most skipped song on the album if you owned it as a 7 year old boy.

I mean, my babysitter liked that song.

Yet, she was in the KISS Army, and had that one up on me.  Some day they would make a movie about her childhood with that kid from T2 and nobody would see it.

I actually think it holds up, capturing that moment in Rock when the music took a back-seat to alter-egos and merchandising. Not a lot has changed in the music industry, and surprisingly KISS still kind of hung in there through the years.

I stand by my belief that this is their best album, having nowhere near the expertise to make such a statement.

DESTROYER RESURRECTED by KISS is available now on Vinyl, CD and Digital Download.