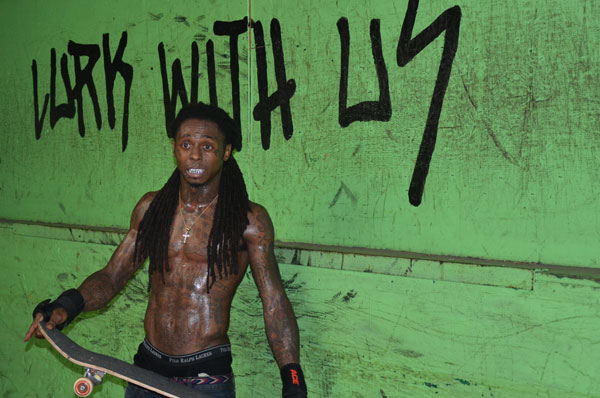 Lil Wayne has decided to take a break from his music career to spend more time living the skateboarding lifestyle.

In an interview with Hot 107.9 (Atlanta) he said about his decision, “…I picked up the skateboard and I thought it’d be a hobby and what happened is it’s a lifestyle,” he said. “You have to be fully committed because its super scary. In order to be fully committed you have to live that lifestyle. Like the young kids say, ‘You have to be about that life.’ It’s kind of putting rap on the back burner. I think I deserve that. I think fans deserve a little-to-no Wayne. I’ve been everywhere. I’ve been out on everybody’s song. I’m still on everybody’s song. My artists have been doing awesome. I believe the fans deserve some peace from me. So I’ll be on my skateboard in the meantime.“

His love of skateboarding has also grown to include a new state-of-the-art skate park called DEWeezy Skatepark in New Orleans’ 9th Ward area which will open on August 29th. The project was a partnership between Wayne and Mountain Dew (who he has worked with on the This is How We Dew campaign) which will hopefully become a center for the community [All Hip Hop] .

In addition to the park Wayne is also working on a line of skater shoes.

For fans of his music, this might seem like a blow, but don’t worry, his new album The Dedication 4 is set to drop on August 15 so that should tied you over for a while.

In this article:Celebrity/Gossip, Music News

When “Record Store Day” started in 2008, it was merely a beacon of awareness for independent record stores.  Keep in mind, this was two...

Colors, the new album from Beck, shouldn’t work.  On first listen it doesn’t, especially if you’re a fan of the artist, or just casually...