There are often new re-imaginings of Batman, his friends, foes, the rest of the world he exists in, and of course his origin.

I’ve done a review for The Comic Drawer that discusses Batman in his hundredth year of heroics as they near an end, so I thought it only made sense to also discuss a book that focuses on his aforementioned origin.

Although this origin is in a world a bit different than the usual ones we see the titular Bruce Wayne and his alter-ego in.

Geoff Johns writes a Bruce Wayne who is impulsive, brash, and otherwise not yet the heroic person we think of when we hear, “Batman.”

When we meet Alfred he’s not simply a butler for the Waynes, he’s an old friend of Bruce’s father, Thomas, from the military.  Alfred has been brought in to oversee security for Thomas Wayne’s mayoral campaign.  And the very night he arrives the Waynes are murdered.

Many of the supporting cast including Lucius Fox, Harvey Bullock, Barbara Gordon have been reimagined often in different ways than we may be used to. 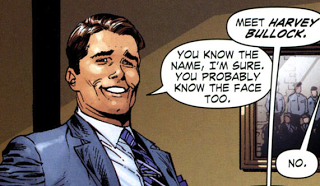 It’s a good bit of fun for fans of Batman to see these characters in different roles, and new readers of Batman may not notice, but will still be able to enjoy the comic on its own terms.

It makes sense for this new Batman of this world to be inexperienced and headstrong, and Alfred being a tough-as-nails ex-soldier works surprisingly well too.

If I had one complaint about how characters have been changed, it is that Jim Gordon is made wholly unlikeable.

In pretty much any other Batman comic or movie he is that one incorruptible cop who fights crime even if it puts him and those he loves at risk.

In Batman: Earth One, Gordon is basically another dirty cop who is so worried about his daughter Barbra’s safety he lets criminals run roughshod over the law. 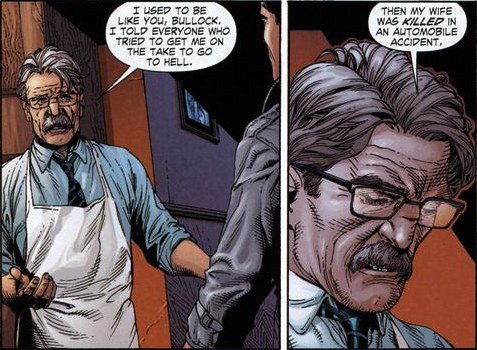 Yes, at the end of the comic Gordon comes around, but seeing this man who looks entirely beat down by life is just so odd when we think of how Gordon normally is in any other interpretation.

The plot consists  mainly of Bruce becoming Batman and trying to figure out why his parents were murdered that night—as signs clearly point to a conspiracy to assassinate his father before the mayoral election could be won.

Between investigating this mystery, growing into his role as Batman, and taking on an wholly new character to the mythos named Birthday Boy, a good chunk of things happen for our Batman—and his friends have plenty to contend with too in a city as nasty as Gotham.

Gary Frank has always provided stellar artwork to the comics his artwork graces.  A common criticism is that his way of drawing faces can look plastic and odd, but even with that occasional flaw his ability to draw actions such as Batman attempting to jump across a roof and failing miserably looks beautiful as Batman crashes about before landing roughly on the ground. 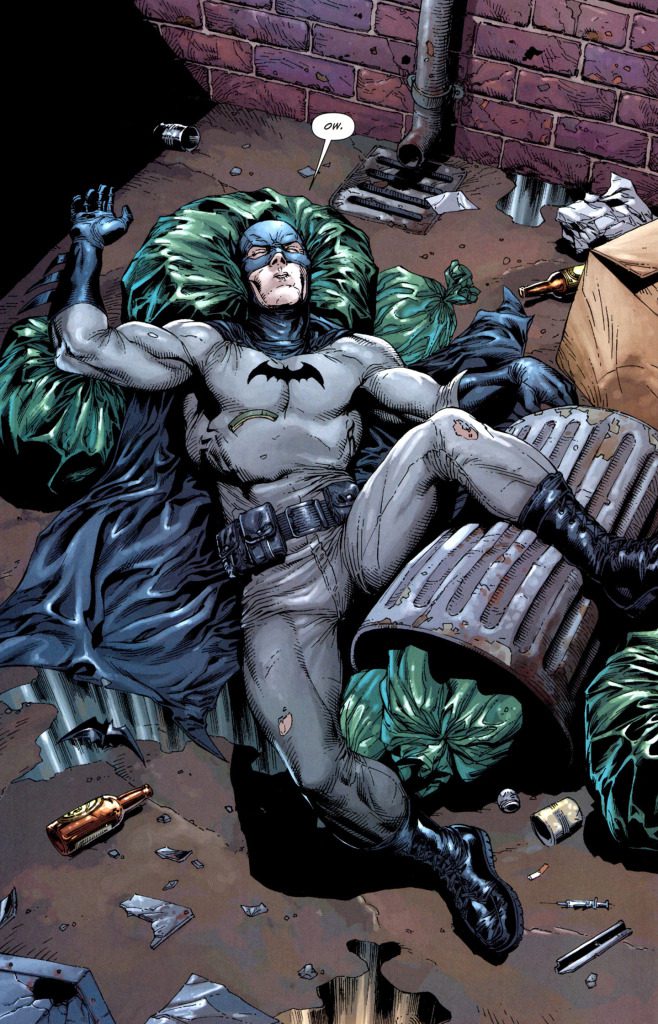 Frank’s artwork has a realistic look to it with just hints of interesting stylization that keeps things intriguing, and his way of drawing Batman is just spectacular. Bruce Wayne’s outfit can at once time look large and imposing, and on another occasion lithe and quick.

Plus the character of Birthday Boy looks a bit absurd with his outfit, but Frank still manages to make it look imposing and a bit terrifying. 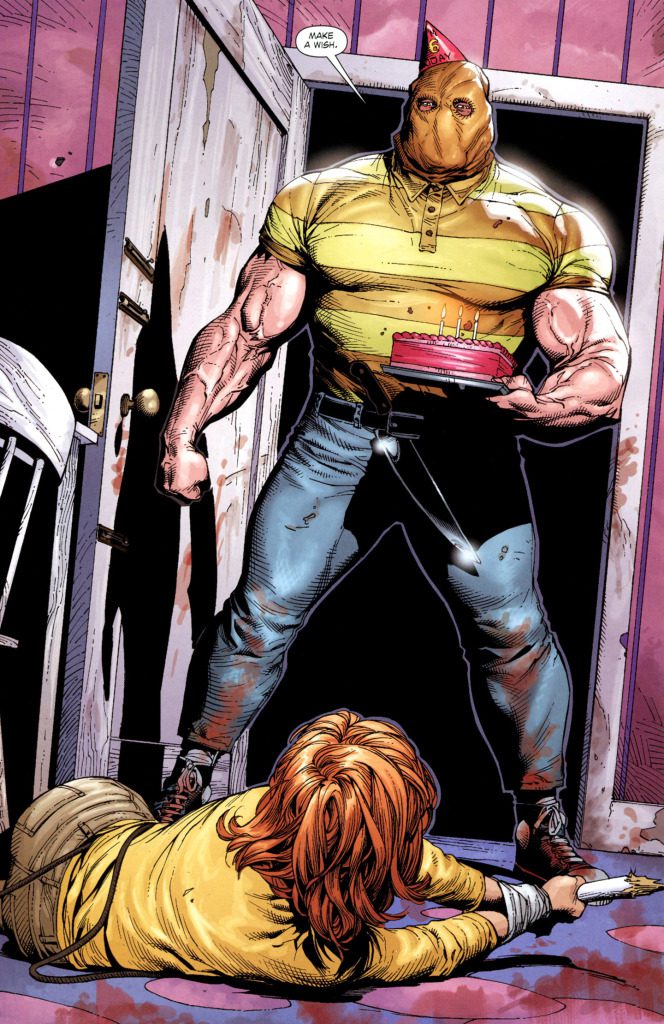 Some choices of how characters are portrayed (such as Jim Gordon) are baffling, and while I thought the way Bruce’s Batman starts out with issues and mess-ups was fun, some may think it just makes Batman look like a loser until the end of the book when he finally seems to be growing into his role as a hero.

Plus, there are some uncomfortable messages about how torturing a criminal can be okay because, hey, he’s just a criminal, who cares about his rights?

Even with the few characterization missteps and some mixed-messages this book impresses with its wonderful art, build-up of a mystery with a nice twist at the end, and the great job done with the character of Alfred. 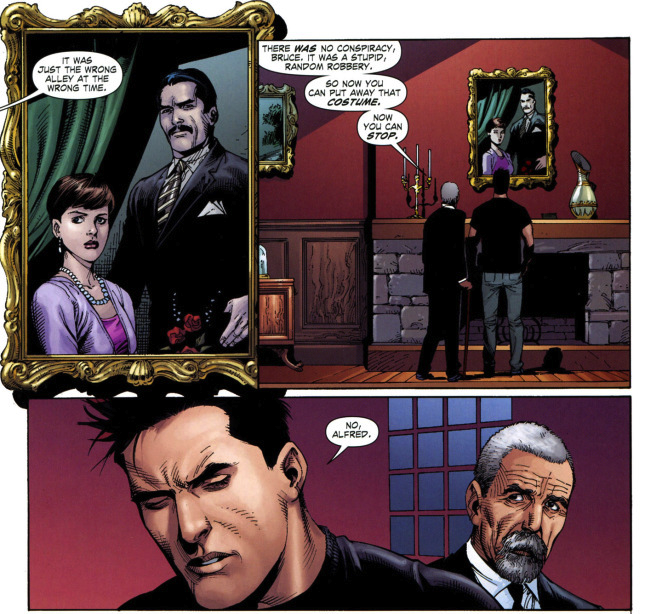 Should you be looking for a Batman story without tons of back-story or continuity you need to know that discusses Batman when he was first starting out…well, you should probably read Frank Miller’s and David Mazzucchelli’s, Batman: Year One.

If you’ve read that however and also want a more recent take on Batman’s origin, then go ahead and read this. It’s an enjoyable book, and I for one can never get enough Batman.