I’d never listened to, My Chemical Romance, until shortly before I wrote this review.

I didn’t know its lead’s name—Gerard Way—either, until I saw an announcement some years ago about how said band-head was writing a comic.

I was understandably suspicious of another celebrity getting into the comic-writing field, as often you either get something terrible, or something decent that was pretty much completely done with the assistance of a ghostwriter.

Then I read the Free Comic Book Day issue of the series (included in the trade paperback I’m reviewing) Dark Horse Comics released. 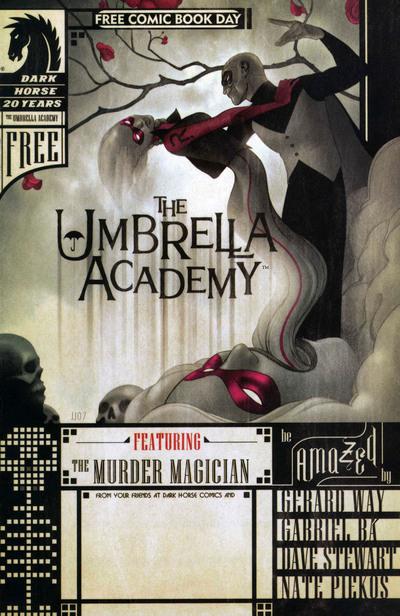 It was, to put it simply, amazingly good.

Note I’m not saying, “amazingly good for something done by a celebrity,” I’m just saying it was amazingly good—and it was all written by Way.

It was as if the weird acid-tripping-type zaniness of Grant Morrison had a baby with the off-the-wall ideas and story-telling methods of Jack Kirby.

We had this group of adopted heroes with a caretaker named Sir Reginald Hargreeves—a rich and somewhat crazy genius, and the heroes were equally interesting. Spaceboy, a man with a huge gorilla body, The Kraken, a tentacle-having hero, The Rumor, who by simply saying something could make whatever she stated occur, the creepy Séance with his dark humor, and the Kraken, who seemed like a mixture of Batman and The Punisher.

I loved this story with great art by Gabriel Ba but wondered how Gerard Way would make all these crazy concepts work over a six-issue mini-series. The resulting mini put to rest any fears I had.

At the start of Apocalypse Suite, the disclaimer at the end of the Free Comic Book Day issue is fulfilled. 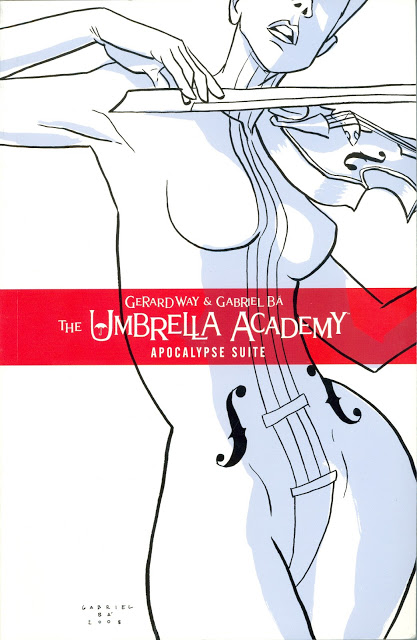 It said that some of the heroes could be dead in the next episode, and sure enough after a supremely bizarre origin story featuring a professional wrestler who fights a squid, spontaneous births, and The Eiffel Tower being controlled by a zombie, we cut to the present….to find Hargreeves has recently died and the Kraken is long dead.

That, plus the team that was The Umbrella Academy broke up long ago. We also meet the member of the group who never had any powers, Vanya. Before the funeral the one missing member of the Umbrella Academy—simply “Number 5”—has come back after running away into the future with his time-traveling ability and the end of the world he witnessed has to be averted within a number of days. Then things get even weirder.

Without giving too much away, a villain plans to destroy to the world by playing a deadly piece of music, Number 5 has to deal with the some strangely-outfitted men in a violent fashion, a newspaper announces, “It’s a Perfect Day,” on the eve of the end of the world, and one of the teams caretakers, a hyper-intelligent chimp named Dr. Pogo experiences firsthand the destruction that is coming. 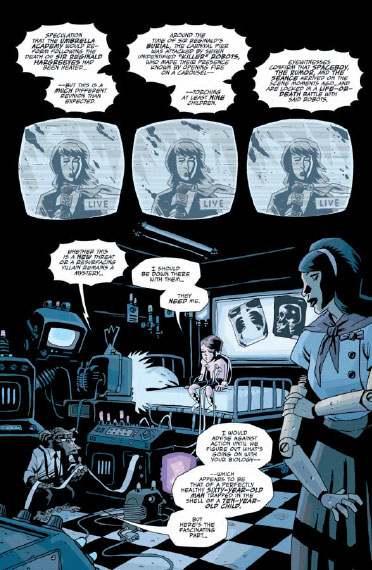 I avoid saying much as a great amount of the enjoyment from the comic comes from having the absurdity just randomly fly out at you.

The best part of the story is undoubtedly the characters.

Even though the wacky events are great, I got the most enjoyment out of seeing this team of super-heroes who are not very super-heroic just trying to eke out an existence in this strange world. Gerard Way hints at much back-story to these individuals without outright revealing too much so that we see he planned these people and their backgrounds out so deliberately it would take years of stories to fully flesh them all out. Then there is the way they are drawn by Gabriel Ba. 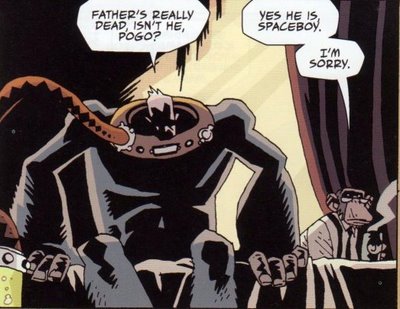 Ba’s art style gives Spaceboy and his gorilla-body an imposing yet humorous appearance. The world he illustrates for us is amazing too. Ba’s drawing is skillful in showing something that seems a bit cartoony and silly, yet also in a way utterly deadpan in its absurdity of chimps talking, heroes teleporting in an elevator, and evil magicians with murder-machines.

To put it simply, he’s a damn good artist.

So far there is just this volume of the story, and a second titled, Dallas, which expands upon the story of Number 5 and just how he traveled back in time—but even with the further storytelling that comes from that volume one need not worry as this is completely self-contained in its own little unique universe.

I eagerly wait for new volumes of the Umbrella Academy to eventually come out but in the meantime I can get much enjoyment from reading this trade and its equally-good sequel series which I recommend you check out too if you enjoy this. 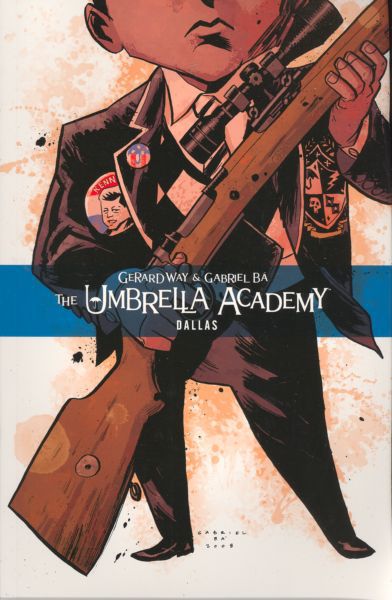 Back when I was leery of a comic by a big-name celebrity musician I had no clue it would be something as awesome and beloved as The Umbrella Academy.

Is it greedy to wish he would do less with his band so that he could make more comics?

What, it is? Well fudge.