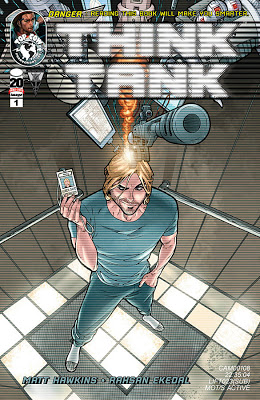 “Science is a wonderful thing if one does not have to earn one’s living at it,” Albert Einstein’s famous words set the stage for a story that makes super science simple and fun.

Matt Hawkins’ script provides a first person chronicle of super genius David Loren who develops new technology for DARPA (Defense Advanced Research Projects Agency). Loren is a very likeable character. While sarcastic by nature, he is not in awe of his own brilliance.

To him, math, science and algorithms are boring and he simply understands them more than most. He is kind of in a rut with several failed projects under his belt and the military breathing down his neck.

After years of employment for the military he tired of his inventions doing more harm than good.

Besides how good the story is, I like how it doesn’t try to be smarter than it needs to be.  More companies are publishing black & white books because they feel it will work for them since it worked for The Walking Dead, but it hasn’t panned out very well.

However, it is completely appropriate for this book as the black and white pages makes the figure work pop and gives the reader that old military movie feel. I haven’t enjoyed reading a comic book this much since Scott Snyder’s Batman #5 back in January. In my not so humble opinion, you need to buy this book, like yesterday. 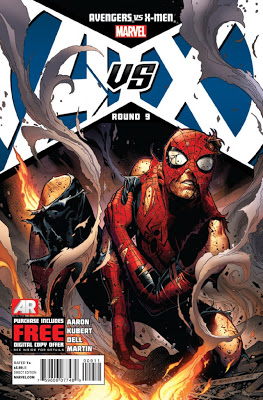 The issue you have been waiting in Marvel’s mega event has arrived!

No one is better to be the story’s conscience than Spider-Man.The Avengers are in hiding and their numbers are dwindling by the minute. The remaining Phoenix powered X-Men are even more powerful with the fallen Namor’s power divided among them.

Colossus and Magik have gone off the reservation to take matters into their own hands to deliver the final curtain on Earth’s mightiest heroes.

The big speech given to Hope sets the stage and the emotion for what’s to come. She feels she’s ready, but that is not in lieu with popular opinion.

Did you happen to see the cover? The answer is, yes. Spidey takes a beating the likes of which we have never seen before. Kubert and Dell depict this encounter in brutal and bloody fashion.

This well-written intense drama will captivate your imagination for the entire 32 pages. I thought the series had reached its bench mark until I grabbed this off the rack. With three chapters left, everyone should be excited to see what happens next. 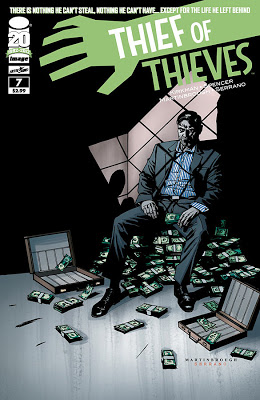 The story of Conrad Paulson’s life is big picture failure.

He lives a secret double life as master thief, Redmond. He makes a lot of money and makes the big score that no other thief can make. Just as a sense of family normalcy is in his grasp, the game pulls him right back in.

In the previous issue, Conrad made a deal with the FBI in exchange for his son’s release from prison. All is well until the Bureau gets a rude awakening which once again, proves Redmond is the smartest guy in the room.

Kirkman and Spencer put together a masterpiece of a script here.

They spare no expense in storytelling as the intricate nature in which all of these events unfold would make any lawyer’s head spin.

The art is solid as always and the coloring gives the comic that attention grabbing look.

This issue is the conclusion of the first story arc in a series which no doubt has many more tricks up its sleeve. 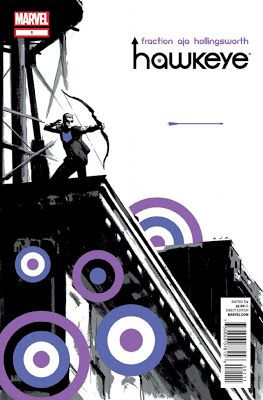 If you are looking for the Hawkeye that wowed fans in the Avengers movie, you’re not going to find him here.

What you will find, however, is Matt Fraction’s realistic and gritty interpretation of a man named Clinton Barton. The purple archer doesn’t have the luxury of fighting crime with super powers and a bow and arrow is not the answer to every situation. While it is a scary sight for anyone on the receiving end, it’s not going to convince a slum lord gangster to stop unfairly raising rent on poor families.

These are the types of injustices that are too small for someone like the Hulk to deal with but just right for Mr. Barton.

Fraction does a fantastic job of painting him as the everyman’s hero of Queens New York. David Aja’s art felt like something I would see drawn on a subway wall and Matt Hollingsworth’s coloring gave the story a Bohemian motif to match the grittiness of the story.

As the kids say these days, this issue has tons of street credit.

A side note; anyone know why one of the variants has Spider-Man surrounded by the many incarnations of Doctor Octopus? It’s a cool cover and the one I purchased, but I can’t seem to discover the reason for it’s creation. Please let me know in the comment section below. Thanks! 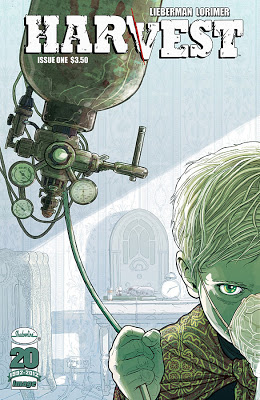 Harvest examines the nightmare of Dr. Benjamin who once led a life of prestige blanketed by arrogance and bravado.

Circumstances led him to his current occupation of harvesting and trafficking human organs. While his character is intriguing; Benjamin is a hard character to feel sorry for considering he had cocaine residue under his nose while his medical license was being revoked.

This comic reads like a horror film that bleeds as much as it leads down its dark and captivating plot.

Colin Lorimer’s cinematic depictions makes the images stand out and produces the best artwork of the week.

If you are looking for something different and interesting from cover to cover, you found it! 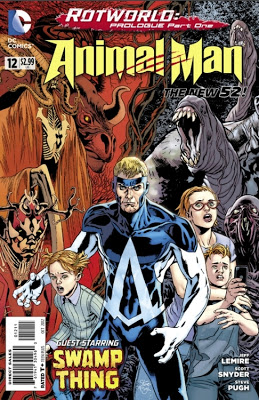 This is not exactly my favorite comic book series, but I have to give credit where credit is due. Animal Man has been a cult favorite of DC Comics new 52.

The books first issue was considered by many to be

the best of all of the first issues released last September. This issue is part one of the “Rotworld Prologue” crossover featuring Swamp Thing.

The narration is top notch and kept my attention from beginning to end. The art brings everything to life from figure work to actions and things going on in the back ground.

Buddy’s fight against the Rot is more personal than any other fight going on in the DC Universe. His son is sick and his family is in danger as they fight alongside their super-powered father. Part two of this story arc takes place in Swamp Thing #12 also released this past week. 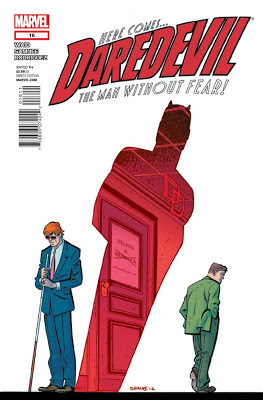 This is a can’t miss Daredevil issue that changes everything for Matt Murdock.

Iron-Man rescued the Man Without ear from the clutches of Doctor Doom. Hank Pym shrinks himself to repair the damage done to Matt’s brain while destroying the nanobots as well.

During this process, Matt starts experiences Pym’s memories as if they were his own.

On the other side of the coin, Pym loses his sight and experiences what it is like to see the world the way Matt Murdock does.

Back on the lawyer side of things, Foggy Nelson found something in Matt’s desk that brings about some crazy results.

Mark Waid does it again and provides comic book fans with another phenomenal issue. The ingenuity in his storytelling is something that is rare and astonishing. The art duo of Samnee and Rodriguez is on point as always and caps off a truly marvelous book.

Here are some comic books that didn’t make the list but may just tickle your fancy.

The Man of Steel performs surgery on an injured Lois Lane in the midst of mental warfare in downtown Metropolis. Plus, Is Johnny Clark already gone?

Ultimate Comics Spider-Man #13  (Marvel Comics)
The first installment of the “Divided We Fall” story takes place in the wake of Uncle Aaron’s (Prowler) death. Spider-Man is wanted for murder and only Captain America can help.

Mind MGMT #3 (Dark Horse Comics)
Underrated series that is starting to pick up some steam. Could be one of Dark Horse’s strongest titles in the not too distant future.

Justice League International #12 (DC Comics)
The final issue set the stage for something to come that suggest we have not heard the last of this group. Plus, a member resigns.

The Spider #4 (Dynamite Entertainment)
Good story, worse kept secret identity ever. Wentworth (The Spider) has to deal with the villain, Anput, threatening those close to him while fighting off rabid zombies in a baseball field. Some cool stuff for sure.