Joe Kubert’s Tarzan of the Apes: Artist’s Edition out in September
Limited Remarqued Edition also available from IDW in October. 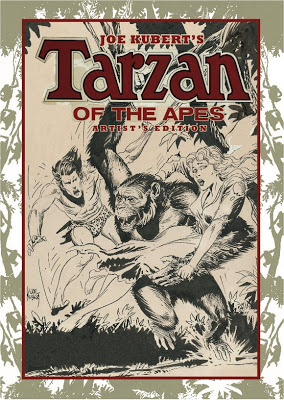 Joe Kubert’s Tarzan of the Apes: Artist’s Edition
is scheduled to be in comic book stores the last week of
September. Collecting the entire four-part origin story of Tarzan, as
well as two single part adventures, all adapted by Joe Kubert from the classic Edgar Rice Burroughs stories.

Additionally, a signed, numbered, and remarqued version will be
released in October and is only available through IDW Publishing.
Limited to 181 copies, and each with a unique head sketch of Tarzan by Joe Kubert, IDW will donate $50.00 from each copy sold of this special edition to a scholarship fund in Joe’s name established at the Joe Kubert School of Cartoon Art.

“It was a great honor for me to work on this book.
Joe Kubert’s enthusiasm for the project knew no bounds, he sounded as happy as a kid at play when we talked about it.” said editor Scott Dunbier.

Both the regular and remarqued edtions are available for pre-order now.

What is an
Artist’s Edition? Artist’s Editions are printed the
same size as the original art. While appearing to be in black &
white, each page has been scanned in COLOR to mimic as closely as
possible the experience of viewing the actual original art—for example,
you are able to clearly see paste-overs, blue pencils in the art,
editorial notes, art corrections. Each page is printed the same size as
drawn, and the paper selected is as close as possible to the original
art board.

Visit
IDWPublishing.com to learn more about the company and its top-selling books. IDW can also be found at https://www.facebook.com/#!/idwpublishing and https://tumblr.idwpublishing.com/ and on Twitter at @idwpublishing.

IDW is an award-winning publisher of comic books, graphic novels
and trade paperbacks, based in San Diego, California. Renowned for its
diverse catalog of licensed and independent titles, IDW publishes some
of the most successful and popular titles in the industry, including:
Hasbro’s The TRANSFORMERS and G.I. JOE, Paramount’s Star Trek; HBO’s
True Blood; the BBC’s DOCTOR WHO; Nickelodeon’s Teenage Mutant Ninja
Turtles; Toho’s Godzilla; Wizards of the Coasts Magic: The Gathering and
Dungeons & Dragons; and the Eisner-Award winning Locke & Key
series, created by best-selling author Joe Hill and artist Gabriel
Rodriguez. IDW is also home to the Library of American Comics imprint,
which publishes classic comic reprints, and Yoe! Books, a partnership
with Yoe! Studio.


IDW’s critically- and fan-acclaimed series are continually moving
into new mediums. Currently, Jerry Bruckheimer Films and Disney are
creating a feature film based on World War Robot, while Michael Bay‘s
Platinum Dunes and Sony are bringing Zombies vs. Robots to film.