This 2009 bit of misogynistic British zombie mayhem is 48% fresh on Rotten Tomatoes, where 48% of the audience report liking it.

Synopsis
Vince (Stephen Graham, who played Tommy the Tit in Snatch) has just gotten a divorce. His friends Neil (Danny Dyer, who’s famous for stuff I haven’t seen), Mikey (Noel Clarke, who played Micky on Doctor Who, so his character name is an in-joke), Graham, Matt, and Patrick decide to cheer him up (another friend, Bansky the Lovable Loser, will catch up with them). 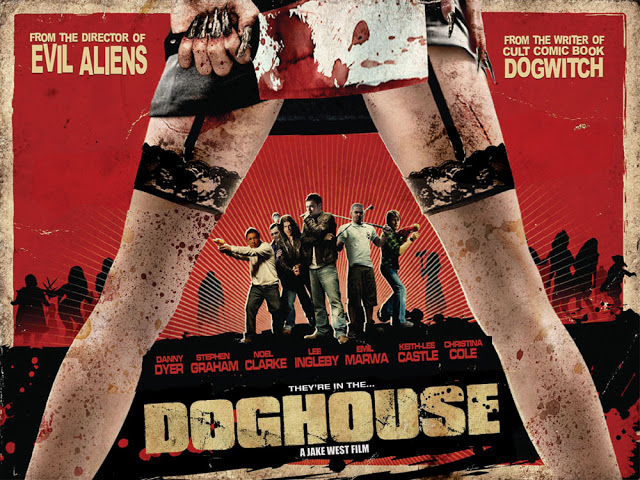 They’re going to take Vince out of London, where he’s miserable, to the tiny village of Moodley. They plan to hole up in Mikey’s Nan’s house, drink beer and watch a bit of footy on the telly. Except that there’s no one in Moodley, when they arrive…

Verdict
Shaun of the Dead it ain’t. There’s gore and more after the break – in case the video didn’t make that perfectly clear.

Of course, you never really expect much from independent zombie movies, right?


Well, let’s start with the basics and see what happens.

First we need to acknowledge the elephant in the room: This is a movie about men beating up women. Granted, the men are defending themselves against female zombies, but that doesn’t change the basic message. That concept is a deep hole for a movie to dig itself out of. 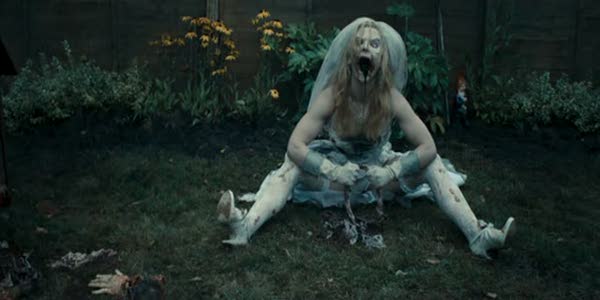 We definitely have characters, in a context. It’s contemporary Britain, where cannibalistic demonic women don’t normally exist. The characters get sketched in quickly. One’s a geek, one’s gay, one’s a lady’s man, one’s divorced, one’s a neglectful husband, and one’s way too into golf as a method of spiritual self-realization.

In fact, the film sets us up not to like the characters, with the possible exception of Vince. We know we’re going to watch a zombie movie, so the characters can be jerks as long as they’re entertaining jerks. In fact, the worse they are, the more we look forward to their inevitable demise at the hands of the zombies…or their repentance and reinvention as noble heroes. 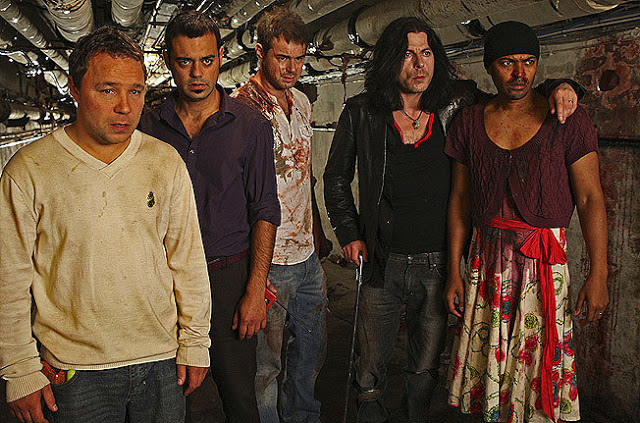 Sadly, Doghouse fails to deliver that last part, although the cast is big enough that many of the guys can get chomped on by Moodley’s female residents without the movie ending prematurely.

I’ll go into more detail after we review the three-act story structure. 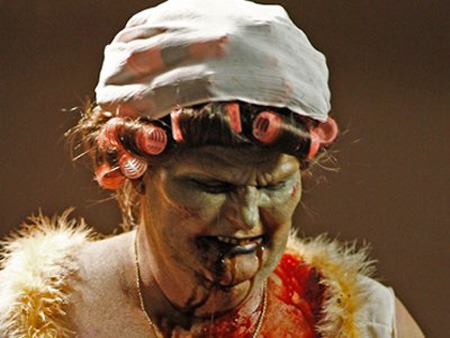 In the case of a zombie movie, Act I is really the establishing act. We meet the characters, learn the context, and introduce the zombies only at the climactic transition to Act II.

One of the brilliant things about Shaun of the Dead is the way it transitions between Act I and Act II, and how it decouples the transition from the characters’ Ghost Ship Moment (the moment when their understanding of their situation catches up with the audience’s understanding).

In Act II, the characters in a zombie movie run for their lives. They learn more about the zombies. They suffer casualties. At some point, they choose a course of action, fight or flight. That sets Act III into motion. 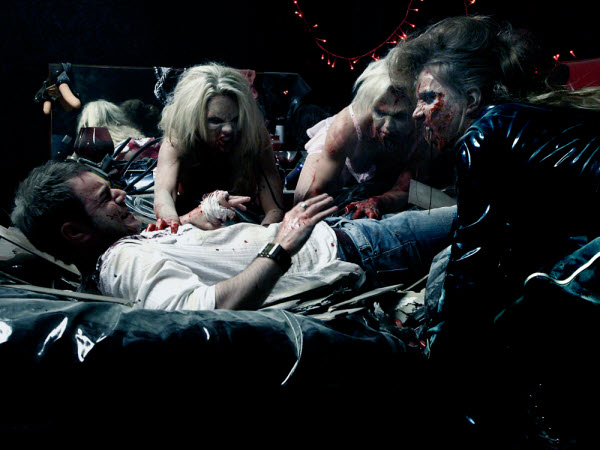 We know (because we’re all super smart, and you’ve all been reading every single one of my columns religiously – I know you’re out there, I can hear you breathing) that each transition from act to act comes with an increase in tension.

In a zombie movie, the increase in tension leading into Act II is simply the existence of flesh-eating monsters. That change in context, and immediate threat to our characters, spikes the tension the level if the filmmakers are doing their jobs at all well.

Doghouse handles this well. The zombies are unexpected, confusing, and an immediate threat to our characters. 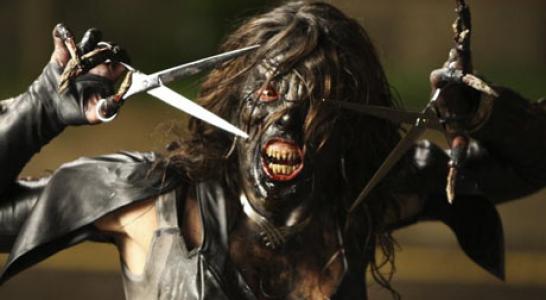 The increase leading into Act III should come from worse/more monsters or a loss of resources (losing a safe haven, losing the chance of rescue, losing transportation, losing weapons, or even running out of time). Sometimes, in a zombie movie, this increase comes from having to fight zombie versions of loved ones who died earlier in the movie. Other times it comes from tension within the group of survivors, who differ on how to survive the zombies.

Here, Doghouse stumbles again. Once it establishes the zombies, they’ve got nowhere else to go. They try to make things worse by having the cannibals mutate, but we don’t care. The characters hear that their worst nightmares are in the woods outside Moodley, but they movie never backs that up. 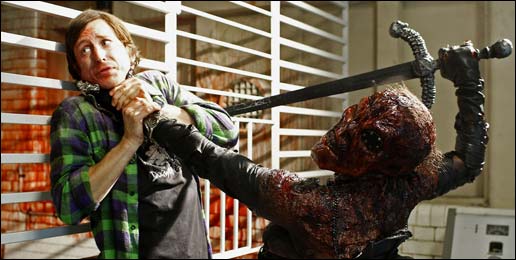 That makes two main flaws in the basics of Doghouse.

First, Jake West and Dan Schaffer (director and writer, respectively), can’t decide on their sexual politics. If the characters were unapologetically sexist, the film could go one of two ways and get away with it.

The misogyny could cost them. Treating women poorly, underestimating women, or taking sexual advantage of women could get them killed. That would be politically correct enough.

Alternately, the movie could celebrate its misogyny, baiting the PC police and rising to the level of satire. It could run straight over the top, spit on the sign that says “Too Far,” and keep right on going. 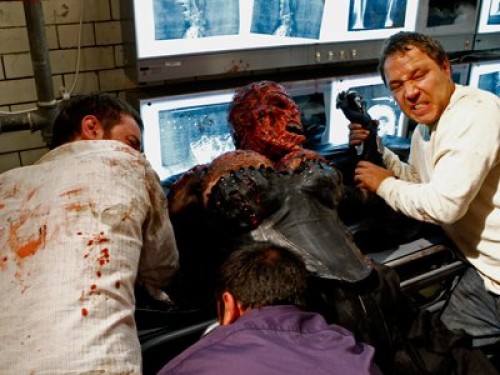 Sadly for us, Doghouse chickens out in both respects.

Like you, I realize that the alternative is to have richer, more developed characters. Rather than sketching in that they are chauvinist pigs, we’d have to see what brought them to their current state. Even when we see wives yelling at the characters in Doghouse, our sympathy is with the wives. They’re not shrews. They’re right to be mad at the man-boys they married.

In other words, we’d have to change the characters and the context. Make the characters beaten by life and pushed into further misery by the women in their lives. Then, when they have to beat up female zombies, they’re asserting themselves as human beings and reaching for some dignity.

Doghouse isn’t that kind of movie. 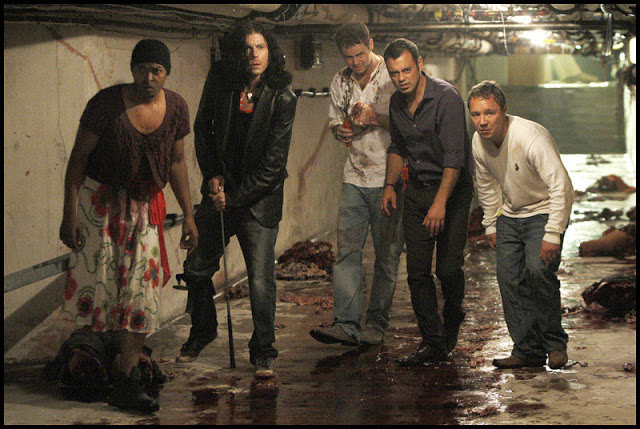 Doghouse also fails to increase tension beyond the appearance of the zombies.

In fact, I think that most of the criticism leveled against Doghouse comes from the mess the film makes of the sexual politics. No one points out the great special-effects, make-up, and prosthetics. They criticize the acting, which is grossly unfair and just demonstrates the critics haven’t watched a truly bad movie in a long time. Seriously, guys – watch a SyFy original some time. Doghouse’s acting is Oscar-worthy compared to most of those turkeys.

Doghouse is the kind of movie that you watch with your mates on a Friday night with a belly full of beer and cheap take-out, while the women in your lives are out on the town. It’s fast-paced, simple, and entertaining – if you’re too drunk, or too insensitive, for the men-beating-up-women imagery to bother you.

Personally, I’d rather watch Shaun of the Dead or Lesbian Vampire Killers.