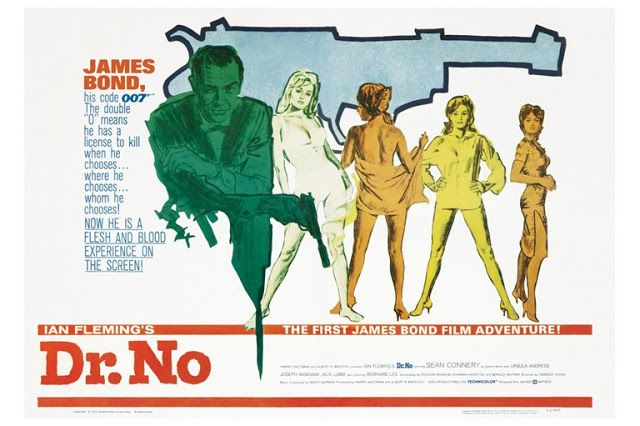 THE GOLDEN ANNIVERSARY OF DR. NO 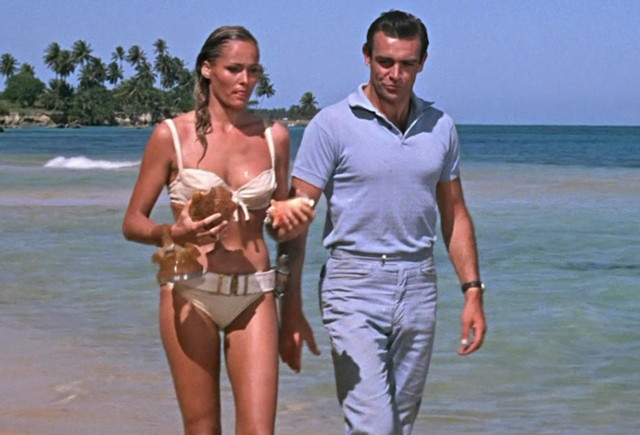 In celebration of the 50th anniversary of the James Bond
film franchise, AMC Theatres, Metro-Goldwyn-Mayer Studios and Park
Circus are bringing the original James Bond film, DR. NO, to 50 theaters
nationwide on Monday, September 24 at 7PM. Tickets for the event are
just $7. SKYFALL, the latest installment of the Bond adventure, from
Albert R. Broccoli’s EON Productions, Metro-Goldwyn-Mayer Studios and
Sony Pictures Entertainment, hits theaters on November 9.

“Bond is an iconic character that has spanned 50 years and garnered
generations of followers,” said Robert J. Lenihan, president of AMC
Programming. “As the excitement for SKYFALL continues to build, we’re
excited to bring the original story back for James Bond fans.”

Every guest will receive a Commemorative 50 Years of James Bond Print.
In addition, each participating AMC location will give away one Bond 50
complete collection, which showcases all 22 classic films on Blu-ray
for the first time ever in one cool, sleek collectible box-set – retail
value of $299.99. The Blu-ray set is available in stores Sept. 25.

To purchase tickets and see the list of the 50 participating theatres, please visit www.amctheatres.com/drno.

ABOUT EON PRODUCTIONS
EON
Productions Limited and Danjaq LLC are wholly owned and controlled by
the Broccoli/Wilson family.   Danjaq is the US based company that
co-owns, with MGM, the copyright in the existing James Bond films and
controls the right to produce future James Bond films as well as all
worldwide merchandising.   EON Productions, an affiliate of Danjaq, is
the UK based production company which makes the James Bond films.   The
007 franchise is the longest running in film history with twenty-two
films produced since 1962.  Michael G Wilson and Barbara Broccoli
succeeded Albert R ‘Cubby’ Broccoli and have produced some of the most
successful Bond films ever including CASINO ROYALE and QUANTUM OF
SOLACE. They are currently producing the 23rd film, SKYFALL.
ABOUT METRO-GOLDWYN-MAYER STUDIOS INC.
Metro-Goldwyn-Mayer
Studios Inc. (“MGM”) is a leading entertainment company focused on the
production and distribution of films and television content globally.
The company owns one of the world’s deepest libraries of premium film
and television programming.  In addition, MGM has ownership interests in
domestic and international television channels, including MGM-branded
channels. For more information, visit www.mgm.com.
ABOUT TWENTIETH CENTURY FOX HOME ENTERTAINMENT
Twentieth
Century Fox Home Entertainment, LLC (TCFHE) is a recognized global
industry leader and a subsidiary of Twentieth Century Fox Film
Corporation, a News Corporation company. Representing 75 years of
innovative and award-winning filmmaking from Twentieth Century Fox,
TCFHE is the worldwide marketing, sales and distribution company for all
Fox film and television programming, acquisitions and original
productions on DVD, Blu-ray Disc Digital Copy, Video On Demand and
Digital Download. The company also releases all products globally for
MGM Home Entertainment. Each year TCFHE introduces hundreds of new and
newly enhanced products, which it services to retail outlets from mass
merchants and warehouse clubs to specialty stores and e-commerce
throughout the world.
About Park Circus LLC
When
it comes to classic, cult and back catalogue cinema, Park Circus is the
first and last word. An impassioned and dynamic film sales and
distribution company with years of experience helping audiences
experience classic films back on the big screen throughout the world.
Park Circus represents thousands of titles from several high profile
studios and is a pioneer in making classic films available in Digital
Cinema format.  Park Circus LLC represents a number of studios for the
US domestic market, including Metro Goldwyn Mayer Studios, ITV Studios,
Miramax Films, Channel Four Television Corporation and Samuel Goldwyn
Films.
About AMC Theatres
AMC Theatres®
delivers distinctive and affordable movie-going experiences in 338
theatres with 4,865 screens. The company operates 22 of the 50 highest
grossing theatres in the United States, including six of the top ten.
AMC has propelled industry innovation and continues today by delivering
premium sight and sound, enhanced food and beverage and diverse content.