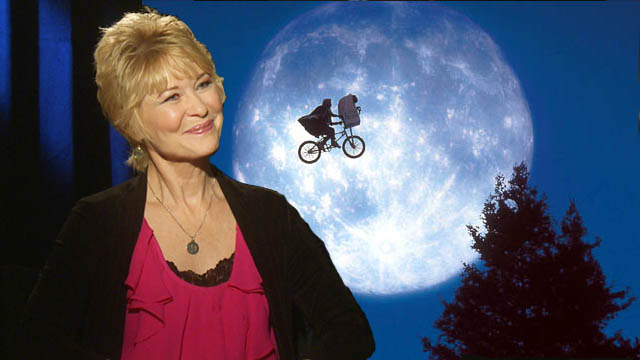 Very few actresses in Hollywood have had a career as long and varied as Dee Wallace.

She’s worked with some of the most interesting genre filmmakers including Peter Jackson, Joe Dante, Lewis Teague, Rob Zombie, and some guy named Steven Spielberg.

Thirty years ago, Wallace played Mary, the single mother of three children; Michael, Elliot and Gertie in Spielberg’s E.T. The Extra-Terrestrial, on of cinema’s modern masterpieces, a fairy tale that was embraced across the globe.

Tomorrow, E.T. arrives on Blu-ray and I had the opportunity to speak to the warm, charming and iconic Ms. Wallace about her experiences making the film.

You’ve played a mother dozens of times in your career, but E.T. was the first; what was the experience like playing a mother before becoming one in real life?

Well, people ask me that, “How could you play a mother so well before you were a mother?,” and I say, “Well, I had a mother.”

So I guess that’s my only answer; I had a mother and I watched her and she actually was very much like Mary.  She was very hassled; for all practical purposes she was a single mom, because my father was an alcoholic and never very present.  So she spent most of my life that I remember very hassled; going to work, trying to raise us, taking us to church; doing all of the stuff that Mary had to juggle.

I think that’s my answer, “I watched my mom and a lot of this was her.”

Today E.T. would likely be a computer generated character, but what was it like playing opposite E.T. and did you have any idea when making it that it would resonate the way it did worldwide?

No, you don’t.  You don’t even think about that when you are doing the movie.  You know you have a beautiful script and you know that you want to do the very best that you can and turn out the best product that you can, but you don’t think about it being a blockbuster or how big that it’s going to be because really the public is the only one who can decide that.

As far as working with E.T., Steven was very concerned and focused on keeping E.T. as much like another character as we could for the kids.  So you never really saw him being worked that much and if he was being worked by hydraulics, the guys were behind walls so that you weren’t really present with them.   If there was a little person in the suit, they were always put in before E.T. came to the set.  So it really was like working with another actor, quite frankly.

What was it like observing Drew, Henry and Robert and how they interacted on set with E.T.?

Henry and Robert of course knew that he was a puppet and they knew that he wasn’t real.  Drew on the other hand, not so much.  We would find Drew going over to talk to E.T. when he was standing to the side of the stage so Steven always had someone on him so he could react a little bit to her.

It was very easy for all of us to spin our imagination to allow him to just be the little alien that he was.

I read a quote that you said that you considered E.T. to be the modern generation’s Wizard of Oz…

Are you able to watch and enjoy the film or are you someone who doesn’t like to watch their own performances?

No, I can now. Of course I’ve now seen it about a hundred and fifty times.  I still cry.  I still laugh.  But I don’t look at it and go, “Oh this was the day that we were doing that” and “this happened here” and “wow!  Why did I give that reaction?”  I just watch the film.  I think you just get taken by the film if you just sit back and let yourself.

Where do you think Mary and her kids would be today?

I think Mary would be very much like me; full of energy and doing all of the stuff that she loves and remembering the great lesson that E.T. taught her which was, “Not go into fear, keep your heart light open and on and create out of love.”

I’m totally geeking out over Homeland and Dexter and Boardwalk Empire.