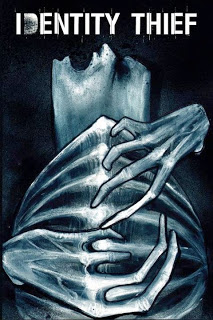 Identity Thief
Writer: Bryant Dillon
Art: Meaghan O’Keefe
Producer & Editor: Barbra Dillon
Co-Producer: Sam Rhodes
Publisher: Fanboy Comics
Website: https://www.identitythiefcomic.com/Identity_Thief/Home.html
Price: $11.99
Children often fear the monster in the closet or the creature
under the bed.
In Daphne and Craig’s case, the mysterious monster in the closet
of their new apartment is anything but imaginary.
Fanboy Comics, who previously released the
graphic novel, Something Animal are back with a chilling tale called Identity
Thief.
Bryant Dillion’s dialogue effectively accomplishes what it set out to
do. The artwork of Meaghan O’Keefe is the highlight of this book. In her first
comic book undertaking, O’Keefe, through her imagery,
conveys what is transpiring in captivating fashion. This thing, this hatch,
lurking in Daphne and Craig’s closet gnaws at every fiber of your being until
the disturbia reaches its climax.
There is a lack of dialog that may be
annoying to some, but the art makes up for the missing word balloons. Halloween
is right around the corner and this graphic novel may be the trick,
or the treat, you have been looking for.
For a preview of the book, click HERE.