Back in September, which now seems the distant past, Amazon announced a new line of next generation Kindles, including the brand new Kindle Paperwhite.

I pre-ordered one immediately.

It finally arrived, and it’s one of the most satisfying gadgets I’ve ever owned. 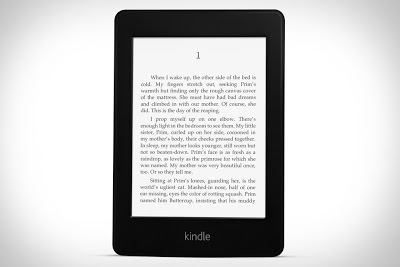 Amazon’s Kindle has been out for years now, and it’s gone through many iterations.

I’ve always been tempted to get one, but never could pull the trigger. When the iPhone 4 came out, with it’s perfect Retina display, I began to use that for reading ebooks. When the 3rd generation iPad came out, it too with a Retina display, I began reading ebooks with that. The problem with both of these options, is that although the text was rendered perfectly, they were still quite bright, even when dimmed, and the iPad was on the heavy side, while the iPhone was a bit too small.

There have been plenty of Kindles to choose from, but I couldn’t bring myself to spend the money on one when the iPhone and iPad were getting the job done, despite not being ideal. 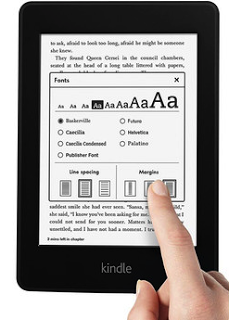 When the Kindle Paperwhite was announced, I knew right away I’d want one. It has a mild, uniformly lit display, but can be dimmed all the way off, yet of course remains readable because of e-ink.

It’s feather-light, and feels well constructed. The rubberized case feels really good in hand. The touch-screen is responsive. The battery lasts forever. There are no unnecessary bells and whistles. It is minimalism perfected. It just works.

There are only a few negatives.

One, I paid a bit extra to get the version without ads.

I understand that the ads are only on the screensaver, and are elegant. But ads drive me crazy. I don’t want to support the concept of cheaper devices in exchange for ads. It’s a slippery slope. Unfortunately, it turns out that I’m still forced to look at “recommendations” when browsing my library, unless I switch from icon mode to list mode.

I find this infuriating. I don’t want a single recommendation, especially when I paid extra to specifically not have any ads.

Another negative is that it doesn’t come with a case. I understand that most devices like this do not come with cases. But a simple fabric sleeve would have been better than nothing.

Also, though it comes with a USB charger cable, it does not come with a wall wart. You must plug it into a computer to charge. I’m not into this. I want to plug it into a wall outlet to charge while I leave it on my nightstand.

I realize that these are cost savers for Amazon, and they don’t prevent me from recommending the Paperwhite.

I highly recommend the Paperwhite.

It’s a perfect device for reading. Amazon really nailed it with this one. It would be truly magical if they could get it to $99. I’m sure they will eventually. But for now, it’s worth the $119 with ads and $139 without ads.

In this article:Books/Literature, Computers/Technology, Gadget/Tech Review, Written by Bill Machon

Tarzan, Conqueror of Mars Written by Will Murray Cover by Romas Kukalis Published by Altus Press   Author Will Murray is a chameleon. His...