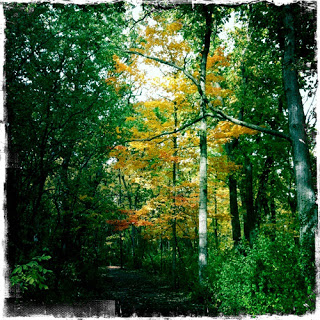 Autumn has come to the Midwest.

The days are getting shorter. The geese are honking loudly in the ecstasy of their southward flights.

On sunny days, the light is like a golden berry, and sets the crimson, orange, and yellow leaves aglow.

When it rains, everything looks brown-grey, sepia-toned, and the chill damp gets under my skin and into my bones.

I wear old sweaters full of moth-holes, drink too much coffee, and get even more introspective than usual.

And these are the songs I am listening to.

Lotte Lenya, German cabaret star and actress of stage and screen, sings a song written by Kurt Weill, accompanied by an orchestra directed by Maurice Levine. Listen to the cinematic sweep of the strings and that melancholy accordion, as Lotte intones: Oh, it’s a long, long while from May to December, but the days grow short when you reach September. When the autumn weather turns the leaves to flame, one hasn’t got time for the waiting game.

So many people have recorded versions of this song, but this version by Duke Ellington and His Orchestra, with Ozzie Bailey on vocals, is one of my absolute favorites. First, Ozzie sings it in French, and it was originally a French song – “Les feuilles mortes,” which translates literally to ‘the dead leaves’ – written by Jacques Prevert. Then, there is the musical interlude, with Duke’s beautifully understated piano, and the weeping violin. The vocals return, this time in English, to say: Since you went away, the days grow long, and soon I’ll hear old winter’s song. But I miss you most of all, my darling, when autumn leaves start to fall. (I also recommend tracking down the alternate take, as the violin in that version is even more goosebump-inducing.)

This tune was written by Norman Curtis and Oscar Brown Jr., and Oscar Brown himself recorded a pretty killer version of it, but I have to say I love Nina Simone’s take on it much, much more. The instrumentation in this recording is sparse, taking a backseat to Nina’s voice. And that’s the thing about this version that makes me love it so – her voice. She sounds truly hollowed out by heartache, betrayal, and sorrow when she sings: I asked that old rag man how much he would pay for a heart that was broken when you went away. For a burnt out old love light that no longer beams, and a couple of slightly used second hand dreams.

In autumn, I turn to the sad ladies of jazz and blues who understand my loneliness. Because I am always lonely in autumn. And in this track, the incomparable Ms. Peggy Lee belts out the story of my life: I’m moonin’ all the mornin’, mournin’ all the night. And in between it’s nicotine, and not much heart to fight.

Irma Thomas is the unsung queen of New Orleans soul. She was a contemporary of – and just as talented as – Aretha Franklin, Gladys Knight, and Dionne Warwick, but she never achieved the level of commercial success they did. Which is a shame, because more people need to know her music. Particularly this track, from 1962. Despite its upbeat swing and the sweet voices saying ‘drip drop, drip drop’ in the background, this song is a real tearjerker. Sit by the window watching the autumn rain fall, and give this a listen. I’ve got the blues, so bad, I can hardly catch my breath. The harder it rains, the worst it gets. This is the time, I’d love to be holding you tight. I guess I’ll just go crazy tonight.

Sometimes, life just breaks your goddamn heart, and all you can do is sing about it. Johnette Napolitano always does such a good job of that. In this song, which is about a friend that died of AIDS, her pained rasp is full of rage at the unfairness of it all. In autumn, we can all raise our glasses to friends and loved ones that passed too soon, and Underneath the chilly grey November sky, we can make believe that Kennedy is still alive. We’re shooting for the moon and smiling, Jackie’s driving by. They say, “Good try.” Tomorrow Wendy is going to die.

7. The Mountain Goats – In the Hidden Places

I’ve noticed that people seem to fall into one of two camps when it comes to The Mountain Goats/John Darnielle. They are either rabid fans who love love love everything that Darnielle does, or they hate all of it. I do not fall into either group. I am not a rabid fan, I don’t love all of it, but I do think John Darnielle is an extremely talented songwriter with a knack for – to bastardize something he himself said – wresting small glimmers of light and hope from the screaming places. Or the hidden places, if you will. The entire album this song is from (Get Lonely) is perfect for this time of year, but this song is, in particular, because: Autumn came around like a drifter to an on-ramp. There were wet leaves floating in gutters full of rain. Took to walking barefoot around town, melodies from gradeschool kicking in my brain.

1. Nick Cave and the Bad Seeds – The Carnival Is Over

Carnival season ends at the beginning of October, and doesn’t start up again until May. Imagine that this song is from the score to a non-existent film about a girl who falls in love with a carnival showman. I could be the heroine in that film; the heroine could be based on me. Imagine her (my) carnival lover leaning out the window of the train or the caravan, singing this song to her as he gets further away: Oh my love, the dawn is breaking, and my tears are falling rain. For the carnival is over; we may never meet again.

This song has a definite tinge of the gothic Americana that Reverend Glasseye is known for, but then listen to that klezmer-style clarinet. And it also owes something to Leonard Cohen – from the Hallelujah chorus on down to the lyrics. Listen to it build, just like a storm. And like this rain, I move it along, remembered only through my pathetic song. But the wind, it howls, and the mobs, they roar. The storm is coming in.

This song is called “Minute” but it clocks in at 1:06, what’s with that? Oh, whatever, it’s a perfect just-over-a-minute song, melodic punk rock with raspy vocals and a core of angst. And Ghost Stories, the album this track is from, was the perfect soundtrack to a three-month-long nervous breakdown I had. In the fall of 2000, I attended Northwestern University (alma mater of Brendan Kelly of The Lawrence Arms!), and I hated every second of it. It wasn’t at all the right college for me, and because of that, and many other reasons, I just sort of…unraveled. I would listen to this song while waiting for the el. I’d stand on the platform, half-drunk, chainsmoking (though it was against the CTA rules), waiting to catch the final train of the night from Chicago back to Evanston. I’d scream the words along with this song: Gone and forgotten, my stomach feels rotten. My shoes are all soaked and my socks are all cotton. My insides are black from the smoking and pain, and every damn song is fucking the same. This same goddamn train glides soft through the rain, and I sit and dizzily wait.

When I conceived of this installment of my column, I thought it was all songs about autumn; now, I realize it could just as easily be titled ‘Rain Songs,’ as at least half the songs mention rain or storms. It works, perhaps because I associate autumn with rain. This pop punk gem by J Church is another song I associate with public transit, and with a particular autumn of my life. Except, where I associate the previous track with the autumn of 2000, and the Chicagoland area, and the CTA, I associate this track with the autumn of 2010, and the Bay Area, and BART. So I went home like I normally do and I put on something dry, I went out to get a coffee, read a book about anarchy, and watched the commuters walk by. Tears from the sky, I’m satisfied that I can’t stop the rain. Can’t justify, and I can’t define, and I can’t stop the rain, rain.

This song is the title track from the World/Inferno album of the same name. The album is based on the life and film-work of Peter Lorre. Have I ever mentioned that I am in love with Peter Lorre? I am, but that’s not why this song is on this mix. The album was released in September of 2007, and it described everything that was going on in my life and heart and head that autumn. I could have put almost any song from the album on this mix, but I chose this one, because it, like all of World/Inferno’s best songs, will make you want to dance – even when everything is falling down around you. Though I have grown older & graver, the great heart of the world remains ever young. I wasn’t always a monster, I was a prince. Now, so broken, so. Because I can, ’cause no one can stop me. ‘Cause it makes up for things I lost. Because I’m addicted to bad ideas and all the beauty in this world.

Nick Urata starts this song with some spooky-lovely ‘oooh-ooh-oohs,’ and yes, you will feel haunted while listening to it. I believe this track is one of the finest examples of DeVotchKa’s unusual blend of musical styles – rock, jazz, Americana, and Eastern European folk. And I associate this with the autumn of 2005 – why I am telling you about my associations with these songs, I promised myself I wasn’t gonna get autobiographical this time, oh well, too late now – I had just moved to Milwaukee and I knew right away it wasn’t going to be like I’d hoped. I felt haunted by the way it had been in my younger years, before I’d moved there. I felt like – There were ghosts, and they lit up this town, but they left when they sold off the underground. We ain’t welcome here no more.

There are Tom Waits songs for every mood and every season, and this one is for autumn. Maybe it’s because he sings about crows, and crows are such an autumnal bird. (There was a moment of synchronicity, just now – I’m writing this in my backyard, and as I typed that last sentence, a crow landed in a nearby tree and began cackling at me.) Or maybe it’s the lonesome banjo twang, or just that the song is sad but also sweet and hopeful. Well, I’m not dancing here tonight, but things are bound to turn around, though. The only thing I want that shines, is to be king here in your eyes. To be your only shiny thing.