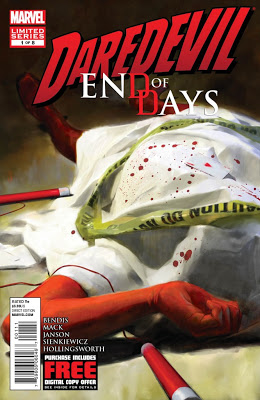 Extra, extra, read all about it!

Daredevil is dead and no one cares. The Man Without Fear’s untimely passing is the backdrop to a much larger picture.

Brian Michael Bendis and David Mack script negatively characterizes the inhabitants of Hell’s Kitchen, and maybe the world. These sentiments are fiercely expressed through the narrative of Ben Urich and the art of Janson and Sienkiewicz.

Daredevil has saved countless lives over the years, but that is lost on people as their own personal lives are all that matter.

That is sad considering Matt Murdock made his life about others, but no one can make time for him. The Kingpin and Bullseye make cameos that leave an indelible impression and Urich tries to fit the all of the pieces together.

He knows there is a story worth telling, but will the plight of a blind hero fall on deaf ears? 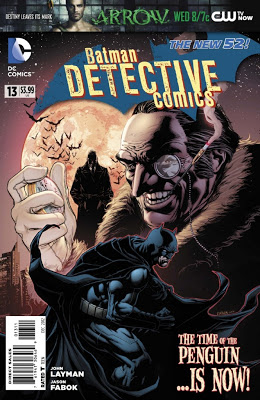 Then, for reasons unknown to me, the second half of his run was anything but.

Some blame it on the tight leash the brass at DC Comics reportedly has on its writers and artists; others feel Daniel’s work is best when he only focuses on solely on the artwork or the writing.

Now, John Layman takes the helm of this iconic series and wastes no time diving in the deep end. If you’ve read Greg Hurwitz’s Penguin: Pain & Prejudice (I highly recommend it if you haven’t) then you know how much the master of the killer umbrella cares for his mother.

He wants to donate money to have a hospital wing named after her.

There is just one small problem: Bruce Wayne had dibs on the same hospital wing and named it after his mother, Martha.

When a gangster can’t get his way, a certain billionaire has gotta go. 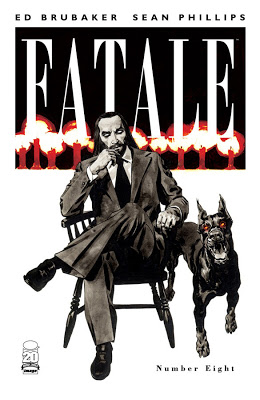 There is something about Josephine that captivates the imagination.

She has a face you can never forget and a beauty, personality and presence that are unlike anything in this world. Those who have had the fortune, or misfortune, of meeting her know this all too well.

This is the real mystery surrounding Fatale despite everything else going on in Ed Brubaker’s enigmatic noir.

Each issue fits like a puzzle piece that brings the reader one step closer to discovering the secret.

The collaborative artwork of Sean Phillips and Dave Stewart delivers on all fronts, from the classic yesteryear touch, to the horror that surrounds it all.

This is another excellent issue in this remarkable series. 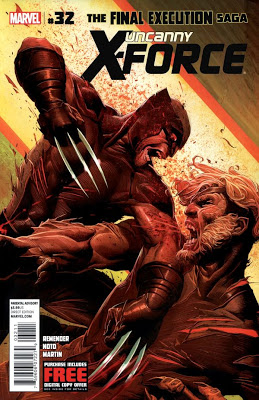 Team up comics are a dime a dozen, but X-Force does it right in spades.

Every character has an important role to play and when the spotlight is on them, if feels like you are reading their ongoing series.

This is the type of writing that sets Rick Remender apart from most. This issue provides the perfect blend of action and storytelling which in this case, is a gift and a curse.

Unfortunately, this series is another casualty of the Marvel NOW initiative.

Let’s dive in to the good stuff, shall we?

Deadpool attempts to rescue Evan, but may need rescuing himself. A Nightcrawler of a different kind has an intriguing conversation with Mystique while Psylocke and Wolverine plan a surprise attack against the Brotherhood of Evil Mutants.

Well, it’s not really a surprise to Sabertooth because he smelled them coming a mile away.

Phil Noto’s flawless illustrations wrap it all together in a nice little bow.

With three issues to go, I can’t wait to see what happens next. 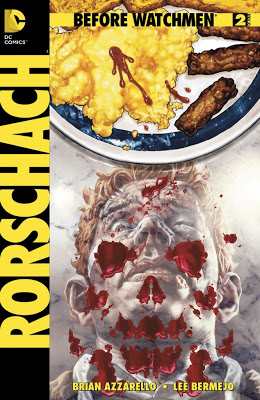 The New York City in the world of Watchmen is a place I can’t imagine anyone wanting to live.

Still, even in the worst of places, there are some things worth fighting for.

Even if that type of fighting means sticking a piece of glass in a pimp’s mouth and punching them flush in the face.

It’s not pretty just an example of the ugly things Rorschach does, all of which are beautifully illustrated by Lee Bermejo.

The journal entry style narrative by Azzarello dives deep into the mind of Rorschach as he lives by a code that works for him.

He doesn’t lose sleep at night over the things he does to the dregs of society. 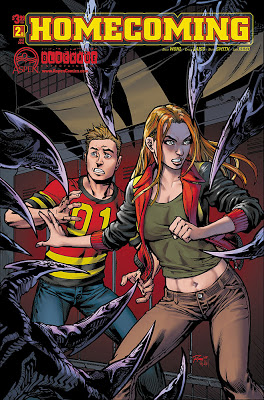 The Homecoming committee at Hillcrest High has a lot more to worry about than dance décor.

UFOs crashing in their school gymnasium sets off a chain of events that affect them.

For example, Jay Ann, who is miss popular, has tentacles growing out of her rib cage.

A “mysterious” woman named Celeste is the key to helping them deal with their new abilities.

What is refreshing about this is the teenagers actually acted like high school kids with high school problems. The cartoon-esque artwork was solid all-around and did what it set out to accomplish.

This series has potential to be something great.

It’s a fun read and you should check out this issue, and the first as well. 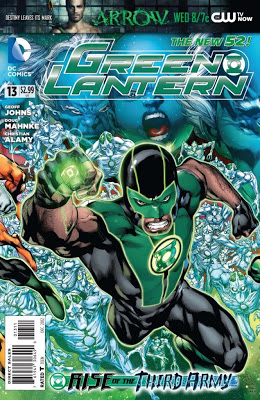 The President and Amanda Waller are not taking chances with an accused terrorist who now wields a Green Lantern ring.

There were a lot of pivotal moments that made this a highly engaging read.

We discover who’s ring he is wearing and The Third Army and a certain super group are hot on his trail.

Geoff Johns throws a lot on Baz’s plate while making it easy to empathize with him and his family.

It’s should be interesting to see how Baz deals with his trials in the next issue considering he doesn’t know how to completely use the ring.

Avengers vs. X-Men #12 (Marvel Comics)
The end is here for the mega event and while its execution could have been better, there are some ramifications that will shake up the Marvel Universe in a major way.

Action Comics #13 (DC Comics)
It’s all about the Phantom Zone and Krypto.

Planet of the Apes: Cataclysm #2 (BOOM Studios)
The fallout from the moon being blown up and crashing down on Ape City shows no prejudice with it’s destructive power.