It’s a James Bond anniversary year, which means lots of marathons and retrospectives.

But the truth that no one wants to talk about is that despite being a 22-film franchise (soon to be 23), most of the Bond movies range from second-rate to downright terrible.

Now before you call him a hater, I challenge you to name 11 Bond movies that you truly believe are good actions movies — I’m just looking for a 50 percent rate of quality.

Given the universal consensus of how dreadful 1) Diamonds Are Forever, 2) The Man With a Golden Gun, 3) The Spy Who Loved 4) Moonraker, 5) Octopussy, 6) A View to a Kill 7) The Living Daylights 8) Tomorrow Never Dies, 9) The World is Not Enough and 10) Die Another Day all are, you’re going to have a hard time getting to 11.

What I find remarkable about the mediocrity of most Bond films is that they almost always fail for the same reasons.

The villains typically either want to destroy the world, cause WWIII (which will have the same end result), or make some humongous power grab, reshaping the world order. As I see it, these plots have little upside and lots of downside.

The bad guys tend to already be extremely powerful and wealthy. They have the resources to live off the grid completely independent of the outside world. Is there any real gain for them in their plot? The only rung left for them to climb is ruler of the planet. And if their plot fails, they stand to lose everything because they’re declaring war on the world. I mean, if you have the ability to convert a volcano into a secret base and or build an underwater city, you probably have the means to start your own country and be its sovereign ruler.

And with the schemes that involve stealing lots of money, I’ve always wondered what exactly it is that these villains are going to do with all that money. If you have no record of wealth and start spending a hundred million dollars here and there, people are going to figure out that you were that person who held the world hostage several years ago. But let’s say that for whatever reason, you just want lots of money.

You’re more likely to fly under the radar and not be caught if you accumulate it incrementally instead of trying to get it all at once through a mega heist that involves everything from tanks and helicopters to space based weapons.

That is, the franchise’s depiction of casual sex was outdated and juvenile by the 1970s. 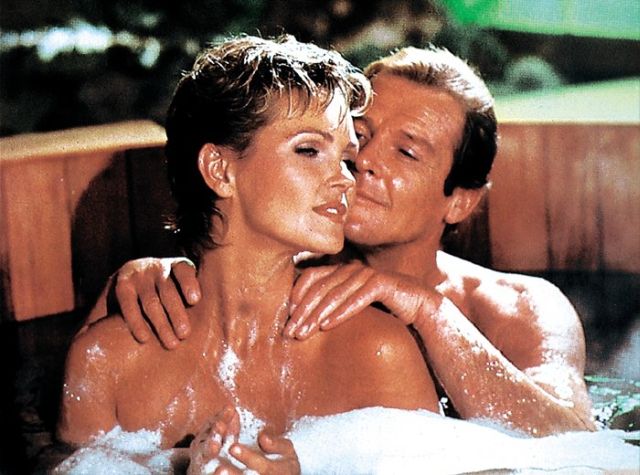 Rather than adapt with the times, they hired my grandfather to write the double entendre, and then just gave up (e.g. Holly Goodhead).

This is why the Roger Moore Bond films became so silly so fast. The movies dealt with sex witlessly and facilely. And it continued into the end of the 1990s with such brilliant dialogue as: “I thought Christmas only came once a year.”

Even my grandfather doesn’t tell jokes that bad. 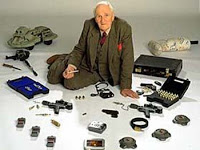 I know that this is one of the hallmarks of James Bond movies, but they often are too fantastical or downright stupid, pushing the movies into silliness territory (e.g. Ghetto Blaster, Aston Martin Vanquish), as well as become deus ex machine plot devices.

And that’s what is so irritating with the gadgets — some how Q perfectly foresees the situations Bond will find himself in, and gives him the precise gadget he will need.

It’s like Philip K. Dick’s Paycheck, except in that story, the hero could really see into the future!

The reasons that Goldfinger is widely considered the best film are pretty obvious, and surprisingly, rarely replicated. 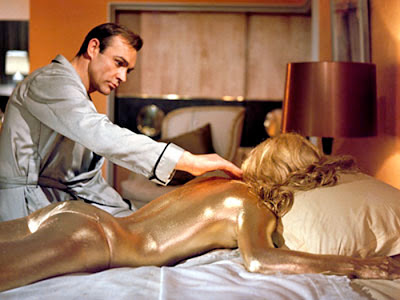 First, the plot is pretty clever without excessively high stakes — it’s the ultimate bank heist, with a bit of a twist.

If James Bond fails, that will suck, but the world will not literally come to an end or, civilization won’t be setback 200 years. The gadgets are similarly low-key, and probably the best remembered of the entire franchise: the rotating license plate and the car ejector seat.

They’re grounded in reality and relatable to our lives — who wouldn’t want rotating license plate and the car ejector seat?

For similar reasons, I’d argue that License to Kill was among one of the best films, if not a runner-up to Goldfinger.

The bad guy’s scheme involved drug smuggling (so nothing outrageous), the gadgets don’t actually help Bond accomplish anything, and it was the first time that Bond really got roughed up (the influence of film’s like Lethal Weapon and Die Hard were pretty apparent).

As for the Daniel Craig films which have received lots of praise, I think they’re just generic action movies.

This is going to sound a bit contradictory, but despite the flaws of all of the previous James Bond movies, at least they felt like them came out of the same cannon — there was a sense of continuity across the 20 films.

Obviously ditching all of the bad habits of the franchise are good, but what’s the point of calling it James Bond if you’re going to eliminate the gun barrel opening?