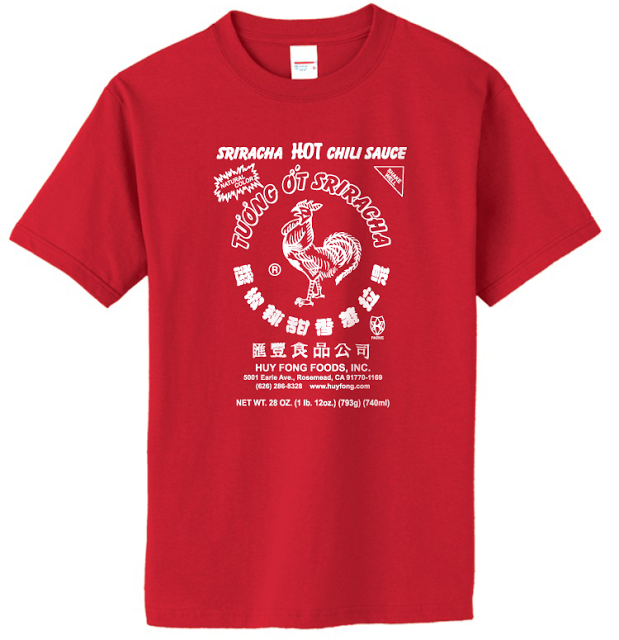 Sriracha Hot Chili Sauce seems to be everywhere these days and since it will most likely end up on your shirt at some point anyway, why not celebrate the famous rooster sauce by wearing a gigantic ode to it.

Besides, you’re gonna need something to wipe out your burning mouth and since the shirt happens to be the same color of the sauce, no one will be the wiser. 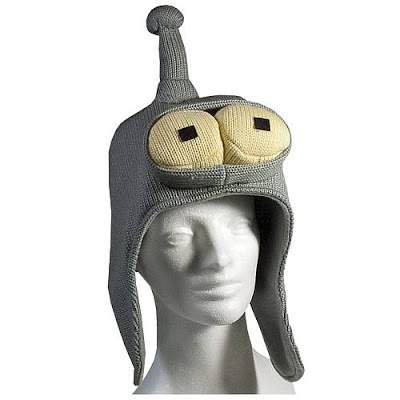 Tell the world to bite your shiny metal ass every time you slip on this cozy knit Bender hat that will keep your noggin toasty warm come Winter…not that you didn’t already tell people to bite you before the hat, but at least this time people will think you are portraying a character instead of simply being an asshole. 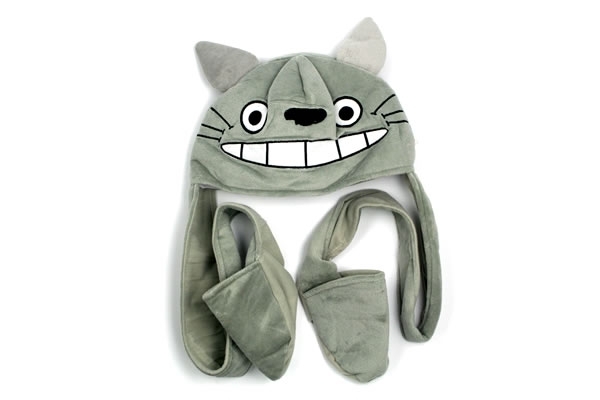 I am not without a soul, contrary to what members of my family might believe, and when I saw the animated film My Neighbor Totoro,  I was filled with a sense of delight that caused my face hole to stretch out (I believe it is also known as “smiling”) for a solid 88 minutes.
Which is why this super sweet Totoro hat/scarf combo is high on my holiday list for anyone who is in love with Filmmaker Hayao Miyazaki’s beautiful masterpiece, and besides, it will look frakking adorable on most everyone.
Guinea Pig Face Tee 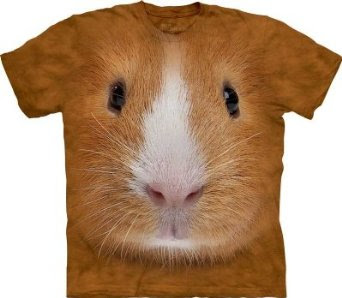 This is a t-shirt with the face of a guinea pig on it.
Are there any questions as to why I am including this as a “must have” this holiday season?
Boba Fett Costume Hoodie 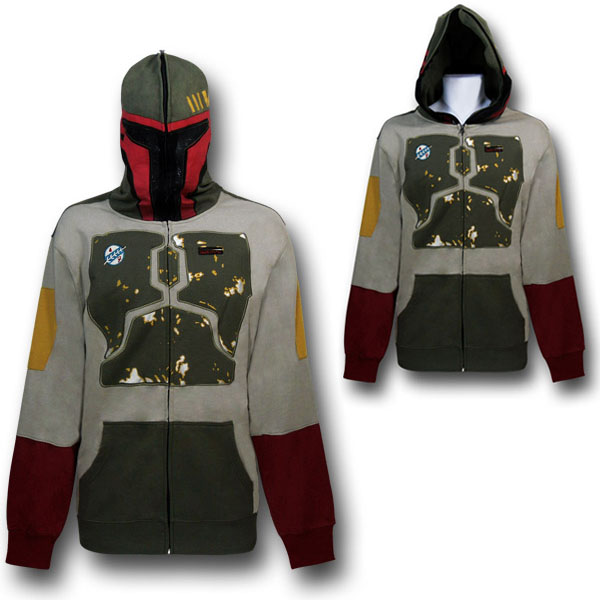 Of all the side characters in the original Star Wars trilogy, none worked their way into the hearts of the fans more than the bounty hunter Boba Fett.  And for those of you whose love for The Fett is so deep that you spend your evenings writing Boba/Solo Slash fiction, then you are in for a real treat with this particular hoodie.
Made from a cotton/poly blend, this hoodie is decorated with embroidered armored plating (purposely distressed to show wear-and-tear), various details to look authentic (like the Mandalorian Crest for instance) and the hood can be worn traditionally or zipped all the way up and around your head so that you can be encased in full Boba Fett-ness (a mesh face panel allows you to see and breathe easily).
Perfect for those days when you want to have someone frozen in some carbonite.
Nintendo Controller Messenger Bag 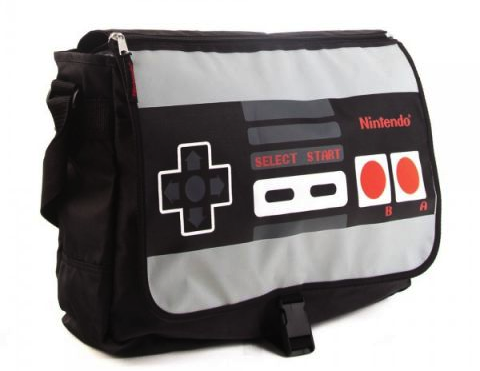 Show the world that while you love all things new and shiny when it comes to consoles and games, your heart will always belong to your first intro into 8-bit goodness, the NES, with this retro-inspired messenger bag.
It’s perfect for schlepping around all your crap while still maintaining your socially awkward nerdiness which has defined you lo these many years.
And, as a plus, it also gives you a perfect intro line when hitting on someone “Wanna play with my buttons?” Of course, that person will probably beat you within an inch of your life, but still, it’s a really good line. 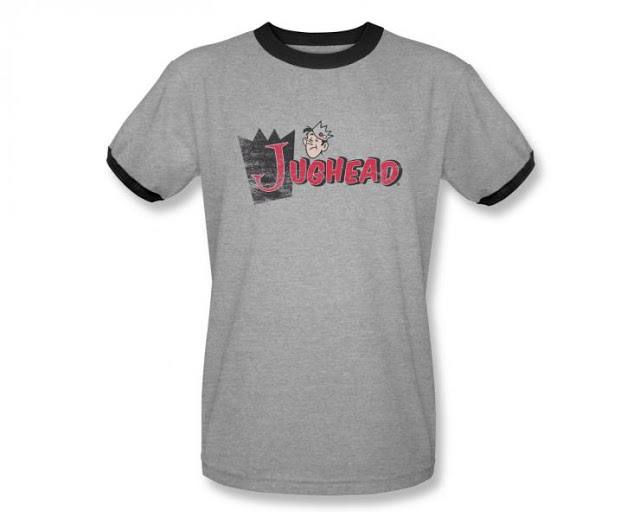 I would have to say that most kids’ introduction to comic books (at least back in the day) began with an Archie comic bought by mom or dad in order to occupy us while the adults were busy drinking Strawberry Daiquiris and playing bridge.
Of course, mom and dad didn’t know at the time that the Archie comics were a gateway drug to harder stuff like DC and Marvel (all the way up to underground comix titles like Cherry Poptart and Zippy the Pinhead), and would eventually lead to their children to hording long boxes of comic books throughout their lives, but hey, it all began with the tales of Archie, Reggie, Betty, Veronica and the beloved Jughead and there’s no better way to thank the ‘rents for their lazy parenting then by sporting a neato Jughead logo tee.
Right?
So give a shout out to mom and dad by wearing this distressed tee at family get togethers and whenever they complain about your lifestyle choices you can point to it and say, “Well, it’s your fault.”
Perfect.
Pac-Man Ghost Rain Poncho 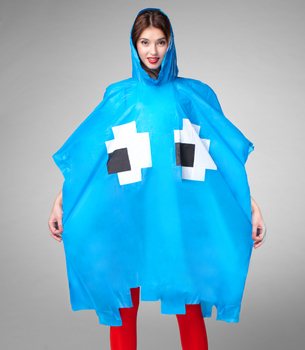 Okay, so you know how the one day that you don’t pay attention to the weather forecast is the day that a torrential rain storm will come barreling through where you happen to be and proceed to soak you to the skin out of spite?

Well, be prepared for weather’s bitchiness by keeping a few of these Pac-Man style rain ponchos in the pockets of your coat (or, in your bag) for those days when you need protection from the elements but still want to look somewhat stylish.
And at $7.50 a piece you can afford to “suit up” every day of the week if you so choose (it’s also perfect as stocking stuffers if you need something cheap to throw in a decorated tube sock)…then feel free to chase random people wearing yellow through the street.

Who doesn’t dig a sailor man who eats a can of spinach and then proceeds to beat the crap out of various bullies as if he were suffering from a really bad Bath Salts trip?
Am I right?
So celebrate the dude by stuffing your torso into a 100% cotton t-shirt that rocks an old-timey version of Popeye back when he looked constantly pissed.
You’ll look awesome.
Werewolf Feet Slippers 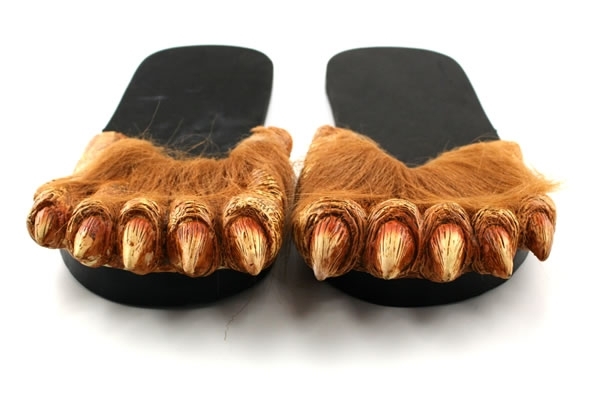 Slippers are the staple food of holiday gift giving, but this year make it extra special by giving those you love a pair of werewolf feet slippers instead of something shoved full of memory foam.

Perfect for all those “Team Jacob” fans in your family who have really disgusting feet. 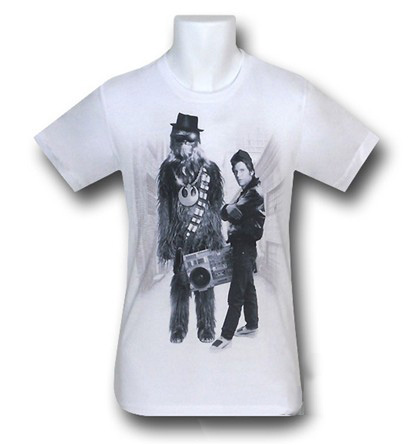 There are two things that I adore right down to the core of my being: Star Wars and early rap (especially The Cold Crush Brothers, Grandmaster Flash and, of course, Run DMC). Put the two of those things together and you got yourself a wicked t-shirt featuring a very pimped out Chewbacca (complete with a gold medallion and boom box) and a hardcore Han Solo throwing out some serious attitude.
Wear this and I guarantee an impromptu rendition of Rapper’s Delight by The Sugarhill Gang will breakout all around you. 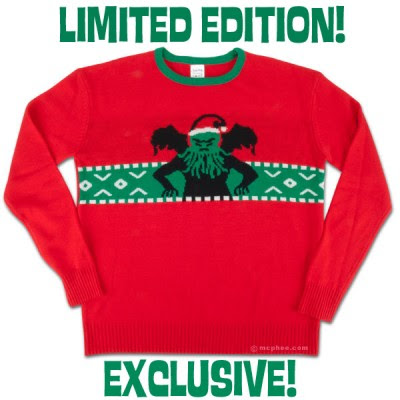 There are a lot of holiday-themed sweaters out there but none that marries the tentacle-bearded one with Xmas (and let’s face it, it’s about time)

Oh sure, you’re bound to get a few disapproving looks from holiday purists but hell, the sweater is in the traditional colors of green and red, so tell them to calm their balls and enjoy their final days before the Dark Ones slither out from a crack in the earth and devour them all.
Then pass them some eggnog.

Bow-ties are huge right now and if you have been jonesing to get on the action but can’t find something nerdy enough to latch onto may I recommend the Joker bow-tie?
It’s made from an actual comic book and, best of all; it’s a pin-on so you get to incorporate TWO dorky looks at once.
I mean, it’s not like you are super fashionable anyway so this just maybe the look you are after.
I know I would sleep with you. 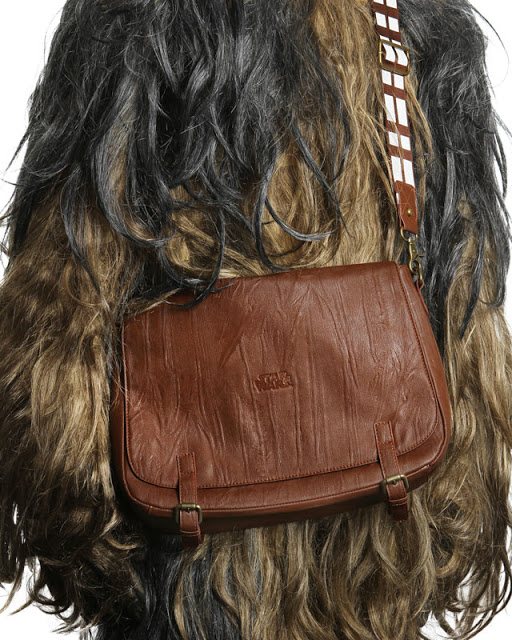 This former Comic-Con exclusive is now available for those of us who were too broke to afford the trip to San Diego but who desperately wanted the swag (Yay!)

It comes with a Chewbacca-style bandolier strap, a faux leather pouch and enough room to shove an 11” netbook into it.
On a personal note: It’s also good for those nights out on the town when you need to have access to condoms, breath mints, fresh undies and hand-cuffs without having to carry around a bulky backpack or extra-large purse.
The Incredible Hulk Classic Blue Circle T-Shirt 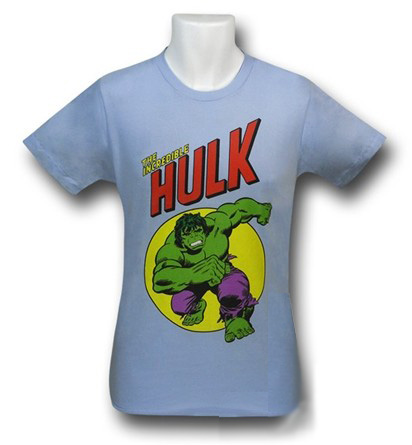 There are about a million different Hulk t-shirts out on the market but this particular one reminds me of the days when I would have to hide from an 8th grader named Jamie during lunch because he thought it would be hilarious to try and rip my awesome comic t-shirt off my body in order to see if my boobs were really as big as he thought they were.
Needless to say, I protected said t-shirt by hiding in the handicap stall until the pass bell would ring, thus racking up the tardy slips and ending up in detention.
So yeah, a light blue retro hulk tee would be a nice little reminder of those times that I lived in fear, but had excellent fashion sense…and a really awesome rack. 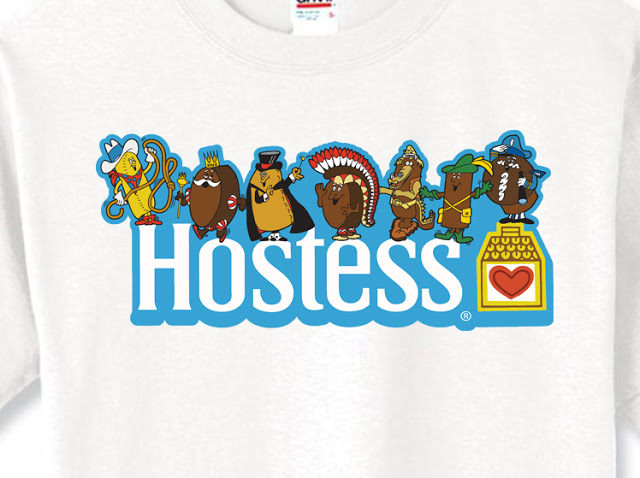 It could be an end of a snack food era and judging by how quickly the shelves at my local grocery store cleared out after the public learned of Hostess’ demise; people really want their damn Twinkies.

So even if America’s favorite chemically created snack cakes are saved by some faceless corporation in the end, it’s never going to be the same taste ever again. So celebrate the original Ding Dong, Suzi Q, Cupcake and yes, Twinkie the Kid, with a vintage style tee that will make your mouth water in nostalgia.
It’ll make you feel better.
Touchscreen Gloves 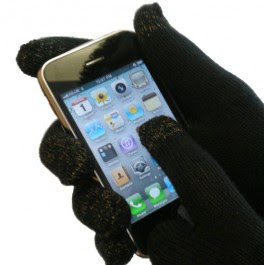 When it’s freezing outside but you desperately need to use your smart phone RIGHT NOW what the hell are you supposed to do?
Well luckily for you, you now have the ability to keep your hands toasty warm while passive-aggressively baiting your “friends” with bizarre status updates while wearing a pair of Smart Gloves.
That’s right, you can keep posting things like “…really sad today” all swaddled in washable comfort while waiting impatiently for people to ask you why you are sad.
Technology has really come a long way hasn’t it?
Jack Kirby The Demon T-Shirt 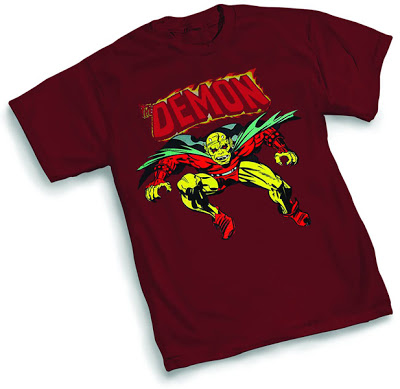 Etrigan the Demon might be a part of the DC “New 52” re-launch, but I will always enjoy the Jack Kirby version from back in the 70s (it’s nostalgia, baby).
For those of you unfamiliar with The Demon, he was a badass hell spawn who had to spend his life kinda doing good because he was bonded to a decent dude named Jason Blood (which, by the way is the coolest name ever) who wanted to use Etrigan’s powers to help out others…blah, blah, blah, needless to say The Demon was conflicted about this.
And yes, I do prefer the vintage version of Etrigan with the yellow skin rather than the newer version, where he appears more Lobo-ish, simply because I’m old and I like things the way they were dammit!
Hence, this t-shirt.
So show some love and slip on this tee…and then change your name to Jason Blood because that shit is fierce.