Babies come out of the womb completely empty in the head and, as a parent; it is your responsibility to fill up that noggin with stuff that is important to its well-being…like Star Trek stuff.
So get that DNA replicate of yours started as soon as possible on all things Trek by covering its body with a light up Star Trek bib and shoving food into its maw with an Enterprise spoon so it learns just how important Kirk, Picard, Sisko and Archer were in pop culture history (and yes, I’m leaving out any mention of Voyager, as should you).
And besides, shouldn’t the first words out of Junior’s mouth be “Make it so”?
Luggo Robot Rolling Case 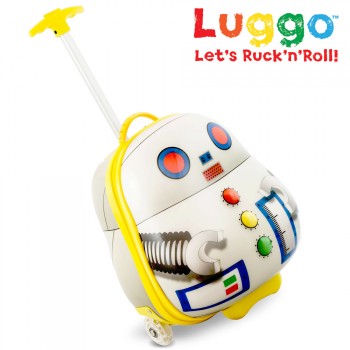 Robots are scary, but baby robots are freaking adorable and seeing how this particular rolling robot has enough room inside it for stuff like junk food, comic books, and stuffed animals, it is well worth allowing it into your home for your children to enjoy, even though your first instinct would be to kill it with fire.
Still not convinced that allowing a robot to spend time with your family would be a good thing?
The Luggo rolling robot can also be worn as a backpack, which will come in handy when our robot overlords decide to destroy the earth and begin executing humans…once they spot you or your children giving a piggy-back ride to a baby robot, they might decide to spare your life and keep you as a pet.
A fine investment I would say. 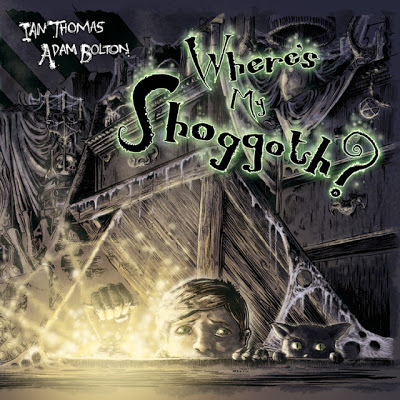 Introduce your children to the Cthulhu mythos with this beautifully illustrated picture book (by Ian Thomas and Adam Bolton) that tells the tale of a young boy who wants to take his Shoggoth out for a walk, only to find out that it’s missing.
What transpires is a very sweet adventure through a mansion and its grounds, filled with various creatures and demi-gods, all to find his friend.
And while some parents might be a bit freaked to give their child a picture book with subject matter a little more hardcore than say, Are You My Mother?  Just remember, it’s a perfect introduction to the Old Ones to whom your future teen Goth will be praying to out of spite. 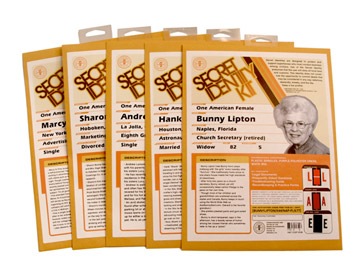 Kids love to pretend to be someone else so why not indulge their delusion by giving them various identities to practice with this holiday (it’ll come in handy when they grow up to be a con artist).
Each kit comes with a registration form, a troubleshoot guide, FAQs, and signature practicing sheet (plus some extras) and only cost $7.99 a piece (which means you can afford to invest in more than one identity!).
Let the lies and deceit begin! 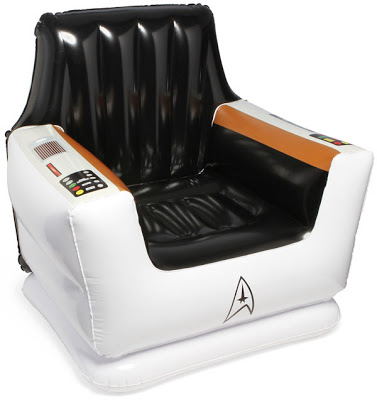 My desire to breed is normally ‘nil, but since spying this awesome inflatable kids version of the Star Trek Captain’s chair, I’ve been reconsidering. I mean, how cute would it be to dress up my offspring in a little Trek onesie and set them up in this blow-up chair while forcing them to watch STNG against its will?
Frakking cute I’d say.
Let the procreation begin! 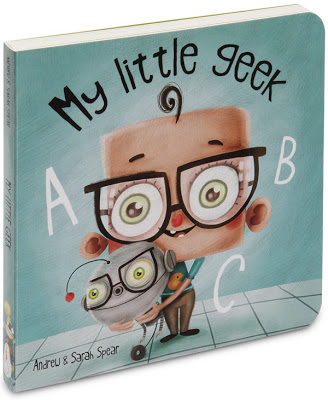 Forget about traditional board books that attempt to limit the vocabulary of toddlers to things like B is for Ball…totally boring. What you want to get for a young ‘un starting out in the world is an ABC book that teaches “REAL” words like Z is for Zombie or J is for Joystick- you know, words that they will actually need to know.
I mean, how helpful is it going to be if your child starts mumbling A is for Apple when some malfunctioning android is skulking up behind you (the book covers Android, thank god).

Who cares about a damn apple…I NEED TO KNOW IF ASH FROM ALIEN IS GOING TO KILL ME. 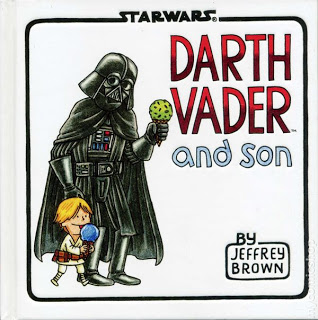 Comic artist and writer Jeffrey Brown has managed to create an alternate Star Wars universe that will satisfy all hardcore fans of the original trilogy while still appealing to young kids who may not understand why their parents are bat shit insane over it.

Beautifully done and super-sweet, I cannot stress how amazing this little book is for people of all ages. 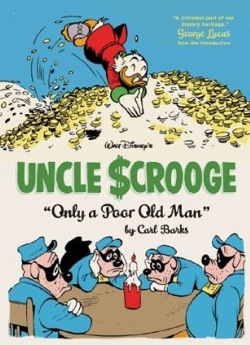 Comic books have always been an excellent gateway into reading, and when it comes to smart, imaginative and engaging, you don’t have to go much further than Carl Barks.  Barks known as “The Good Duck Artist,” wrote and illustrated Donald Duck and Uncle Scrooge comics from the forties through the sixties and remain some of the best comics ever produced.  Now, Fantagraphics is reissuing Barks’ work in a series of must own hardcover volumes.

What better way to introduce your own Huey, Dewey or Louie to comics? 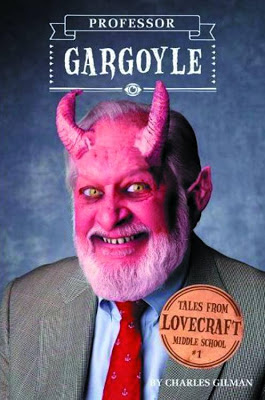 Middle School is a horrible time in every person’s life, but in this book, the horrors deal not with being bullied by your peers, but realizing that your new state-of-the-art school just might be a portal to a different world. Add to that  a two-headed rat,  a secret attic above the library that no one seems to know anything about, and a teacher that may or may not be a monster, and you have the makings of a coming-of-age story that dives deep into RL Stine territory…in a good way.

Perfect for any kid who has no interest in sparkly vampires or moody werewolves. 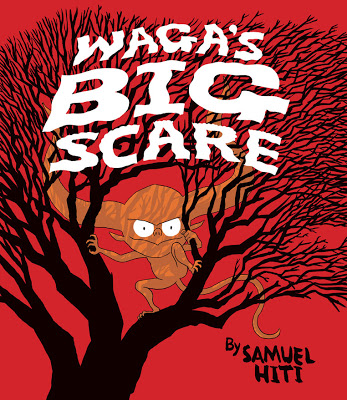 When I was a little girl I was never interested in dolls or playing house, instead I played games like Ghost (put a sheet on your head and scare your little brother) or Knife Butcher (same concept only chasing him down with a plastic butter knife). So a story about a monster named Waga who lost his scare and is trying to get it back would be high on my reading list back then (of course, I was kinda weird and, according to my mother, most likely possessed, so keep that in mind if you happen to be looking for a kid’s book about a scary monster).

Now, don’t let the subject matter fool you. This is a story of perseverance and being true to yourself, which are two very important attributes that all children should learn about at a young age. And, seeing that the main character is a monster, it will more than likely keep the kindergarten-3rd grade reading group engaged in the moral of the story rather than boring them to death like those stupid Serendipity books I was given back in the day.

I’m all about educating young people. 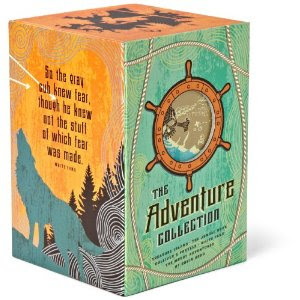 Children need to read as much literature as possible in order to undo all the damage that “Must See TV” has done to them.  And starting with a collection of classic adventure stories should begin to help them refocus their brain and appreciate the “internal TV” that occurs when one reads a great book.

Now, I know that handing a tween a book that doesn’t have One Direction on the cover can be a challenge, so might I suggest telling them that their favorite band member reminds you of some of the lead characters in the books (this might help them get into it) and reading the stories with them.

And, if that doesn’t work, tell them that these are required reading in high school so they might as well start reading them now. 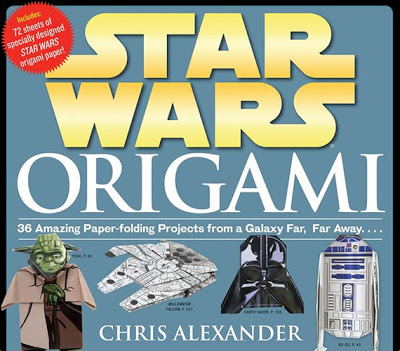 Winter is coming (and I’m not talking about The Game of Thrones) which means that the kiddos are going to be stuck inside all day…with you, which means that you should probably engage them in something other than all-day video game marathons before their brains atrophy from a lack of use.

And wouldn’t you know it, someone (author Chris Alexander) has married your love of Star Wars with an activity that will keep your kids occupied for hours.

The Star Wars Origami book comes not only with instructions on how to fold and make 36 different characters and ships, it also comes with special Star Wars paper that, when folded correctly, will make said constructions look exactly like they should (although, for practice purposes I would have the little shavers start out with regular paper first).

I tell you, once those little bastards get a taste of folding paper into tangible things, they are going to want to do it every day…which is great since Winter lasts frakking forever. 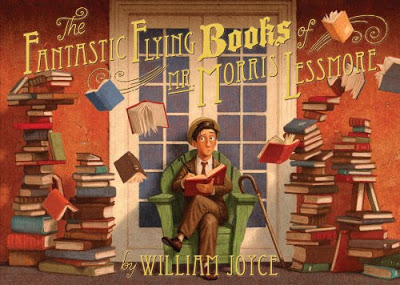 Writer/illustrator William Joyce is one of the most amazing artists in picture book literature and if you have any doubt as to why you should have a special shelf in your kid’s bedroom dedicated to him, then pick up a copy of The Fantastic Flying Books of Morris Lessmore (the inspiration for his Academy Award winning short film) and find out why.

This is a book about the magic of stories (regardless of the form, be they books, e-books or apps) and why it is important to surround yourself with them.