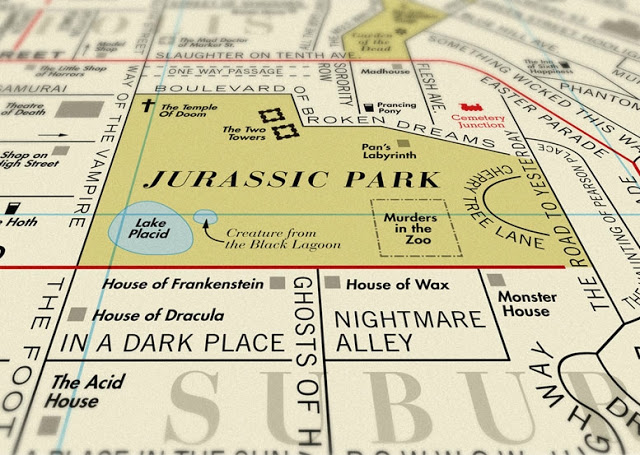 At first glance, this looks like a regular old street map,
but upon closer inspection you will notice that the map is not made up of your
typical highways, streets and parks but instead of film titles…over 900 of them
in fact.
Why there’s Jurassic Park
bordered by Arlington Road and, over
on the east side, Thunder Road turns
into Sunset Boulevard at the
crossroads of Wuthering Heights and Mean Streets.
And look! The Cloverfield
neighborhood has lake front property at the Reservoir Dogs…I’ve always wanted a cabin there.
A great gift for any film buff who has secretly harbored a
fantasy of living on Nightmare on Elm
Street. 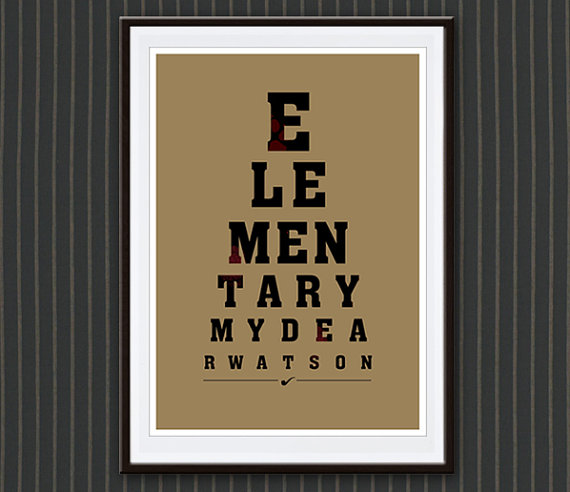 If you love you some Holmes, this exquisite print
celebrating Sherlock’s classic line from the flick, The Adventures of Sherlock Holmes will certainly add a bit of
mystery to your abode (not to mention it can be used as a fancy eye chart
during dinner parties to gage how drunk your guests are getting).
Simple, sweet and stylish.
Just like the good detective himself.

Fred Flintstone is one bad Motherfu….(shut your mouth)…I’m
just talking about Fred, sheesh.
In this wonderful homage by Josh Latta to Robert Kirkman’s zombirific
tale of a group of survivors battling the undead and each other, Fred and
Barney take on a group of their own decaying fossils in a heroic fashion, which
may or may not end with them getting ripped apart.
I’m pretty sure the Great Gazoo had something to do with
this… 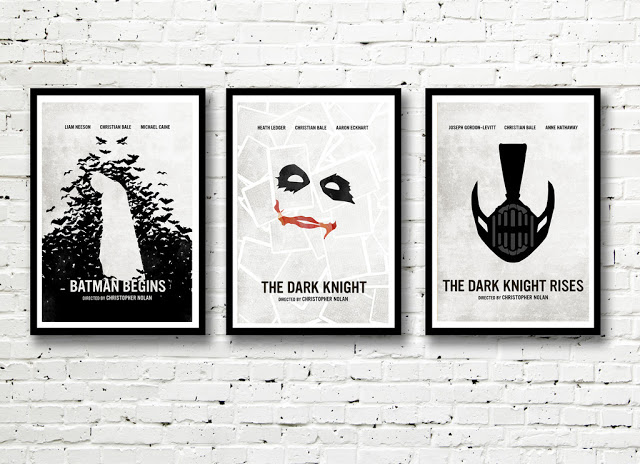 So, Nolan’s Batman
trilogy is over and now you have nothing to live for.
Can I, perhaps, help you make it through another day by
showing you a collection of minimalist Batman
prints that you can hang in your home?
See how each print contains the one iconic image associated
with a particular film within the trilogy and how that image is delightfully
rendered in black and white (and one with a little splash of red) to make it
even more powerful.
Batman doesn’t have to be over my friend…It can always live
within you…and on your walls. 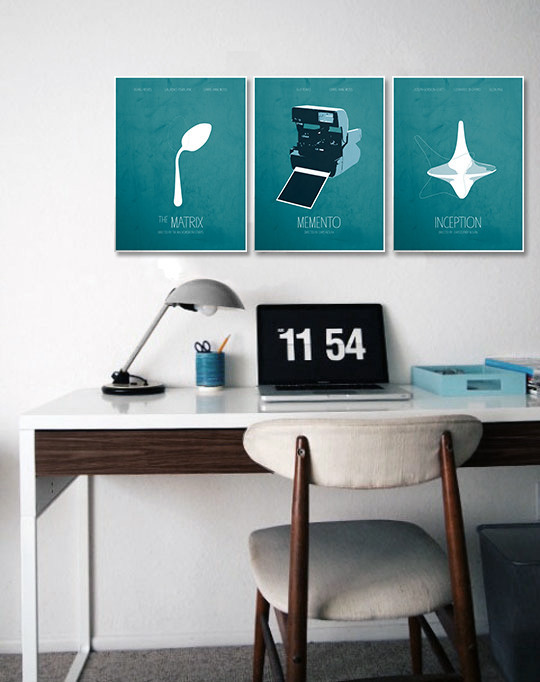 Deep, philosophical questions can  plague the mind with a level of complexity
that has been known to…..oh, who the hell cares about that when you can own a
collection of awesome mind-fraking movie prints from The Matrix, Memento and
Inception all done in a beautifully minimalist style.
I mean, if you want to get all deep and meaningful we can
talk about why you never seem to pick up the check when we go out to eat or how
I always seem to be the only one who has to make decisions in this relationship…no?
You want to talk about the ending to Inception again?
Good call. 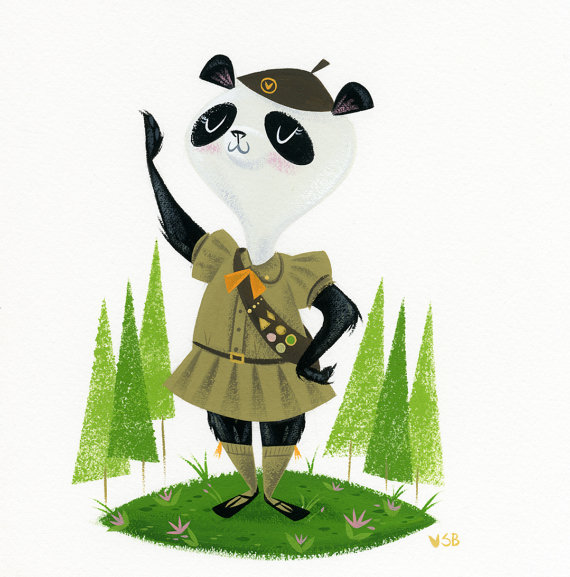 I’m always on the lookout for kid-friendly art work for
friends and family members who have birthed themselves some young ‘uns that isn’t
sickly sweet or downright horrific.
And this super-awesome Panda Girl Scout print from Stephanie Buscema fits that to a
tee.
Vintage-styled in muted colors and adorable enough to be
kept hung on the wall for years to come, this delightful ode to chick-power
(girl scouts taught me a thing or two about feminism) will be a definite
keepsake for any lucky tyke who gets it.
Come to think of it, I kinda want it. 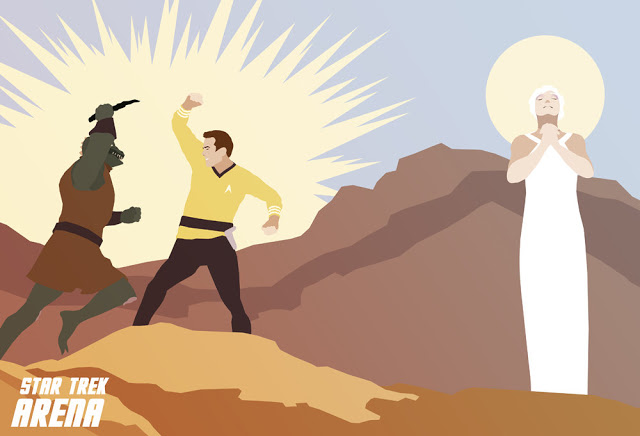 In season one (episode 18), Captain James T. Kirk battles the
Lizard King Gorn (okay, it was a really a pissed off reptile captain who was
ticked that Kirk brought a bunch of crazy savage hostility to his solar system)
but it was the show that I remember the most from the Original Star Trek and the one where Shatner made
a freaking cannon out of bamboo and diamonds (the cannon was later debunked on Mythbusters…am I getting too nerdy for
you?).
Anyway, this supremely geeky print pays tribute to that
fierce battle and is done in a classic style that will look mighty fine on your
wall (without it making you look like too huge of a dork).
Although, having Star Trek
art work does kinda scream HUGE NERD…oh well, it’s still pretty damn cool.
Darth Vader “He’s Got a New Lightsaber” Art Print 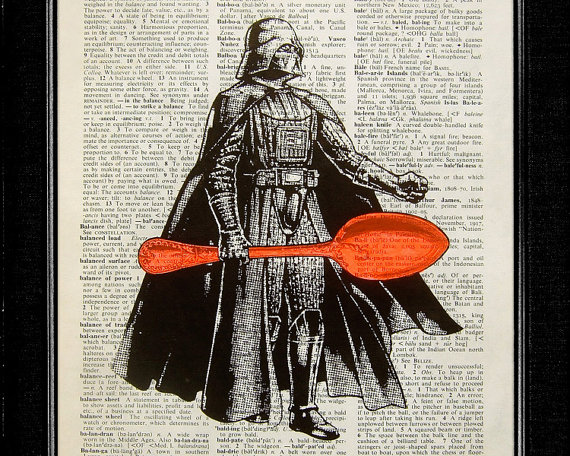 You know, I’m not going to get super deep about this
particular print because art, like Star
Wars, is something that has to affect you on a visceral level. And for some
reason a hand-printed Darth Vader carrying a big red spoon on a vintage dictionary
page just does it for me.
It probably means that I have some kind of mental disorder
or something but hell, I dig it.
And, if you find it oddly soothing like I do, then perhaps I’ll
see you in the common room at the mental hospital soon. 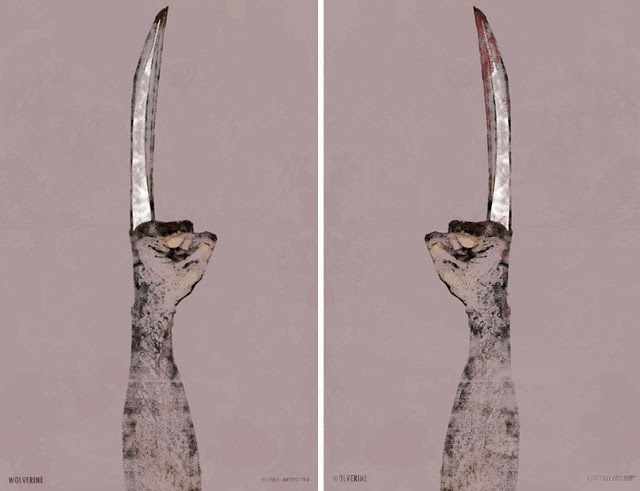 When you think of Wolverine, you think of “claws” so why not
get a beautifully illustrated set of them to hang on your wall at home.
Personally, I would choose to bookend these prints between a
shelf holding various “Wolverine” figures, comics and movies just to make the
point that he’s simply the best damn thing to ever come out of the comic
universe.
But that might be destroying the artistic integrity of their
quiet simplicity, so perhaps just hang them up and leave them alone. 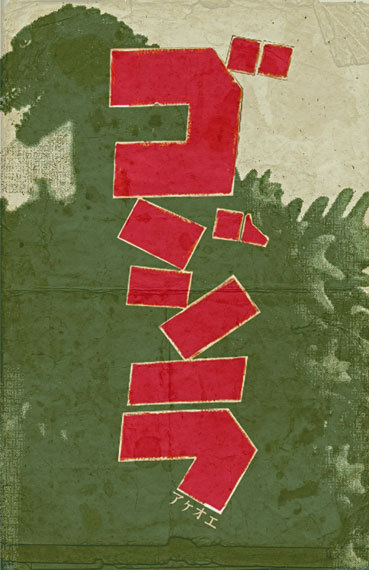 Oh Godzilla, why so angry all the time?
You just stamp, stomp and smoosh all those innocent Japanese
civilians without any thought at all.
Do you need a big hug?
It’s gonna be okay, I promise.
(Actual dialog said to my nephew when he was pretending to
be Godzilla once…has nothing to do with this really snazzy Godzilla silhouette poster
but I thought it was a lovely tribute to the internal life of a cranky lizard…by
the way, this is probably my favorite Godzilla print ever.)
Bill Murray “Winger” Portrait 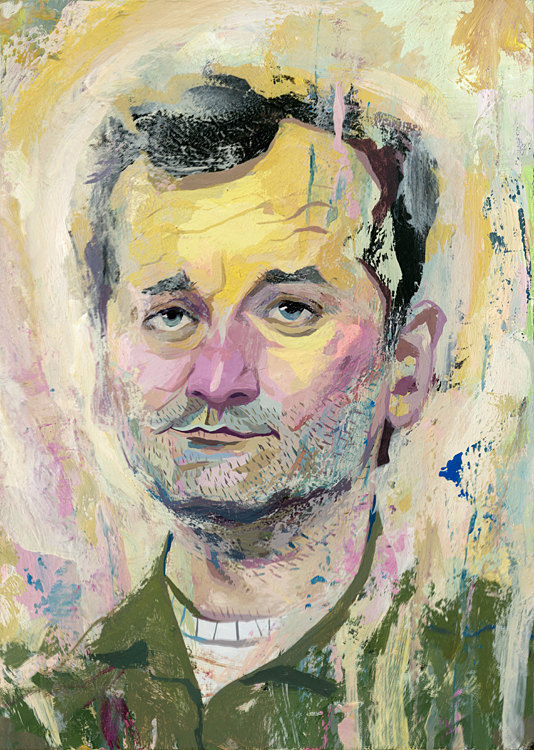 Bill Murray is a God and therefore should have his likeness
placed upon a wall where candles are lit in his honor every Friday evening at
sundown (like Sabbath).
Then you could have a big dinner with a lot of sweet wine
followed by an evening of watching Bill Murray movies.  This painting by Rich Pellegrino would hang just above the television.
Now that’s a religion I could get behind. 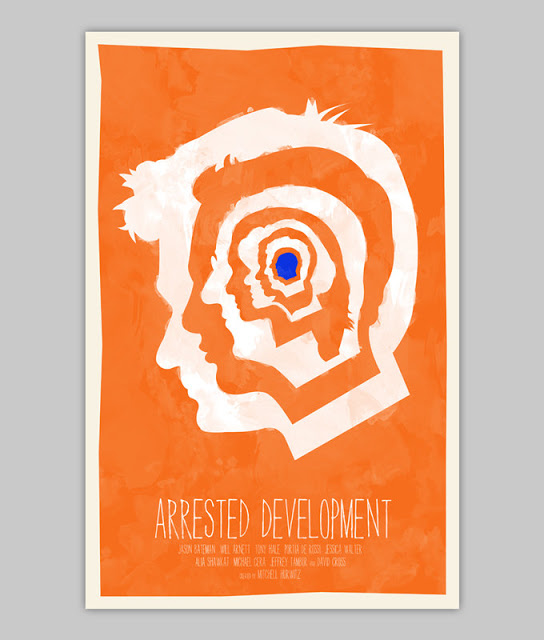 Celebrate the rebirth of a television classic with this “There’s
a Little Tobias in All of Us” Silhouette poster featuring the entire cast of Arrested Development (it’ll take you a
minute to see them all).
Beautifully designed and perfect for anyone who dumped a
load in their pants after hearing that they were making new episodes…which
includes me.
John Waters Portrait 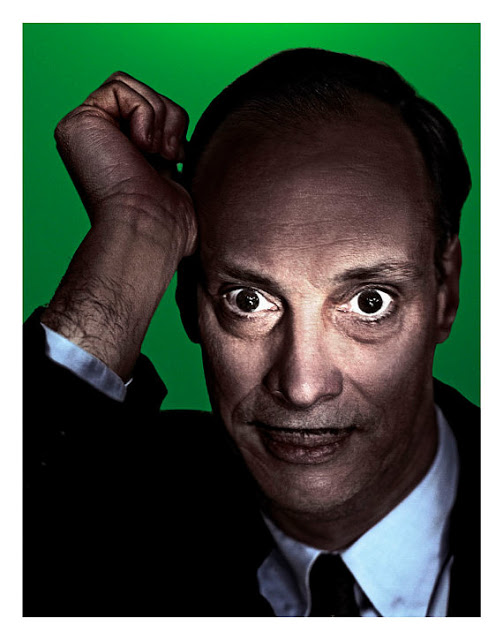 John Waters has
managed to create a career out of pushing boundaries through both his cinematic
and artistic work for close to 40 years, and for that I adore him.
Which is why this sublimely elegant portrait of the Master
of Filth by photographer Seth Kushner is worth owning if you happen to be in love with the man (who was once
quoted as saying of his eclectic tastes “…I love Bergman and I Dismember
Momma”) and his outstanding
dedication to making sickeningly fun films.
Limited to just 20,
this is a real must have for any true fan. 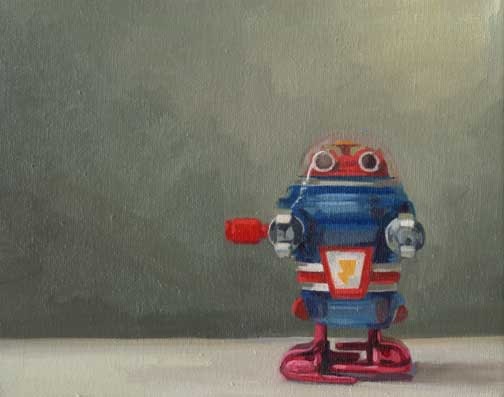 Looking for an
original art piece that best represents a classic sense of nerdiness?
Then look no
further than Sandy MacDonald’s hauntingly stark Lone Robot oil painting that
marries the iconic childhood toy with a desperate feeling of isolation (kind of
like adulthood).
Reminds one of both
eating in a bathroom stall in Junior High in order to avoid a beating and how
your former significant other forced you to give up all your neato toys for the
sake of being a responsible adult…or maybe, that’s just my life…whatever. 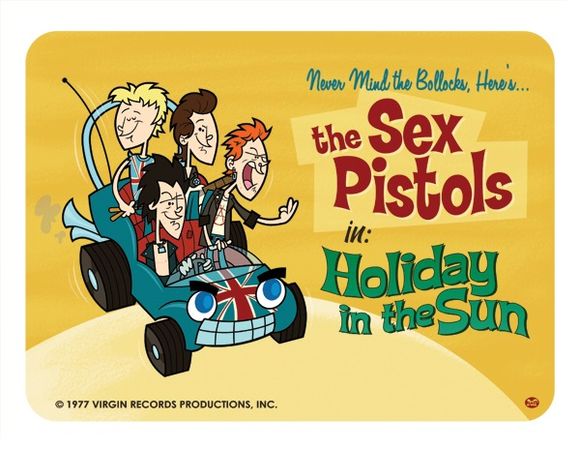 If the Sex Pistols
had a Saturday morning cartoon back in the 70s would I have grown-up any
different? This is one of those questions that will keep you at night.
The other question
is: “How many of these prints can I buy before my credit goes bad?”
Luckily, they only
cost $10 so I have a ways to go before I need to start worrying.

The Six Million Dollar Man and Bigfoot Action Figures Ah, the Seventies…when a television show could have an episode about a robot-parts super dude...