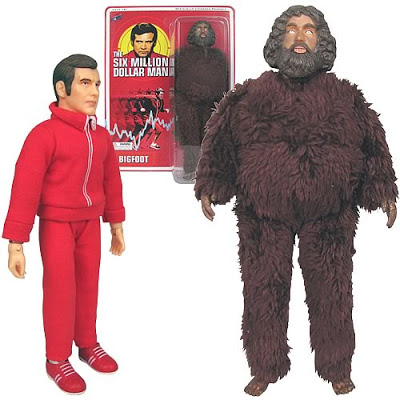 Ah, the Seventies…when a television show could have an
episode about a robot-parts super dude fighting Bigfoot on network TV and get
huge ratings…those were the days.
But why limit yourself to just memories when you can
re-enact all the awesome slo-mo fighting techniques of Steve Austin with this
amazing action figure set featuring Bigfoot in all his hairy glory.
It’s like the Gods of cheese TV smiled down upon you and
presented you with the greatest gift ever!
Let’s hope that next year some will release a Chuck
Norris/Grizzly Bear set so your life will be complete. 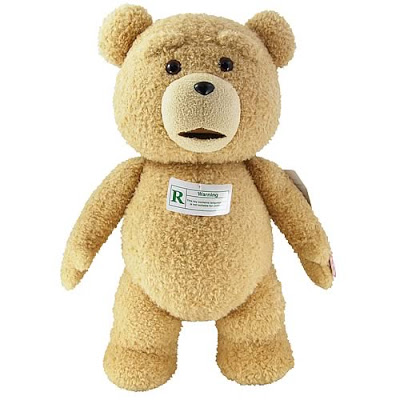 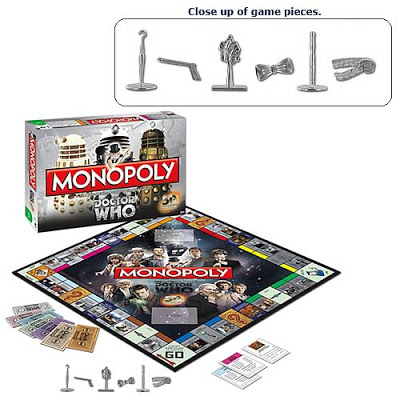 You gotta hand it to Monopoly, they essentially sell the
same game over and over again to nerds like me by releasing it in limited
edition Geek-centric sets so that we buy it like addicts (I should know, I have
various monopoly games featuring Star Wars, Mario Bros, Futurama and The
Simpsons).
And this version is no different.  The 50th Anniversary Doctor Who
set features all 11 doctors,  spans the
entire Who universe (including 22 iconic episodes) and includes 6 games pieces
that are likely to start a fight between Who fans (Dammit, I want to be the
frakking bow-tie bitch!).
Well worth it if you are unable to resist the temptation to
buy stuff with Doctor Who on it.
Pac-Man Plug N’Play 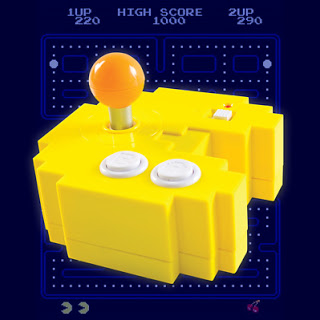 There are times in everyone’s life when they have to call
into work and play some Pac-Man, and thanks to this sweet little plug n’ play
shaped like the iconic yellow muncher, you can.
Just plug it straight into your set (with the included AV
cables) and get ready to play all the Pac-Man your little heart desires.
Sweeter still, the pre-programmed game console comes with
Dig Dug and Galaga (as well as multiple Pac-Man versions and other games) so that
you can re-live your youth to the fullest.
Just remember, you’re going to have to go back to work
sometime so make your game play count. 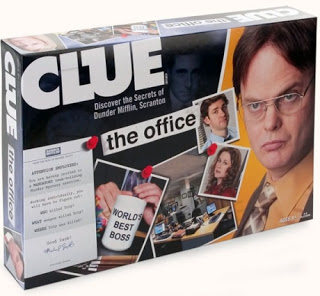 Oh my God! Toby’s Dead!
Someone at Dunder Mifflin killed Toby and it’s up to the
employees to figure out who killed him, with what and where (I’m guessing
Dwight did it with the “World’s Best Boss” coffee mug in the Break Room) in
this bizarre and hilarious version of Clue.
And yes, I know that the show has lost some of its pizazz
since Michael’s departure, but this game harkens back to its heyday and
features weapons and situations straight out of the first 7 seasons.
If you love(d) The
Office, you’re gonna enjoy the game…besides, Toby’s dead and I’m sure that
makes Michael awfully happy. 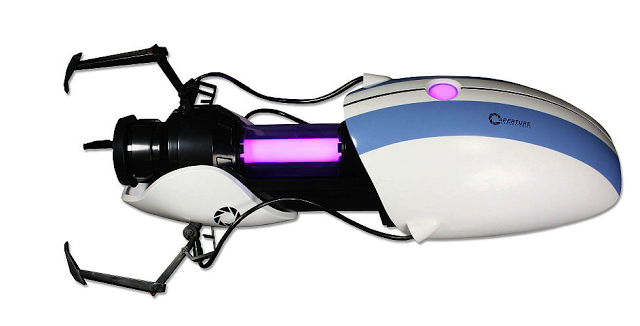 I love Portal and Portal 2 with a depth of passion that I
usually reserve for beer, so you’ll have to excuse me if I get a little weepy
over the fact that I can own my very own Portal device replica.
The only thing that would make this even more amazing is if
it actually worked… (sigh)…although, it does include various game sound effects
to make it “almost” real so I guess that’ll do.
I can’t think of any gift that would satisfy my or any other
fan’s soul more than this “toy” right here.
YOU HEAR THAT MOM?
Limited to just 5000.
Pong Re-Stick WallGraphics 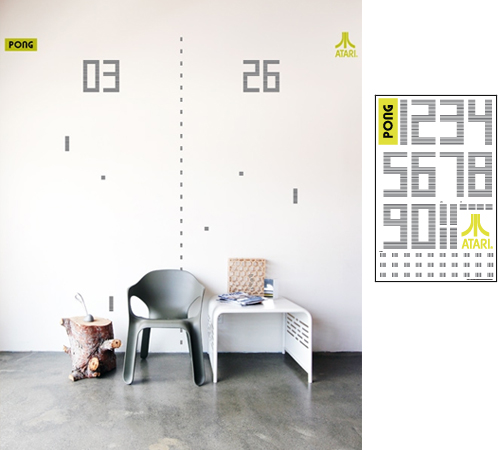 If you are dreaming of the day when you can turn your extra
room into the ultimate gamer’s fantasy but don’t have the cash necessary for a
complete overhaul, try slapping up a Pong wall decal for now and see how
awesome the room looks.
These sweet-ass re-stick ‘em graphics are large enough to
make a big visual impact on any room (and since they aren’t permanent, they’re
perfect for rentals) without making the room seem obnoxious and loud (which can
happen if you simply hang up game posters).
So go ahead and put together your game room.
People will think you’re pretty stylin’. 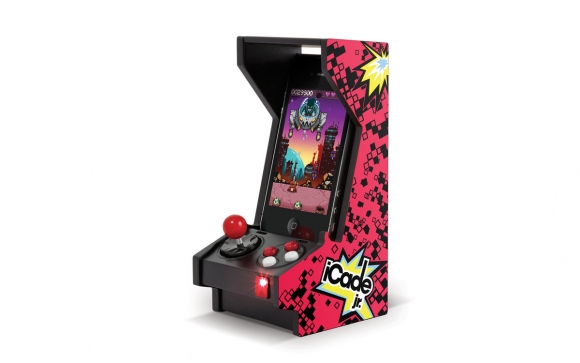 I know that there’s a bunch of Arcade docking stations that
are out and about, but the iCade Junior is special, it only fits the iPhone or
iTouch (unlike the others which are made for the iPad) so it is very
reminiscent of those desktop arcade games from the early-to-mid 80s that were miniaturized
versions of Pac-Man, Donkey Kong, et cetera.
And, if you are old enough to remember how awesome those
little mini arcade games were, then you’ll understand why someone my age would
covet this sweet piece of technology.
So grab this sucker and download the Atari Greatest Hits app
and start wasting hours…just like you did at the local pizza joint back when
acid-wash jeans were cool. 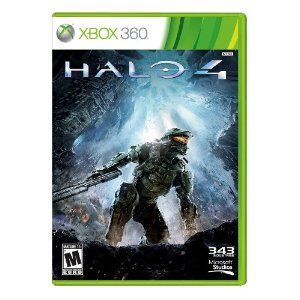 Master Chief returns to do battle with an ancient evil and
confront his destiny…by far the most exciting of all the Halo games and sets
the stage for a new era of Halo storytelling…which will probably time-suck your life away for about a month.
Assassin’s Creed 3 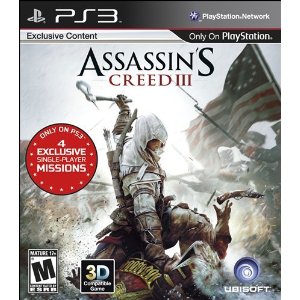 Go back in time to America circa 1775 and experience the
epic battle for our freedom at the battlefields of Concord and Lexington, the
cities of Boston and New York or the snowy landscape of the Appalachian
wilderness.
Makes you wish that your 10th grade American
History class was this engaging.
Wii U

If you didn’t grab up the Wii U on launch day, you should
probably start hoping that it will end up in a pile of gifts with your name on
it because this is one amazing system.
And yes, the hand-held tablet is large but to be honest with
you, it’s not unwieldy once you get the hang of it and, when playing with
others, it gives you a new perspective on the game play that the others (with
the wii remotes) do not have access to, making the experience more intense.
And with the plethora of games released for it (Zombie U,
New Super Mario Bros, Batman: Arkham City, Armored Edition, Nintendoland, etc.)
you are going to have plenty of ways to enjoy it.
FYI: One of the best reasons to buy the console is that you
can play certain games even when someone else is using the TV.  As long as the system is on and the game is
in, you can play it on the handheld tablet just like a giant DS.
No more sharing!
Sweet.
In this article:2012 Holiday Gift Guide