Last week, Brown University Library hosted a panel discussion that featured several of America’s most successful and renowned thriller writers.  Moderated by author Jon Land, the discussion between David Baldacci, Steve Berry, Nelson DeMille, Lisa Gardner, and R.L. Stine covered a gamut of topics including their personal definition of the genre, favorite books and the current state of the publishing industry.

Land, who is also the driving force behind Brown’s new Thriller archive, the first of it’s kind in the world, spoke to FOG! on the eve of the release of his thirty-second novel, Pandora’s Temple, which hits stores today.

You’re responsible for initiating a Thriller archive at Brown University.  What was the genesis of the project and why do you feel that such an archive is important?

My writer’s organization, International Thriller Writers, was founded in large part to forge a distinct identify for the Thriller genre apart from mysteries.  For much too long the two were mixed together, even though there are distinct differences in structure, theme, character and approach.  So the great thing about establishing the first ever dedicated Thriller Collection at Brown University’s esteemed John Hay Library is that it will help build respect for the genre and further establish its credibility and relevance in literature as well as pop culture.

The thriller genre often crosses over to mystery and horror.  How would you define a thriller?

Wow, that’s a great question! Generally, I’d define a thriller as any book you can’t book down.  But more specifically I’d define a thriller as a quest story where a hero is racing to stop something big and terrible from happening at the risk of his or her own life.  And you’re 100% correct in raising the issue of crossover.  Stephen King’s brilliant Firestarter may be shelved in the horror section, but at its heart is the perfect thriller.  Lee Child was president of Mystery Writers of America and now serves as president of ITW.  Venturing into film I call classic action films like Predator, Aliens, and Robocop “sci-fi thrillers.”  And by that I’m referring to pace and structure more than anything else.

You are Vice-President of Marketing for the International Thriller Writers.  How is the organization connected to the archive and what does it currently house?

We’re just getting started, so right now it houses my manuscripts, along with those of John Buchan, author of The 39 Steps which many feel is actually the first thriller.  But Steve Berry will be donating his papers and Sandra Brown will be donating a hefty portion of hers as well.  Additionally, International Thriller Writers will be contributing its founding documents, correspondence and collected papers encompassing the organization’s history.  ITW will also be helping with the selection and recruitment of additional authors to contribute to the Archive.

What writers currently inspire you?

Stephen King for his longevity and ability to suck you into the story better than anyone else I’ve ever read.  James Lee Burke for his dark, deconstructed world and lyrical brilliance as a writer.  Lee Child for creating the greatest post-modern series hero in Jack Reacher.  Michael Connolly for his pacing.  Don Winslow because of his risk-taking and blistering originality.  Steve Berry and James Rollins for their plotting.  I could go on forever, but that gives you an idea!

When writing a thriller, what generally is your focus; plot, character or narrative twists?

Not to cop out, but all of the above!  They’re very interconnected in the thriller form and you can’t have one without all—well, I guess you could, but it wouldn’t make for a really good book.  I echo the great John D. McDonald who said that story is stuff happening to people you care about.  If you don’t have a vested interest in the characters, if you don’t root for the hero, than all that happens is meaningless.  By the same token, though, you need a great plot that does those characters justice.  As for narrative twists, since I don’t outline lots of times they come as much of a surprise to me as they do to the reader.  Hey, after all, if I don’t know what’s going to happen next, how can anybody else?

Tomorrow, your thirty second book, Pandora’s Temple, is being released.  What’s it about?

To begin with, it brings back my original series hero Blaine McCracken after a 15-year absence from the page and poses the question, What if Pandora’s box was real?  That’s the dilemma facing McCracken as he races to stop two divergent evil forces from getting their hands on dark matter, the ultimate force in the universe that also has the potential to destroy the Earth.  The book’s origins actually lie with me “trying out” to become one of Clive Cussler’s co-authors.  I wrote an extended sample for Clive to make my case and when the fit just wasn’t right, I was left with a story that, with only minor modifications, was perfect for Blaine McCracken.  Of course, I hadn’t written him in fifteen years, which posed its own challenges I was able to swiftly overcome.  And the result is probably his biggest adventure ever.  Writing this book was like reconnecting with an old friend you haven’t seen in much too long.  But rest assured that McCracken’s next appearance will follow with a much shorter lag time! 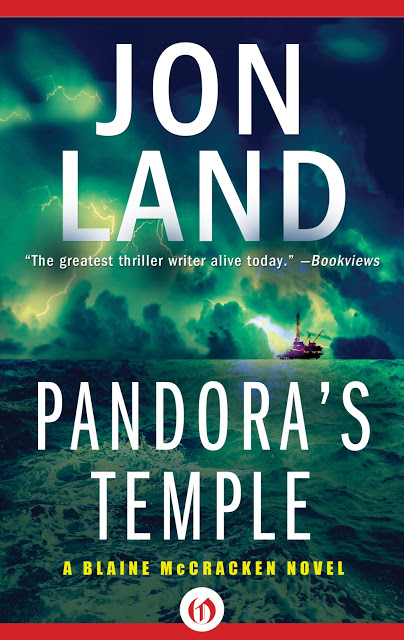 “Jon Land’s dazzling new novel, Pandora’s Temple, carries the reader on a wild tsunami of a tale through a world of assassins, doomsday cults, and killer robots, all focused on an ancient and terrifying mystery hidden at the bottom of the Mediterranean Sea. The story is fascinating and utterly original, with vivid characters and a compelling, high-technology backdrop. I loved this book!”
–Douglas Preston, co-author of the #1 New York Times bestselling Pendergast novels
“Jon Land’s imagination is a wonder to behold.  He’s a seasoned veteran whose characters seem like old friends, and Blaine McCracken — a man with grit and determination — is just that.  Welcome back, Blaine.  We’ve missed you.  Hopefully, this will be start of many more new adventures for this robust hero.  But Land has started off with a winner.  This one should be mandatory reading for all thriller aficionados.”
–-Steve Berry, New York Times bestselling author of The Columbus Affair
“Land weaves a tale with threads of espionage, bio-technics, a doomsday cult, and Greek mythology with a plot-line rich in relationships and twists that will keep you guessing who to trust until the very end.  I know I speak for many when I say, ‘Welcome back, McCracken and thank you, Jon Land.’  One of the best thrillers of the year!”
–Suspense Magazine
“Land began writing techno-thrillers before Tom Clancy put them in vogue, and his strong prose, easy characterization, and commitment to technical accuracy have made him a pillar of the genre. . . .  After a fifteen-year hiatus, Mr. Land’s take-no-nonsense hero, Blaine McCracken, is back. While Mr. Land has been busy on other books, there has always been a call from fans of the McCracken series to see their champion brought back to the action. Well, they got their wish in this bold, bigger-that-life adventure called Pandora’s Temple.  Superbly created multidimensional characters mixing with thrills and spills of a world on the brink, and a modern-day larger-than-life hero to cheer for, Pandora’s Temple is a tour de force of adventure-telling power from a master storyteller.”
–New York Journal of Books
“I’m not sure if I’ve ever read a book with so many twists and turns and classic action sequences. . . .  As close to a perfect thriller as you will eve read, immensely satisfying in pace as well as scale, as Jon Land proves beyond any doubt that he is one of the greatest authors of our time and the best action writer in the world today. . . .  A relentlessly entertaining tale that’s everything a thriller is supposed to be.”
–Bestsellersworld
“Jon Land has brought back one of his readers’ favorite characters from his first-ever series and given Blaine McCracken an exhilarating, action-filled thriller that is thoroughly entertaining first page to last. The break-neck speed of the narrative, the exemplary development of the plotline and the complex interaction among the characters makes Pandora’s Temple, a must-read for the action-adventure enthusiast.”
–FreshFiction

“Pandora’s Temple is a story big and bold, and Jon Land is just the guy to write it. He aims high and hits the mark dead center. Full of surprises and laced with action and intelligence, this novel is an exhilarating ride start to finish.”
—John Lutz, bestselling author of Pulse