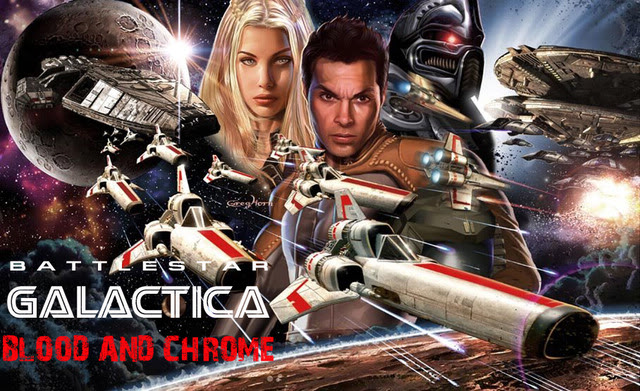 This highly anticipated chapter in the Battlestar Galactica saga takes place in the midst of the first Cylon war. As the battle between humans and their creation, the sentient robotic Cylons, rages across the 12 colonial worlds, gifted fighter pilot, William Adama (Luke Pasqualino, The Borgias), finds himself assigned to one of the most powerful battlestars in the Colonial fleet: the Galactica. Full of ambition and hungry for action, Adama quickly finds himself at odds with his co-pilot, the battle-weary officer Coker (Ben Cotton, Alcatraz). With only 47 days left in his tour of duty, Coker desires an end to battle as much as Adama craves its onset. Lili Bordán (Silent Witness) also stars.

Universal Cable Productions’ partner in the launch is Machinima, the next-generation video entertainment network for young males, and the number one entertainment network on YouTube. Each Blood & Chrome chapter will premiere exclusively on Machinima Prime (https://www.youtube.com/MachinimaPrime), Machinima’s premium channel, which has garnered over half a million subscribers in 3 months, and among other young male centric content, features original series in the sci-fi, drama, comedy, sports and animation genres.

“With its top-notch storytelling, pulse-pounding action, and cutting-edge visual effects, Blood & Chrome is the perfect extension of the Battlestar Galactica universe,” said Mark Stern, President, Original Content, Syfy and Co-Head, Original Content, Universal Cable Productions. “We are thrilled to see this hotly-anticipated event premiere on Machinima, an online network that is unparalleled in its delivery of high-class digital content to millions of viewers.”

Battlestar Galactica: Blood & Chrome will be presented as ten, 7-12 minute episode chapters available exclusively on Machinima Prime until February 2013, followed by its premiere as a 2-hour movie on Syfy (airdate TBA), and finishing with the release of an unrated version on Blu-ray, DVD, digital download, PPV and VOD. The series will remain on Machinima through April 2013.

About Machinima
Machinima is the dominant global video entertainment network for young males. The number one entertainment channel on YouTube, Machinima serves over 2.25 billion video views a month, and reaches over 210 million viewers monthly. Machinima’s global content network is the best place for gaming content. The network features official publisher content, gameplay videos, scripted series, and original content, including original weekly shows, all aimed at the coveted 18-34 year old male demographic. Machinima is fast-becoming a global phenomenon with an ability to capture a cultural sensibility and awareness among a next generation of entertainment consumers and marketers alike. The company is backed by MK Capital, and Redpoint Ventures, and is headquartered in Los Angeles, California.  For more information, please visit www.Machinima.com