EXPERIENCE AN ALL NEW CHAPTER IN THE “BATTLESTAR GALACTICA” SAGA 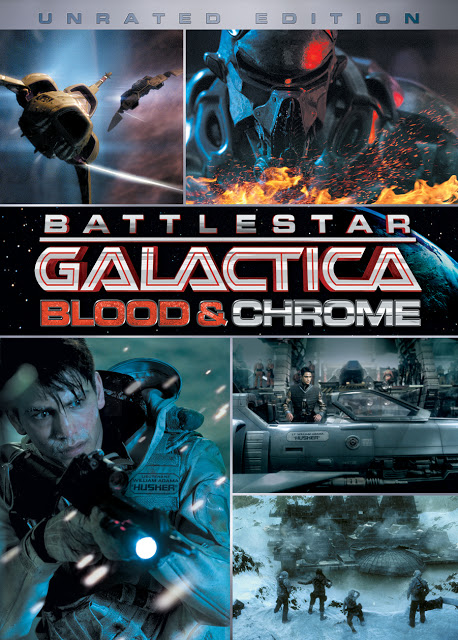 Fans will first be able to view Battlestar Galactica: Blood & Chrome when it premieres exclusively on Machinima’s premium channel, Machinima Prime (https://www.youtube.com/MachinimaPrime), beginning November 9, 2012. It will be presented as 10 episode chapters set to run through February 2013 and be followed by a two-hour movie premiere on Syfy. A special never-before-seen unrated version of this explosive broadcast event will then be available on Blu-ray™ Combo Pack, DVD and Digital Download.

An all-new chapter in the “Battlestar Galactica” saga, Blood & Chrome takes place in the midst of the first Cylon war. As the battle between humans and their creation, the sentient robotic Cylons, rages across the 12 colonial worlds, a young, talented fighter pilot, William Adama, finds himself assigned to one of the most powerful battlestars in the Colonial fleet: the Galactica. Though Adama quickly finds himself at odds with his co-pilot, the battle weary officer Coker (Ben Cotton, “Alcatraz”), the two men must set their differences aside when a routine escort mission with an enigmatic passenger (Lili Bordán, “Silent Witness”) turns dangerous and becomes a pivotal one for the desperate fleet.

The Blu-ray™ Combo Pack allows consumers to watch Battlestar Galactica: Blood & Chrome Unrated Edition anytime, anywhere on the platform of their choice. It includes a Blu-ray™ disc, a DVD, a Digital Copy, and UltraViolet™ for the ultimate, complete viewing experience.