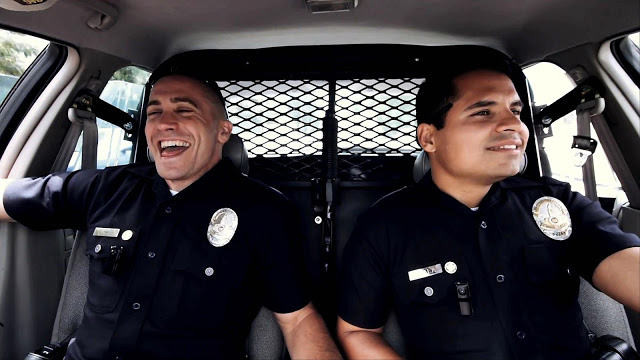 In their mission to abide by their oath to serve and
protect, Officers Brian Taylor (
Academy Award® nominee Jake Gyllenhaal) and Mike Zavala (Michael Peña) have
formed a powerful brotherhood to ensure they both go home at the end of
watch. But nothing can prepare them for the violent backlash that
happens after they pull over themembers of a notorious drug cartel for a
routine traffic stop. Seen from the point of view of the officers, gang
members, surveillance cameras, dash cams and citizens caught in the
line of fire, a 360° perspective creates a gritty, compassionate and
intense portrait of the city’s darkest streets, and the brave men and
women patrolling them.

A Heart-Pounding Cops-Eye-View of Life on The Streets of L.A. From the Writer of Training Day 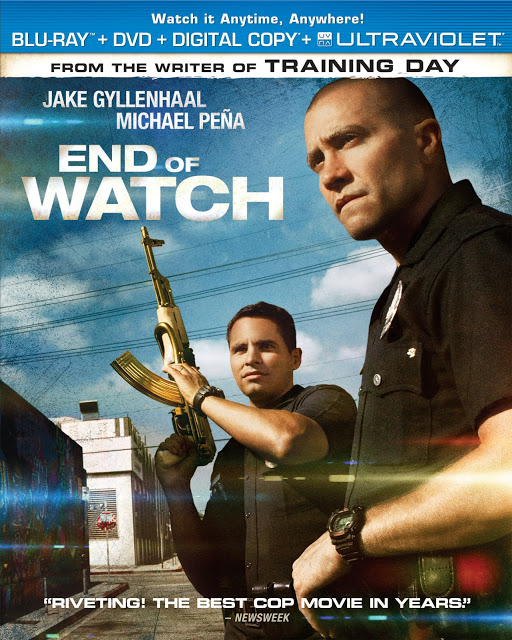 “One of the year’s best pictures! Exciting, emotional and, in a word, unforgettable.”
-Pete Hammond, BoxOffice Magazine

Jake Gyllenhaal and Michael Peña are a pair of LAPD officers patrolling one of the city’s most violent and gang-ridden areas in End of Watch, coming to Blu-ray™ Combo Pack, DVD and On Demand on January 22, 2013, from Universal Studios Home Entertainment. A gut-wrenching, first-person account of life on the streets from writer and director David Ayer (Training Day), End of Watch offers audiences a rare window into the world of law enforcement, packed with action, humor and emotion. With its incomparable high-definition picture and perfect hi-def 5.1 surround sound, the End of Watch Blu-ray™ immerses audiences in a dark and chaotic world, and includes an hour of exclusive bonus features including deleted scenes and director’s commentary.

Shot from the point of view of police officers, gang members, surveillance cameras, dashboard cams and citizens caught in the line of fire, End of Watch uses gritty handheld footage to create a powerful story of family, friendship, honor and courage among the brave men and women protecting our city streets. Marlow Stern of Newsweek calls the film “Riveting! The best cop movie in years,” while Roger Ebert, Chicago Sun-Times, says End of Watch is “Great!”

The Blu-ray™ Combo Pack allows consumers to view End of Watch anytime, anywhere on the platform of their choice. It includes a Blu-ray™ disc, a DVD, a Digital Copy and UltraViolet™ for the ultimate, complete viewing experience.

Bonus Features on Both the Blu-ray™ and DVD