I’m showing my age a little with this one.

When I was in grade school, Mighty Morphin Power Rangers was a constant presence in my mornings right before school.

Looking back on it, it really wasn’t that good, objectively.

It was cheesy, poorly done and I loved every second of it.

To appreciate good cinema, I’ve been told, you have to appreciate good schlock.  Power Rangers might as well be hard core drugs for small boys—it had everything: kung fu fighting, monsters that were beyond bizarre, robots, dinosaur power and dinosaur robots.

Originally based on footage from the Super Sentai series Koryu Sentai Zyuranger (literally “Dinosaur Squadron BeastRanger”) , this caused a lot of differences between the two (to the point where Power Rangers was actually dubbed into Japanese and aired to even higher ratings than its sentai counterpart).  Heck, Power Rangers was so popular that Saban (the company distributing Power Rangers) was able to commission new action-footage for them to use from Japan.

For this, though, we’ll look at both series as the monster featured is the most commonly used monster in all of Sentai, if you go by footage: the Putties. 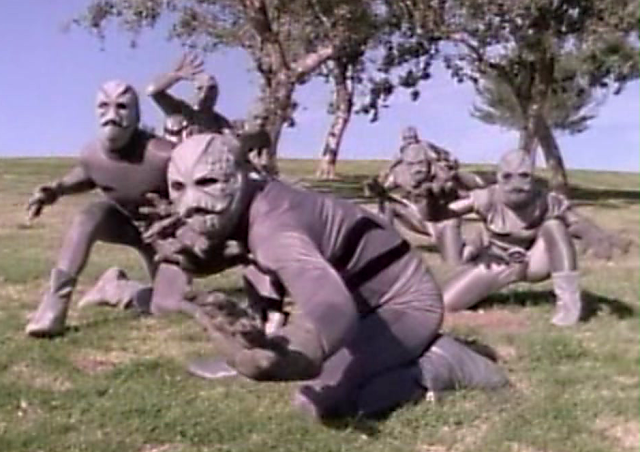 Biology
Called “Golems” in the original Sentai, where most of the villains had a western mythological counterpart (Rita Repulsa was “Bandora”, a play on Pandora; Goldar was “Griffozer”, a pun on Griffon; Scorpina was “Lamie”, a play on the monster Lamia; etc), the creatures are literally made out of clay and animated by magic, so biology has little to do with their construction.  Still, a rundown of what they can do and behaviors is appropriate.

Because of the show’s general minimal continuity (“hey, the kids won’t notice!  They don’t notice that the Yellow Ranger is actually a dude in the Japanese footage after all!”) some bits have to be taken from their Golem counterparts.  Visually, the two ‘versions’ can be distinguished only because the golems are slimmer, lighter in floor and have narrow slit-like red eyes.

Yes, I know the ethnic stereotype, but it was their design choice!

The putties are mass produced and do not have the artistic detail as the monsters do, which often leads to many being “half baked” as it were.  Usually, in their mental facilities.  The American show amped that up to very silly levels.

Their clay forms appears to remain a facet of their active lives, as they can partially mold themselves when well made.  Some can create wrecking ball-like maces over their hands, while others can turn their hands into long swords.  In the Sentai, the opening shows the creatures being blown apart by the hero’s weapons, only to reform and stand back up . . . in some of the cheapest stop motion I’ve seen.

And you thought I was joking about the Yellow Ranger being a man in Japan.

There’s also the rare ‘rocky’ variant which appears to be physically tougher than the others, often leading them.  Midway through both shows, the monster-maker gets better clay which makes the monsters and putties even harder to destroy. 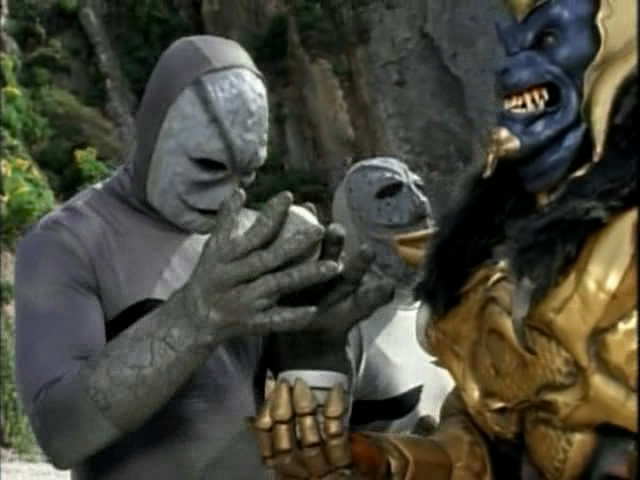 Symbolism
There’s two levels of symbolism here, one going deeper than the other.

On one level, they are mooks.  They are effectively faceless, disposable minions for heroes to mow through without morality qualms or worrying parents too much.  By rendering them more easily disposable than human mooks ever could be since they were just clay. 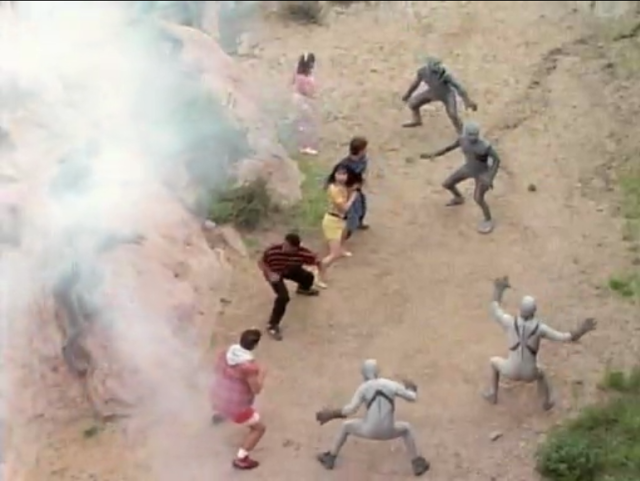 Today, robot minions fill the role by and large, and creators use that to their advantage to show extreme violence and “gore” being done to robots because censors are morons and don’t think machines count for gore, even when sentient.

But that’s more of a Samurai Jack and Clone Wars thing.  Let’s get back to the Putties.

The other symbolic level is really in the face. 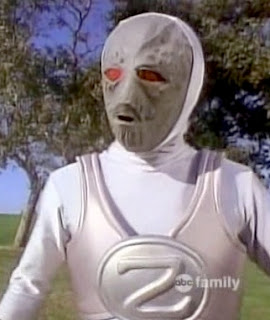 Humans identify each other through their faces (as opposed to many animals, which use smell).  The face of the putties is a basic deformation of that ideal.  It deviates from the normal facial features to such a degree that it registers as humanoid rather than human.  This is in part the uncanny valley effect, but softened.  Many children’s monsters have either extreme variation in their face to identify them as ‘wrong’ or ‘other’.  Here, the blanking of features achieves the same effect.

Combined with the garbled speech they’re given, they create a great childhood monster.   Again, however, the Sentai version is a lot darker, with repeated growls as their primary call.  In the American series, the Putties are given an ululating cry that could easily be used for teasing babies and toddlers.

Combined with their general applied silliness in the American release, and it becomes a true Ogre—a simple monster that is dangerous, but can be outsmarted.  They are the perfect adversary for humans who use their brains as their primary weapons.

The Putties, despite not being individual monsters, fill out that role in a modern sense.