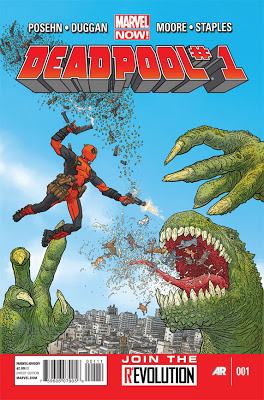 This could very well be the most fun you will have reading a comic book this year!

Someone has resurrected the deceased Presidents of the United States with a particular objective in mind.

The Avengers are on the case but there is one slight problem.

The image of watching Earth’s Mightiest Heroes strike down a great emancipator such as Abraham Lincoln on the nightly news is not in the nation’s best interest.

However, the “Merc With a Mouth” is the perfect candidate to slap around a zombified Harry Truman.

The script is engaging and clever while the art of Tony Moore produces some hilarious and horrific images.

Val Staples’ color treatment was delightful and brought the pages to life. Deadpool is a comic that doesn’t take it too seriously and with the Marvel NOW initiative in full swing, Gerry Duggan & Brian Posehn have done a phenomenal in the opening salvo of In Wade we Trust. 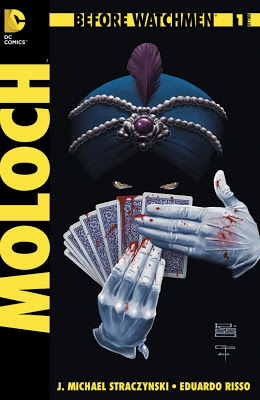 Moloch is a villain that Alan Moore didn’t shed much light on in Watchmen.

We merely heard about his transgressions but we never knew who Moloch really is or why he turned to a life of crime.

J. Michael Straczynski answers those questions with subtle characterization that makes you sympathize for him. Eduardo Risso’s depictions perfectly capture the innocence of a young Moloch which adds to the amount of sympathy you will have for the title character.

The cover discloses Moloch’s immersion into magic and this was a creative choice considering the origin of this pastime.

His use of illusion starts off heartfelt but turns lethal in the face or torment and ridicule. Moloch’s rise to criminality is similar to that of The Penguin. While Gotham City can be unforgiving, the world of Watchmen knows no bounds which goes to show that Moloch is truly a product of his environment. 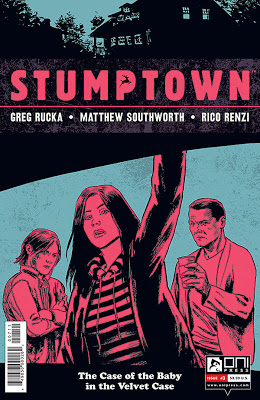 I’m convinced Greg Rucka could write a compelling comic book about paint drying on a wall.

Rest assured, there is nothing dry about this crime saga involving a rock star’s stolen guitar.

Fate has dealt Dex an incredible hand and now she has to decide if she is all in. The avenues she goes down create more problems and questions than ever before.

One of the great things about this series is it’s ability to keep coming up with interesting subplots.

This was a concern of mine going in, but after three issues there is no shortage of storytelling goodness.

The coloring in this issue took a different approach as it consisted of more neutral colors then the vast funky assortment of color.  It didn’t take away from the overall enjoyment of the book, but it was an interesting change to see.

This is a series that is not getting a lot of attention, but certainly deserves it. Emotion, action and suspense along with Dex’s exceptional ability to deduce the facts in the case makes this a series you want to keep your eye on. 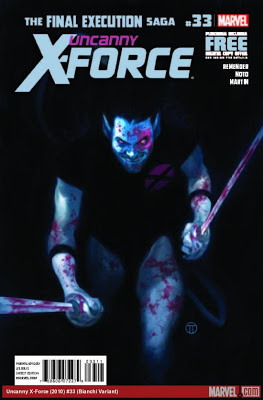 I almost didn’t read this issue because for me, this officially means we are one step closer to the conclusion of this remarkable series.

Daken and Wolverine have a lovely father/son chat that brings about some interesting food for thought.

The highlight of this book is the fight between Age of Apocalypse’s version of Nightcrawler and Fred Dukes because the gruesome ending is a creative one that you won’t see coming.

All of the events that are unfolding revolve around Evan as he is closer to becoming Apocalypse which is the main objective of the Brotherhood of Evil Mutants.

The story is carefully crafted with precise detail that puts this series in a league of its own. 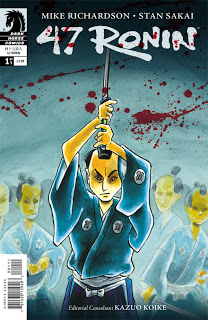 Mike Richardson lends his creative talents to the Japanese legend of the 47 Ronin.

The story follows Lord Asano who is a daimyo who finds himself in the midst of legislative corruption. Asano is a family man of high honor who struggles to maintain his composure amongst a slew of intrusive insults that question his honor.

The dialogue was a little off at times but overall, you feel for Asano.

Stan Sakai’s art stole the show with his beautiful imagery of feudal Japan.

The cover of the book kind of makes you think the story has some tie-in to Usagi Yojimbo with Sakai’s name on the cover but that is not to be.  The collaborative of the creative team suggests this is a passion project they have been working on for some time and they hit the mark with their first effort. 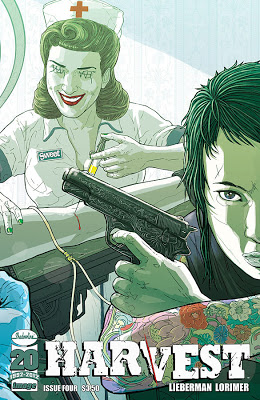 Harvest is the gift that keeps on giving which I think is weird considering it involves illegal medical procedures that take, take, and take some more.

To bring you up to speed, Ben Dane was the cat’s meow of surgeons until his coke habit made its way into the operating room.

Now, he spends his night harvesting human organs until he has a sudden change of heart. Ben’s plan to get himself out of this is not working out as planned.

The graphic imagery in this book is unlike anything in comics today. It’s not just gore for the sake of gore.

With one issue left, Lieberman will no doubt keep fans on the edge of their seat. 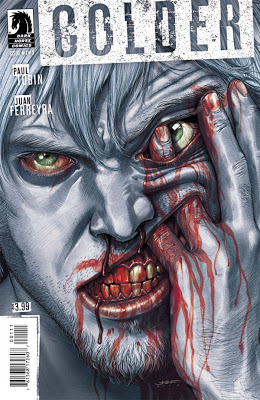 One look at this cover will no doubt thumb through the pages.  After that, your wallet will be four dollars lighter because this book is eerily irresistible.

We start out in the past and make out way to present day Boston where antagonist, Jack Nimble works his devilish charm to satisfy his appetite for unsuspecting souls.

Nimble is a thin and creepy looking individual who can contort his body in uncanny positions.

The lead character is a female nurse named Reece who cares for a live-in patient named Declan who Nimble is drawn to.

As good as the writing it, and believe me, it’s good, the artwork is even more amazing.

The smile on Jack Nimble’s face scares me a little bit because of the evil intentions behind it. It’s a special type of talent to capture such essence in facial reactions. The simple stuff that we normally don’t pay much attention to in comics is drawn in vivid detail such as the living room or Reece’s apartment.

Dark Horse has a sure fire winner on its hands the first installment of this psychological thriller has all the makings in an instant classic. This was ridiculously close to being my pick of the week.

Green Lantern #14 (DC Comics)
Baz comes face to face with the Justice League while the Guardians kick their plans into full swing.

Daredevil: End of Days #2 (Marvel Comics)
Reporter Ben Urich is determined to tell the story of Matt Murdock but it seems the rest of the world wants him to remain silent

Planet of the Apes Cataclysm #3 (Boom! Studios)
Parts of the moon have already come crashing down on Ape City and with more on the way, is anyone safe?

Iron Man #1 (Marvel Comics)
Nothing new or exciting if you are a fan of Matt Fraction’s run but a good jumping on point for news readers.