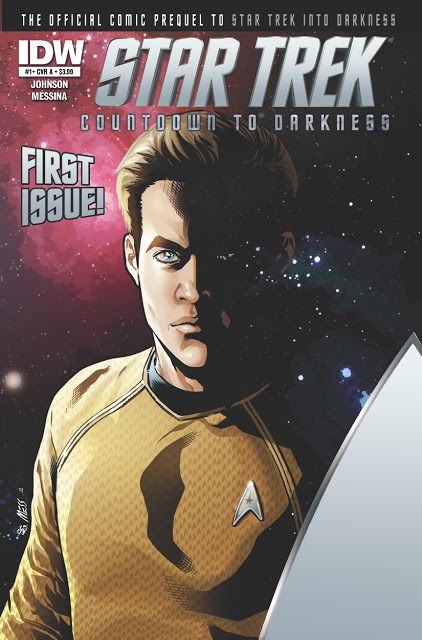 IDW Publishing will publish STAR TREK: COUNTDOWN TO DARKNESS, the official prequel series to Paramount Pictures’ upcoming movie, Star Trek Into Darkness. Like the best-selling Countdown series before it, COUNTDOWN INTO DARKNESS will be the only place for fans to experience the events that set the stage for J.J. Abrams’ sequel to the 2009 blockbuster film Star Trek.

Written by Mike Johnson with a story by Roberto Orci and art by David Messina, this 4-issue miniseries will lead directly into the May release of Star Trek Into Darkness, bridging the gap between the two films and giving fans an exclusive peek at the film’s mysterious story.

“We were thrilled by the reception that the original Countdown prequel comic received in 2009,” says Johnson. “We’re excited to be working again with David Messina and the team at IDW to bring fans an all-new original story that leads directly into the next film. Star Trek is back in a big way in 2013!”

Packed with the high-stakes adventure and sci-fi intrigue that has made the Star Trek franchise a global institution, STAR TREK: COUNTDOWN TO DARKNESS is sure to delight the legions of fans anxiously anticipating the continuing adventure of the intrepid crew of the USS Enterprise.

STAR TREK: COUNTDOWN TO DARKNESS digital comics will be available via the iOS Star Trek Comics and IDW Comics apps, online at read.idwpublishing.com, and in the Apple iBookstore.

“STAR TREK INTO DARKNESS” is written by Roberto Orci & Alex Kurtzman & Damon Lindelof, based upon “Star Trek” created by Gene Roddenberry, and directed by J.J. Abrams.  Abrams will also produce with Bryan Burk through Bad Robot Productions, along with Lindelof, Kurtzman, and Orci.