DJ and Chowder are playing hoops at DJ’s house, when Chowder makes a bad toss and the ball rolls across the street to Mr. Nebbercracker’s house.

Nebbercracker is a well-known neighborhood crank who hates kids.

When the boys try to recover the basketball, they have a confrontation with Nebbercracker, who has a heart attack. 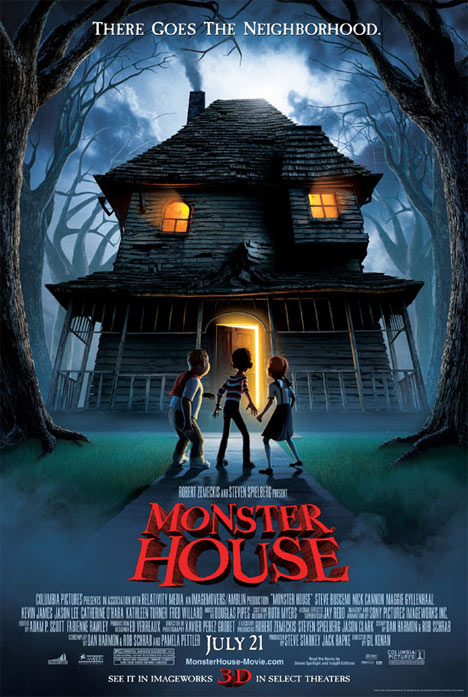 With Nebbercracker in the hospital, and Halloween fast approaching, the boys notice that, even unoccupied, the house’s chimney continues to smoke…and that’s the least strange thing they notice.

My usual topics in this column are story basics (character, context, conflict) and structure. These are just as relevant to an animated film as they are to live-action. 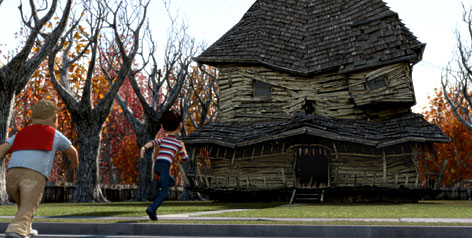 Our protagonist, DJ, is on the verge of adolescence. He can’t stay home alone, but his babysitter pretty much leaves him to his own devices.
He also possesses a great quality for any protagonist – DJ is active. When he and Chowder realize that something is wrong with Nebbercracker’s house, DJ wants to do something. When he tries to tell his sitter, she blows him off. Instead of giving up, he searches for some other way to protect his neighborhood.

Especially when Jenny shows up, selling cookies.
It’s this quality that creates conflict for DJ. He clashes with his sitter, and he just can’t ignore the horror squatting in the lot across the street.

DJ wants to be more grown up, but he has no idea how. In fact, Monster House is often more about the perils and pitfalls of trying to grow up than it is about a possessed house.

The movie is meant for families, so it keeps the structure fairly simple. It follows a tried-and-true scary movie formula:

Attempts by DJ, Chowder, and Jenny to deal with the house tick right through try, fail, learn something; repeat, until they learn enough about the house, and themselves, to save the day.

Overall
This movie won’t scare adults, but it’s got nostalgic charms for those of us too old and jaded to scare easily. If you’re looking for a way to introduce youngsters to horror, this might be a fine opportunity.

In this article:Animation/Anime, Movie Review, Movies/DVD, Written by Rich Redman