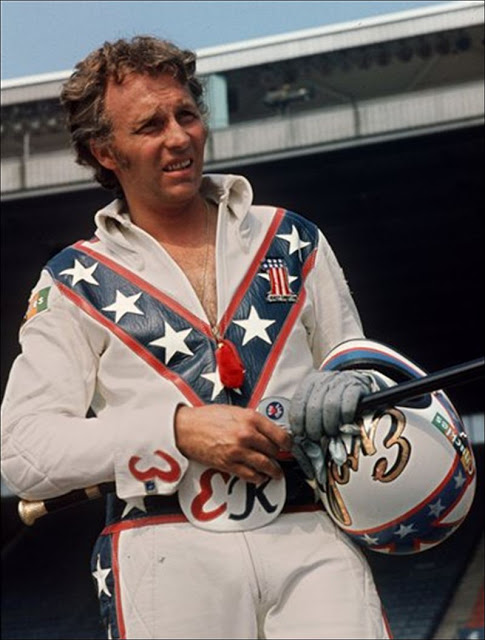 On May 26, 1975, Evel Knievel jumped 13 single-deck AEC Merlin buses at London’s Wembley Stadium (and it was televised by ABC so the whole freaking world could watch it) and, barely clearing the 13th bus, landed on the ground only to have his motorcycle LAUNCH HIM OVER THE HANDLEBARS where a toddler (me) then got to see his seemingly-lifeless body bounce around for a while until his motorcycle SLAMMED INTO HIM.

As I screamed, the daredevil extraordinaire was helped up, foregoing a stretcher, and announced to a stunned audience that we were “…the last people in the world who will ever see me jump. I will never, ever, ever, ever jump again. I am through”.

And now, thanks to Joe Maddalena (who runs the Profiles in History Hollywood Memorabilia Auction house- which is featured in the reality show Hollywood Treasure) you have a chance to bid on Evel Knievel’s jumpsuit and helmet that was in that famous jump. 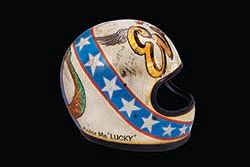 The helmet, which is scratched to hell and probably is stained in blood and hair, is expected to fetch anywhere between $60,000-$80,000 dollars.

While the red, white and blue leather jumpsuit (which is almost as famous as Elvis’s own jumpsuit): 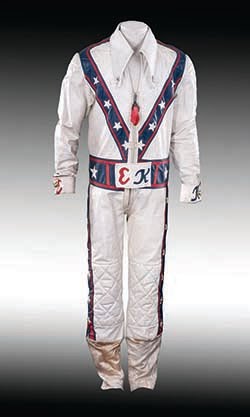 I think I’ll pass as I have yet to overcome my first introduction to possible death.

In this article:70s, Auctions, Celebrity/Gossip, Nostalgia