I have a wee confession to make.

Even though I live left-of-centre in the heart of Tokyo (actually Setagaya, about 25 minutes by train from Shibuya), lately I haven’t been thinking about Japan at all.

My brain has shelved lingua franca, ignored the neon signage, sushi train restaurants, the manga and anime – heck, even the saké.

Instead, I’ve had my head stuck in comicbooks.

And, yes, I do put the two words together (“comic” + “book” = “comicbook”) since I recently saw Stan Lee’s rant on Twitter about doing so. 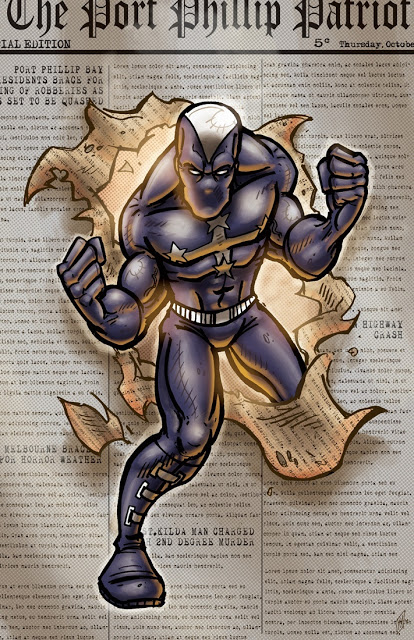 No that I’m having a go at Lee regarding said rant.

What he said rang true, and the truth is I’ve been pretty much a life-long fan of The Man.

My next novel, which I actually just finished writing this week (I’m still editing and tweaking it into better shape) is called Who is Killing the Great Capes of Heropa?…and it’s an homage to what Stan Lee established at Marvel in the 1960s – the so-called Silver Age of comicbooks – aided and abetted by creative types like Roy Thomas, Jack Kirby, Jim Steranko, Syd Shores, John and Sal Buscema, Barry Windsor-Smith, Artie Simek, George Roussos and Sammy Rosen. 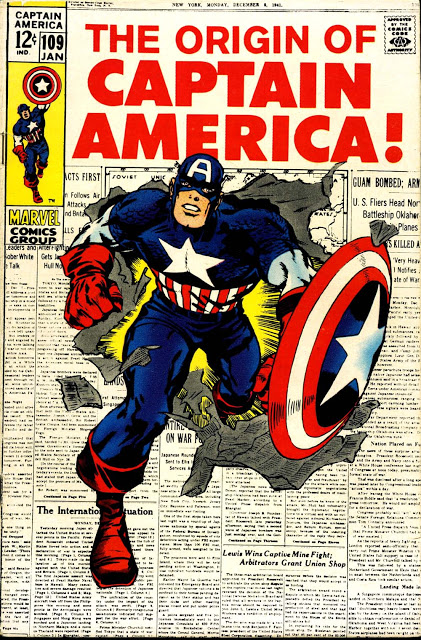 In October last year I whizzed back to my hometown (Melbourne), ostensibly to “launch” my first novel Tobacco-Stained Mountain Goat, but really to harangue friends and family.

While crashing at mum’s place, I rifled through some boxes I’d stored with her, mostly extremely old stuff – and rediscovered an envelope that’d been sent from Marvel in New York.

They were returning a letter I’d written – correspondence using a manual typewriter on foolscap, in which I resorted to way too many semicolons – along with my enclosed picture of a superhero I’d conjured up and nurtured in high school, an Australian since I felt American comics were lacking a decent Aussie character.

This was a lead pencil drawing of an upside down superhero without a cape, with little details written in blue ink, arrows pointing this way and that. It said ‘Southern Cross’ in bigger letters on the upper right hand side of the page, next to more detailing in cerulean blue: two boxes that showed a stars-and-stripes logo for the front of the costume, and a boomerang motif of the hero’s initials, SC, supposed to go on the back. 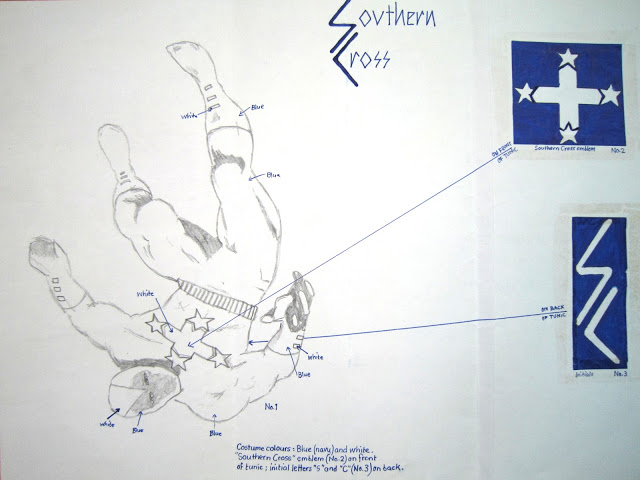 I actually received two envelopes with Marvel’s company address in New York on the stationery, along with a picture of Spider-Man and a U.S. stamp, but the postmark on the second one, also sent in the 1980s, is illegible

The first letter knocked off my socks. It was penned by Stan Lee’s personal secretary and in it she said that The Man really dug the Southern Cross character – and although retired from active duty, he would be passing it on to Marvel’s current Editor-in-Chief, Tom DeFalco.

Sadly, Tom was not so enamoured, though he wrote a nice rebuttal. Hence the second letter, returning my correspondence and the picture, and Southern Cross remained buried and mostly forgotten in cardboard boxes in Melbourne.

Finding him again, I got to thinking about two big influences on my life, imagination and writing: noir and comicbooks. Why not combine the two, and at the same time pay homage to the silver age (1960s) Marvel stuff and its bronze age (1970s+) successor – along with some of the manga stuff I’ve also picked up on over the years living in Japan?

So it shouldn’t surprise anyone that Mamoru Oshii’s Kerberos Panzer Cops and Masamune Shirow’s Ghost in the Shell get a shoo-in. 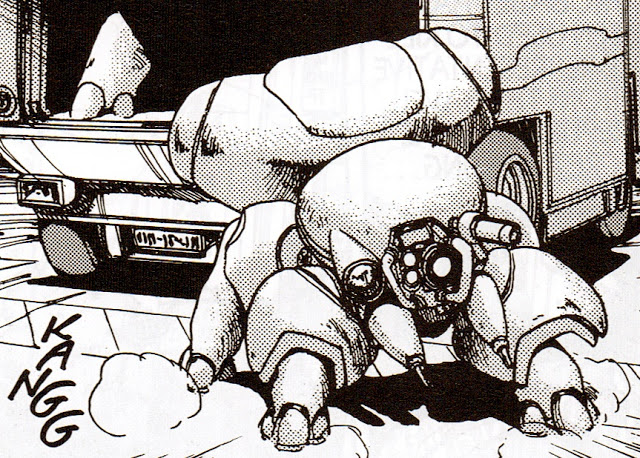 But American comicbooks are the true star here, supported by their international brethren.
The writing of Roy Thomas and Stan Lee during the “pop art” swinging ‘60s, particularly their vehicles The Fantastic Four, Captain America and The Avengers, was stuff I grew up with and adored thanks to a stash of comics from my older half-brother Peter.

These people may have been superheroes, but they bickered and wore human failings on their sleeve just like everyone else.

When I had delusions of being a comic writer/artist (back in high school), I was heavily influenced by the art of Jack Kirby, Jim Steranko and Barry Windsor-Smith, along with Thomas and Lee’s yarns.

The art, in particular, was superb. 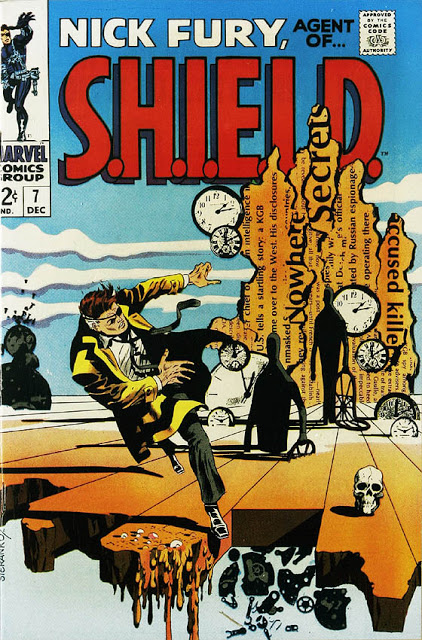 These influences have continued, somewhere in the back of my noggin. I still regularly read old comics, and with this book I wanted to pay some kind of tribute to them – along with a definitive nod to the 1930s/’40s noir of Dashiell Hammett and Raymond Chandler (and their movie off-shoots), which I also adore. There’s also an element of DC comics and golden age 1940s comics tucked in, Judge Dredd, Sherlock Holmes, Barbarella, Ghost in the Shell, Breakfast at Tiffany’s, the USSR, British comedy, manga, dada and art deco. 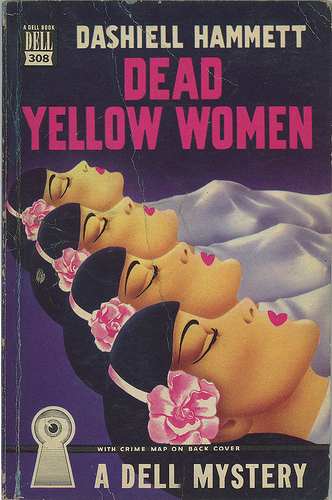 The resulting 95,000-word tome, written over the past half-year, is difficult to categorize. Something along the lines of noir-cum-superhero-cum-dystopia.

I’ve also been lucky enough to work with some talented contemporary comicbook artists (including Paul Mason & Giovanni Ballati, who did the pieces here), plying their trade in vague homage to Jack Kirby’s work in the 1960s.

There are some completely obscure references in there, too, keeping myself partially amused along the way. 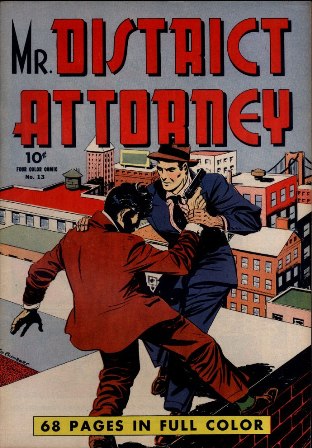 The acting synopsis is as follows, but no doubt this will change once I inject a more inventive approach: A vast, homogenized city patrolled by superheroes and populated by the adoring masses, a perfect place a lifetime away from the rain-drenched, dystopic metropolis of Melbourne – so, who is killing the great capes of Heropa?

I’m looking to publish this baby in 2013, fingers well and truly crossed, but now comes the hard part: the final tweaking/editing and overcoming what I call George Lucas Syndrome – actually letting go of the beast, submitting it to the publishers, and forever holding my piece… typos be damned. 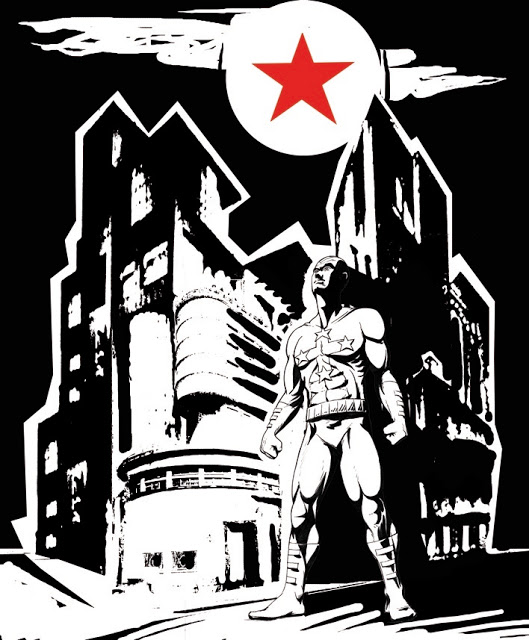