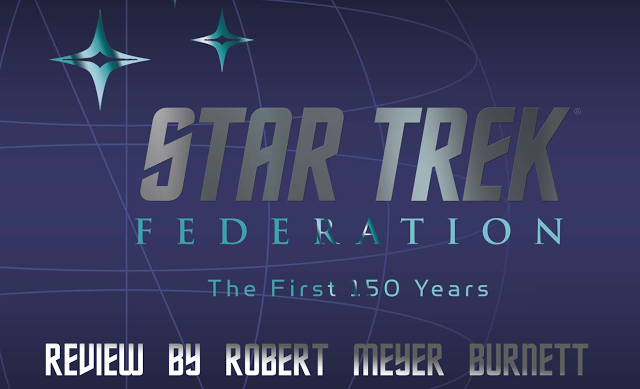 I wish it were possible to convey just how much of my youth I spent living in the 23rd Century.

According to my mother, I started watching STAR TREK sometime in the early seventies, around the age of four, probably just after the series hit syndication on Seattle’s then indie Channel Eleven.

Airing every night at 6:00 PM, I don’t think I missed a broadcast in ten years. My family’s dinner habits were defined by my TREK obsession. My father read me the James Blish episode adaptations before bed, sometimes even a story I’d seen mere hours before. As I built yet another AMT model kit of the Enterprise, I fantasized about walking the decks of the starship, waiting to be called to join a Landing Party and put in harm’s way. In elementary school, I even recruited other kids to play TREK in the playground, showing them how to correctly interpret the characters when I didn’t feel their portrayals passed muster.

But aside from the show itself, a few books, the Mego action figures and model kits of the hero starships, the STAR TREK universe lived mostly in my imagination. I remember desperately, agonizingly, wanting to know more about that universe, which I understood to be much, much larger than what I saw on the episodes every week.

The series offered tantalizing glimpses of other starships, star bases and personnel, so I knew there was a whole lot more going on in the TREK universe than simply the adventures of Kirk, Spock and McCoy. I remember feeling frustrated I’d probably never know if the miners of Janus VI really did work out their differences with the Horta, whether or not Apollo ever found his fellow gods again or if Mirror Spock did, indeed, heed our Kirk’s advice, take command of the ISS Enterprise and bring down the Empire.

There was no way to know any of these things of course, unless I used my limitless imagination and made up new adventures myself.

Through the use of my models and toys, I did this frequently, making up new TREK adventures, answering all the nagging questions I had about the universe. But, no matter how clever or interesting any of my imagined adventures may have been, I knew ultimately they just WEREN’T REAL. My own stories would never be what ACTUALLY HAPPENED in the 23rd Century.

I’d face this frustration for the rest of my life.

But then, in 1975, something happened to my imagination so profound and expanding, the entire Trek universe as it currently existed in my mind’s eye winked out of existence, as if Lazarus from “The Alternative Factor” suddenly jumped into my head, only to be replaced by a new and expanding universe where the possibilities of STAR TREK grew infinite.

Well, Ballantine Books released both Franz Joseph Schnaubelt’s Star Trek Star Fleet Technical Manual and his Star Trek Blueprints, comprised of a “complete set of 12 Authentic Blueprints” of the USS Constitution, the first ship of the same starship class as the USS Enterprise.

More importantly, though both of these works came from a publisher based squarely in the 20th Century, they were presented as “in universe.”

That is…in every respect, both the Technical Manual and the Blueprints were conceived, created and executed so they appeared to actually COME FROM the 23rd Century! Apparently, these were actual artifacts from a very real future!

The STAR TREK universe was no longer just on television, or in my imagination, but now absolutely REAL. And I had the texts to prove it.

I spent literally years pouring over these books, which were followed by other official releases, including the Star Fleet Medical Reference Manual and the Star Trek Maps.

Countless other unofficial fan-produced works followed, including everything from blueprints of the robot grain ships from the animated “More Tribbles, More Troubles” to the excellent USS Enterprise Officer’s Manual, published after the release of STAR TREK: THE MOTION PICTURE. Whether official or unofficial, each followed in the footsteps of the format pioneered by that original tech manual and blueprint set.

These releases also gave birth to the “backgrounder” fan movement, fans who took it upon themselves to explore and extrapolate on every technical aspect of the fictional Trek Universe. Many of these fans, such as Star Trek: The Next Generation Companion author Larry Nemecek, made the leap from daydreamer to professional Trek pundit because of these works.

As the years past, the in-universe format became ubiquitous, used in everything from the Starlog Magazine-published Moonbase Alpha Technical Manual, to roll playing gaming manuals to the Blue Blaze Irregular newsletter, published by Fox to promote the release of BUCKAROO BANZAI.

For this long-time Star Trek Reference Book fan I honestly thought the heady days of officially released in universe Trek reference materials had long since passed.

Luckily, I was wrong.

Television writer David A. Goodman, formerly of STAR TREK: ENTERPRISE and the Nebula Award-nominated FUTURAMA episode “Where No Fan Has Gone Before,” in addition to serving as lead writer and executive producer of over 100 episodes of FAMILY GUY, has come out with his first book, offering up to us starving in-universe fans the ultimate Trek book, the absolutely wonderful coffee table-sized FEDERATION – THE FIRST 150 YEARS. 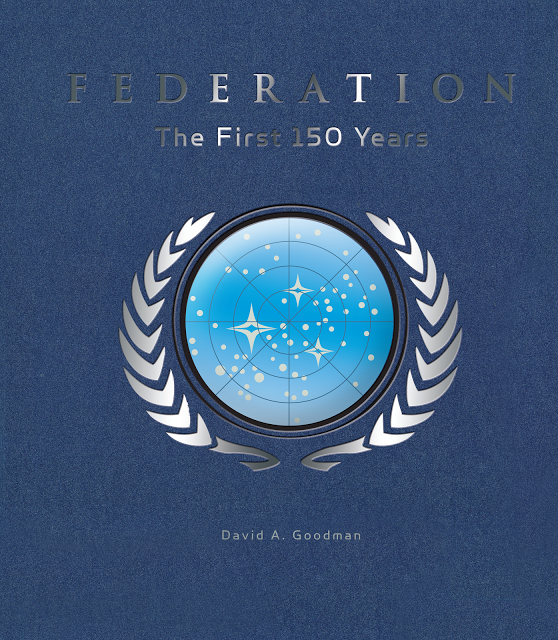 Following in the footsteps of other TREK professionals, such as Rick Sternbach and Michael and Denise Okuda, who’ve also contributed extensively to previous in-universe works, Goodman’s professional Trek writing background adds perhaps the most authenticity of any such book, and canonistas will have no problem embracing his account of the TREK future as “fact.”

As with all great in-universe books, author Goodman assumes the role of David A. Goodman, a twenty third century Memory Alpha Historian.

In his “a note on sources,” opening the book, Goodman, clearly taking a cue from Max Brooks’ WORLD WAR Z, claims, “The following history was commissioned by the Council of the United Federation of Planets to celebrate the 150th anniversary of its founding. The true story that follows is based on first-person interviews, official documents, letters, personal and official logs, journalistic accounts, and memoirs.”

He had this OG in-universe fan at hello. 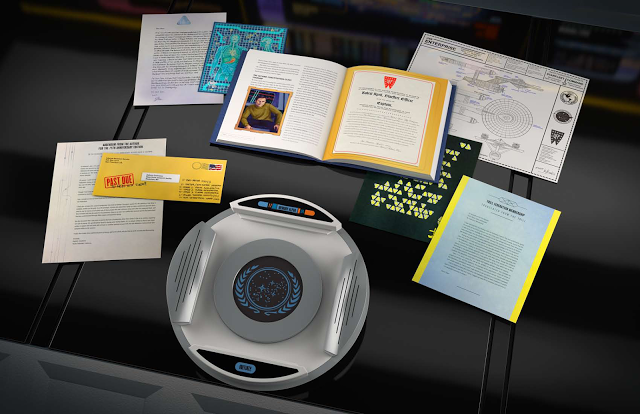 Broken into a prologue and four massive chapters, spanning the years between Zephrem Cochrane’s first warp flight in 2063 through the later years of James T. Kirks’s exploits in 2290, the book covers the massive events hinted at in the various TREK series, but never really seen on camera, such as the Romulan War and the founding of the United Federation of Planets.

Like all great “in-universe” books, author Goodman goes to great lengths to keep everything feeling authentic from his “early 24th Century” vantage point, painting a vivid and convincing picture of where people, places and events fit in to the overall story of the founding and evolution of the United Federation of Planets.

I took particular delight he cited the “Star Trek Spaceflight Chronology,” released in 1980, just after THE MOTION PICTURE opened, as an influence.

With its extensive artistic contributions from long time Trek professional Rick Sternbach, the Spaceflight Chronology was first officially released work to attempt creating an in-universe historical overview of the TREK Universe, and I dearly loved it.

Unfortunately, the book was completely invalidated with the coming of THE NEXT GENERATION.

The book, as with all other in-universe works, will remain canon until more “real” STAR TREK comes along to disprove or otherwise invalidate Goodman’s take on events.

I loved reading all of the “official” documents presented, referring directly to many beloved episodes of the series, extrapolating upon various incidents and characters. There’s some really clever stuff going on here for both the casual and the die-hard fan.

The book’s only drawback are some of the many illustrations feel as though they come from the children’s storybook version of Federation, diminishing the in-universe feel. If the book actually does come from the 24th Century, as its stark yet convincing cover suggests, one would think the future of digital imaging could more accurately recreate important historical moments as opposed to the almost childlike watercolor-esque feel to many of the images presented. 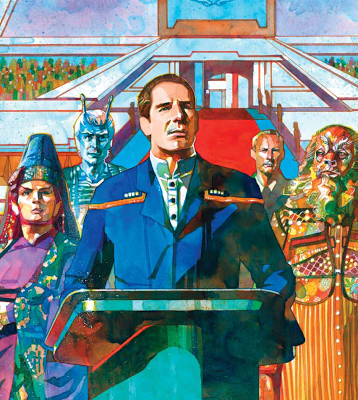 With the upcoming release of STAR TREK INTO DARKNESS, which takes place in an alternate STAR TREK Universe with a largely undocumented history, FEDERATION, and its insightful, immersive and just plain wildly entertaining look at the “real” Prime Trek universe, was a much-needed blast of classic STAR TREK for this lifelong fan.