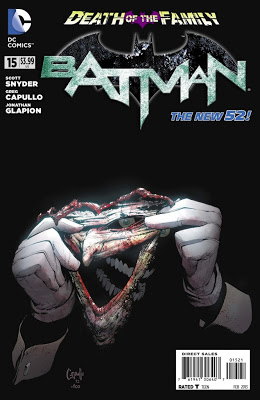 The “Death of the Family” story arc rolls on and The Joker has the entire Bat-Family on edge.

Scott Snyder’s writing has done a wonderful job of accentuating the fear of our clown-faced villain. Every superhero has an arch nemesis, or ten, and despite the trials and tribulations, they are confident they will win the day.

Batman is probably the most intelligent and savvy crime fighter in the game today. This would make you assume he too is confident that he will stop The Joker.

However, he’s not confident at all.

In fact, he is so unsure of the final result, he is keeping his cards close to his chest.

Speaking of cards, one card in particular has brought to light a shocking revelation regarding The Joker’s potential intrusion into the Batcave, many years ago. Dick, Jason, Barbara and Damien are beyond upset this was kept from them and are convinced The Joker knows their secret identities. Bruce believes he doesn’t know their identities and is just playing mind games.

Dick notices that Bruce doesn’t sound so sure of himself and this leads to a four-on-one tension filled argument that was almost uncomfortable to watch, in a good way, of course.

The backup story written by Talon scribe, James Tynion IV puts the spotlight on The Riddler who makes his “New 52” debut.

Instead of the dangerous riddles we are accustomed to; it is his intelligence that Tynion brings to the forefront. Not being rattled, in the slightest by The Joker’s antics while locked up in Arkham Asylum paints the green menace in treacherous light and he will no doubt; bring The Dark Knight some serious problems in the future. 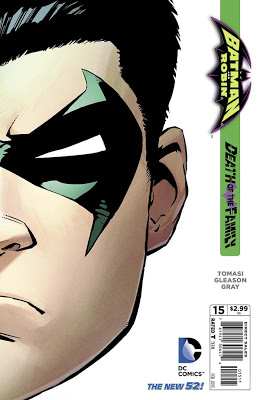 To say the Joker’s history with the Robin character has been violent over the years is an understatement.

It’s Damien’s turn to see what all the fuss is about.

Damien is as arrogant as he is deadly and believes he will succeed where the other Robins have failed as it relates to Harley Quinn’s Mister J.

Peter J. Tomasi gets the nod to write their first confrontation and Patrick Gleason and Mick Gray get to draw the goods.

Damien broke that rule with ease in the first six issues of the series and has struggled to not kill anyone ever since.

The newest Robin believes the Joker is just another run of the mill lunatic until the evil clown gets the upper hand in their encounter. The venomous and twisted dialog spewed towards the pint sized crime fighter, as he hangs upside down in a lion’s cage makes him respond the five simple words: “I’m going to kill you.”

Now, Damien knows the hype around his father’s arch nemesis is justified. Tomasi and company perfectly execute this moment of realization.

While Scott Snyder is getting all of the props for his Joker portrayal, Peter Tomasi holds his own in that department while producing another exciting chapter in this sprawling story. 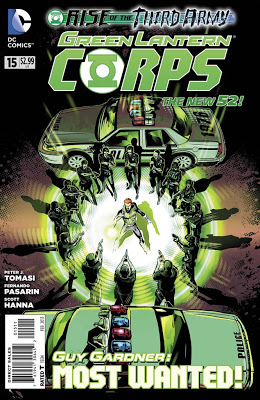 The Third Army’s assault on free will has taken its toll on Guy Gardner and left him ring-less on Earth.

With no real power and everyone on the planet knowing he’s a Green Lantern, he decides to fight crime in his home town.

Hey, if Batman can do it without powers, Gardner can too, right?

Meanwhile, in space, Mogo is trying to put himself back together and he has help from the very Lantern who blew him up, John Stewart.

This was, without question, the most well-paced story of the week.

The transitions from the Gardner family drama to Salaak’s discipline at the hands of the Guardians was seamless and truly showed how no one in the Corps is safe. The artwork was nothing to complain about and really shined when it needed to.

Peter J. Tomasi should pat himself on the back for producing two of the best comics of the week. 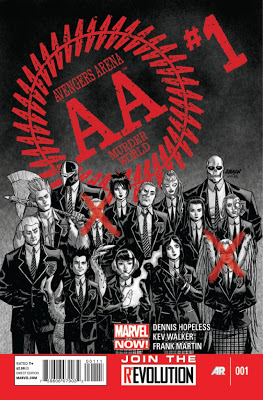 A lot of people rolled their eyes when they heard the concept of Avengers Arena.

Killing comic book characters is a cheap parlor trick. Even more people rolled their eyes when the cover of this book was released because the logo is identical to the logo of the critically acclaimed Battle Royale movie.

I think the perceived lack of originality gave fans a wait and see attitude instead of looking forward to the next Marvel NOW release.

The Young Avengers other super powered teens are kidnapped by Arcade and brought to Murder World where they are given 30 days to kill each other until one is left standing.

If you have never seen Battle Royale, you can also draw a comparison to The Hunger Games.

Writer Dennis Hopeless pulls no punches and starts things on a dramatic foot when death breaks up the romantic couple of the bunch. I thought it was a good first effort but the legacy of this book will all depend on the end result.

You don’t know if this is meant to be a long term series with the 30 day timeline or a cheap way to get rid of some characters that will probably come back anyways. 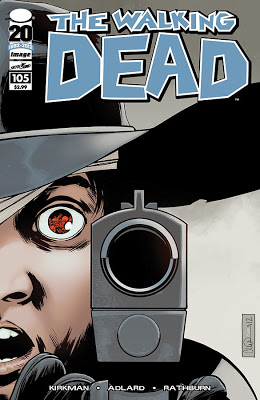 No action and no zombies is no problem for Robert Kirkman as he pulls back the curtain behind the series’ new bad guy, Negan.

Everything we see is through Carl’s eyes as he was taken captive in the last issue.

Negan is a sadistic prick and shows little respect to those to show him complete loyalty. I don’t even want to talk about what happens to those who happen to sleep with one of his four wives.

Kirkman did a wonderful job of establishing Negan on his own terms instead of trying to create a new Governor.

There is nothing refined about Negan and his approach to things. Kirkman also magnifies the intensity of the situation as Negan takes Carl through his community.

That is what really made this issue shine because you legitimately didn’t know which way it would go. 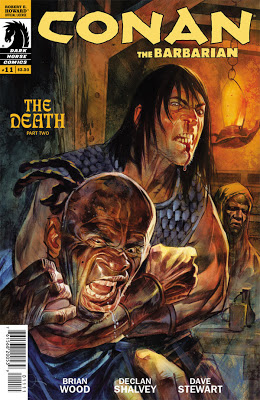 The second part of “The Death” has been a story line that truly tests the mental resolve of Conan.

Everyone around him, including his love Beliet, is dying due to a plague.

Conan travels to find a cure and time is not on his side. Brian Wood has done wonders for the comic book side of this franchise and has a genuine affinity for the title character.

Wood puts Conan in a situation where violence is not the answer even though it might be his only option. It is quite possible that this issue shows Conan at the peak of his anger because he doesn’t want any trouble, which he normally welcomes.

Finding a healer is his all that matters to him. DeClan Shalvey’s art keeps up with this book’s tradition of fine character work, graphic action sequences and great depictions of emotion.

The ending of the chapter brings about some grave consequences for the road ahead. 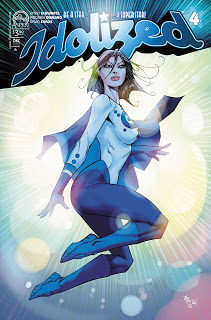 Joule has accomplished phase one of her goal.

She made it through the “Superhero Idol” contest and is now the newest member of the Power Protectors.

Now she is close to exacting her revenge on the book’s bad guy, Stasis, who killed her parents.

David Swartz’s strong characterization of Joule is what drives this book. Most people want fame and fortune and those who luck into it usually yield to its luster.

Joule is not fazed by it for one moment.

Nothing else matters except her objective. Pasquale Qualano produces the best artwork of the week. Everything is drawn with superb detail and the craftsmanship of David Curiel’s coloring brings it all together in one nice superhero package.

Decisions are made that rock the foundation of the entire story as the world that loves Joule is about to rain on her parade. This book was beyond close of being my pick of the week.

Cable & X-Force #1 (Marvel Comics)
Not as good as Uncanny X-Force, but what is? This black ops book is filled with potential. Domino fans will enjoy this issue.

Clone #2 (Image Comics)
Luke finds out he is not alone and that all of his problems are a product of his father’s work.

Batgirl #15 (DC Comics)
You all have been cordially invited to the wedding of Batgirl and The Joker.

Atomic Robo and the Flying She-Devils of the Pacific #5 (Red 5 Comics)
Read the first four issues before checking out this delightful story with some fun artwork.