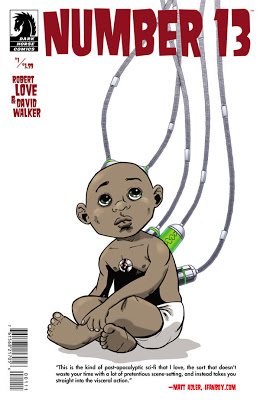 If you have ever believed the expression, “It’s not what’s on the outside, but what’s on the inside that counts,” then Number 13 will prove you wrong.

Robert Love and David Walker’s post-apocalyptic tale takes place 60 years in the future. The Monstrum Morbus plague has virtually wiped out the human race and in its place are the “fected” and “mune.”

This book wastes no time in getting to the good stuff.

A band of fected stumble across a little boy with the number 13 stamped on the side of his head and a device in his chest similar to Tony Stark’s arc reactor.

Once #13 is re-activated, he not only shows off his unique abilities, but a signal is sent to a secret laboratory where his creator, a scientist called Father, becomes aware of #13’s re-activation and sends out a search party to find him.

Robert Love not only writes a good story but also draws an excellent one at that. The depictions and character work pop in every panel and Brennan Wagner’s color treatment put it over the top. Definitely, this is the best artwork of the week. It’s funny how things work out sometimes.

Just like in the X-Men universe, where humans hate mutants, the mune hate the fected and are in a similar battle but the biggest casualty, so far, is the world we know.

Bottom line, this comic book is a perfect example of good science fiction as it will captivate every fiber of your imagination. 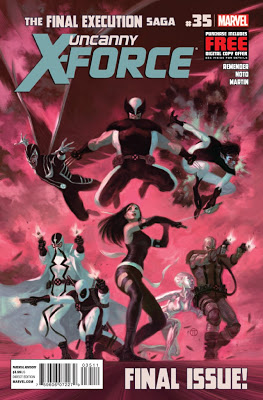 Unfortunately, all good things must come to an end.

For Rick Remender, Uncanny X-Force is his Mona Lisa of comic book goodness.

For thirty five emotionally charged issues, this black-ops saga created something special that fans deeply appreciate and won’t soon forget. The carefully crafted detail in which Remender created his stories with has set the bar extremely high for any present or future X-Force books.

Despite the number of artists that have worked on this series, Phil Noto’s artwork enhanced Remender’s characterization the most.

The scenes where Deadpool replaces Evan’s heavy reading with a Playboy magazine and Wolverine’s posture during his inner monologue are indicative of his outstanding contribution to this series.

Nothing Earth shattering occurs in this issue, but Rememder wraps up everything in a nice little bow. 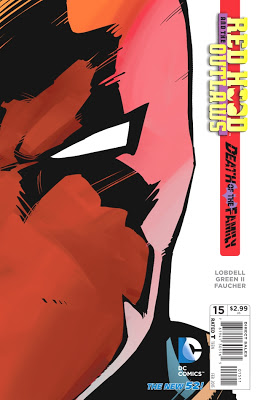 Death of the Family is the pivotal event going on right now in the Batman titles in DC Comics.

Nine times out of ten, tie in issues are not worth reading. That has been the complete opposite in this case.

The Joker has The Dark Knight looking over his shoulder, at every turn, and has put it out there that he is going after each member of the Bat-Clan.

The Joker has more history with Jason Todd than anyone else on Batman’s friend’s list.

I mean he killed him for crying out loud.

Scott Lobdell asks a unique question: What would you do if you got a chance to confront the person who killed you?

It’s something that no murder victim can ever answer.

Jason Todd gets to try as he is tied up against a wall and at The Joker’s mercy. Timothy Green did a good job at depicting the chaos this sort of story brings to the table.

The most powerful set of panels is when Joker holds a crowbar up to Todd’s face and teases the idea of an encore performance. Lobdell references back to September’s zero issue where it is alluded to that Joker has had a hand in everything going on in Todd’s life leading up to his death.

Of course, Todd doesn’t believe him, but there is evidence that suggests it is true. 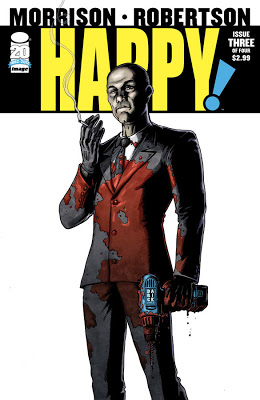 Nick Sax is the product of an ugly world that might not deserve redemption.

Happy, the imaginary flying blue horse, on the other hand, needs Nick to realize redemption is a worth while endeavor in order to save a little girl named Hailey.

There is a twist involved that you will probably see coming from a mile away.

However, the meat and potatoes of the story are in Nick’s realization which is executed in a way that only Grant Morrison can deliver. The fine detail in Darick Robertson’s art truly captures the imagery of a grim world.

You have to give credit where credit is due when something imaginary is the best part about the world portrayed.  Happy drives the story and Morrison increases his importance to the point where a determined Nick Sax could be a very bad thing for drug dealers, pimps and low-lifes.

Well, just like Happy, his importance has increased too, and not in a good way. Merry Christmas! 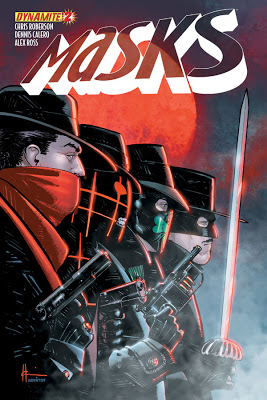 The corrupt entity known as The Justice Party has taken over New York.

Lawmakers bend the law to their will in order to line their pockets. This is a problem too big that will take the combined effort of masked greats to make things right.

This issue picks up where the last issue left off as our heroes meet each other for the first time while battling armor-plated, and crooked, cops. The Shadow inserts himself as the leader and demands a retreat in order for our newly assembled team to formulate a game plan.

Chris Roberson’s direction not only sets a great pace but also expands on the gravity of a violent situation.

He reminds readers of what can happen in a police state as prisoners are executed simply because “it is easier.”

I wish Alex Ross was doing the artwork. Dennis Calero’s art did a serviceable job, but Ross’s work set the bar high and help set the tone for what could be an epic comic book series.

Anything else is just a letdown, despite how good it is. Another thing that makes this story fascinating is the fact that the masked heroes are millionaires. This sends a message, in small way, but still a message, to a world where the 99% feel violated by the rich 1% that there are good rich people in the world that do and will continue to do great things for the benefit of everyone. 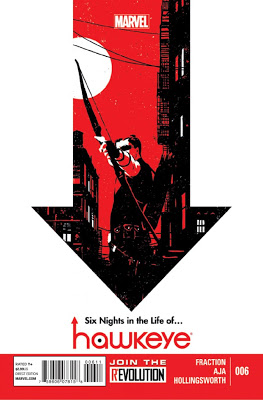 If you ever wanted to see how Clint Barton spends the holiday season, then look no further, you’ve found it.

The story jumps back and forth between six days where Hawkeye is burnt out and decides to take a vacation. How does an Avenger spend their time off?

By catching up on the popular TV show called “Dog Cops,” of course!

The funny part is that Hawkeye can’t even hook up his old television set up, so he calls Tony Stark for the assist. There are a boat load of shenanigans that occur from A.I.M. claiming that they are the 99%, to Clint having to fight off the Russian track suit mafia.

This book has something for everyone and David Aja’s art captures all of it.  His ingenious page layouts set themselves apart from anything else in comic books today.

Some people have told me that the artwork has turned them off from reading this book. It almost did the same thing to me, but once you take the time to really read everything in this book, you will have a greater appreciation for Hawkeye and the creative talents of Fraction and company. 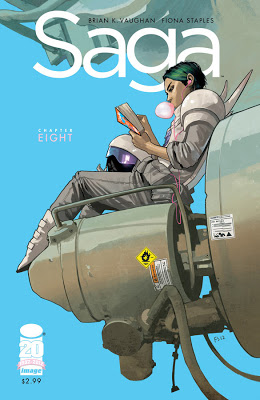 Like Daredevil, I keep waiting for an issue of Saga that is going to disappoint me, and thankfully, both titles never ceases to amaze me.

We get to see how Marko and Alana met and let’s just say, it anything but love at first sight.

What I liked about this moment was that Alana looked the happiest we’ve seen her in the entire series.

Of course, this is all before her current life on the run but it shows what could be for her, Marko and Izabel, if they are able to survive the war.

Speaking of Izabel, in many ways, she is the star of this series and we’ve only seen her in toddler form as it is her future self that narrates the story.

Brian K. Vaughan is able to enthrall readers with every faucet of the story no matter how big or small it may be.

There are no words to describe how talented Fiona Staples is so I’m not going to try and construct a sentence in doing so.

All in all, Saga is the gift that keeps on giving. Pick up the graphic novel if you are looking for something for the comic book reader in your family.

Evil Ernie #3 (Dynamite Entertainment)
Ernie’s evil origin story continues as his step father wants his powers and the only way to do so is to eat Ernie’s heart.

Hellraiser: The Road Below #3 (Boom! Studios)
Everyone wants Kristy Cotton, the Cenobite Queen the on their side. She wants no nothing to do with nobody but her hand just might have been forced.