During China’s warring states period (475-221 BC), there is a huge battle between two major forces.

He takes the general prisoner and begins a long journey to collect a reward.

Now, that sounds promising by itself, but when you realize that the older, simple, soldier is Jackie Chan, you expect humor, action, and high adventure. 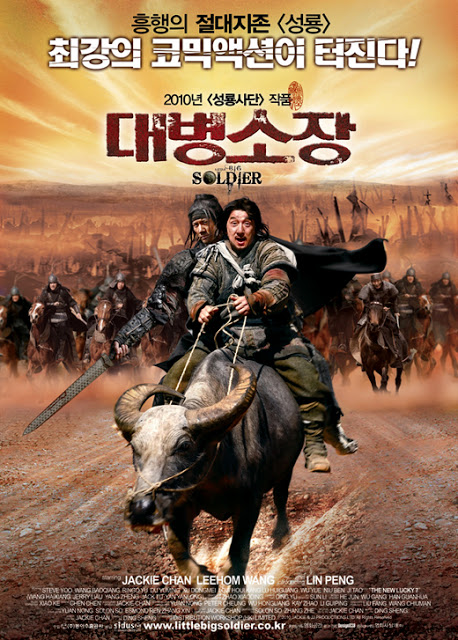 Unfortunately the humor is weak, the action is mostly in the hands of others, and there’s a lot more talking than adventure.

Now, I don’t want you to think I’m slagging on Jackie.

I’m a big fan. I know the (brief) moment when he shows up in Enter the Dragon (which also includes two of his fellow students from the China Drama Academy, Yuen Biao and Sammo Hung).

I’ve seen his early attempts to break in to America, including The Big Brawl and both Cannonball Run movies.

Jackie has said publicly that 2012 will be his last action movie. He says he’s not young anymore (he’s 58), and that he is really, really tired. 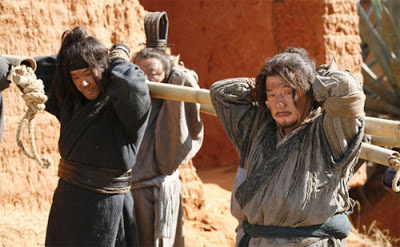 I can respect that, considering all the things that he’s done to himself over the years.

I can also respect the time he put into Little Big Soldier. He started on the idea 20 years ago, originally intending to play the young general.

There are three important areas of story: A character, in a context, with a conflict. Little Big Soldier fails in two.

I recently wrote (in my Halloween column) about a Spanish movie that had a long prologue about events during the Spanish Civil War. I felt that prologue was largely wasted on non-Spanish audiences.

I think that lesson applies here, too. 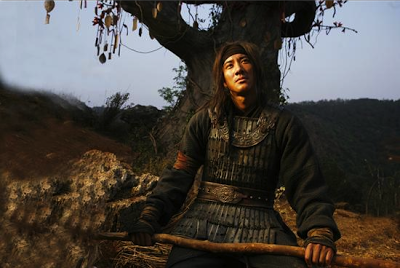 This is a delicate line to walk.

For example, I enjoy Spanish cinema enough to understand that the scars from the Spanish Civil War (1936-1939) still linger. Even if prologues, like the one for The Last Circus, do nothing for me emotionally, I know that they are important to the context from the filmmaker’s point of view.

I imagine people in other countries feel similarly about American films that focus on the Vietnam War.

The filmmaker has to create a rich, interesting, world; and has to throw open the doors to that world for the audience. The audience has to be ready and willing to walk through those doors.

Unfortunately, Little Big Soldier whips through historical context with a quick voice-over and some maps, and then drops us into the aftermath of a battle, on a warm, sunny, day.

Clearly, Jackie (who wrote and produced) and Sheng Ding (who directed) are going for the kind of bleak, bloody, antiwar imagery of many samurai movies, but they can’t pull it off. 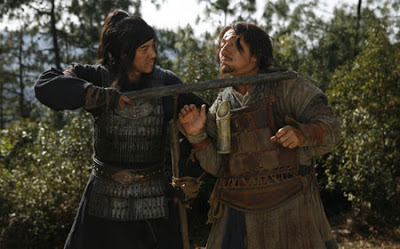 After that it’s a muddle of faction and inter-family rivalries, and we just don’t care.

You can make existentialist melodrama with characters like that, but that calls for strong imagery, powerful ideas, and an unrelenting plot. Little Big Soldier doesn’t have any of those. 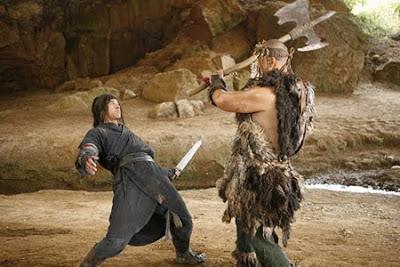 It tries to grapple with the futility of war, but because we don’t care about the characters or the context, the struggle with the issue is just dialogue. We don’t care.

It’s been done before, and better.

Conclusion
Harshing on Jackie Chan feels like I’m stomping on part of my own soul, so let me say this: Little Big Soldier has excellent locations, sets, costumes, acting, and cinematography. It’s not some cheap piece of grindhouse crap.

That said, I tuned out after about 30 minutes, and couldn’t be bothered to pay attention again until the closing credits, when they ran outtakes.