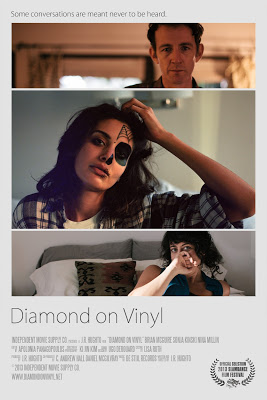 The new film from writer/director/producer J.R. Hughto Diamond on Vinyl is a well-crafted exploration of personal attraction and motivation in our age of smart phones and internet video.  But it’s also a story of obsession over a fairly obscure object – Safe and Sound, Volume 4, a rare vinyl recording of “conversations” meant to be played on repeat by home owners while out of the house.

For the film’s audiophile protagonist, Henry, the record appears to have been life changing, to the extent that recording conversations (mostly unbeknownst to others) becomes his lifeblood. Normal and rational social interaction seems to escape Henry, and it clearly starts to take a toll on his relationship with his girlfriend Beth.

Adding to the creep out factor is the unescapable fact that we, the audience, watch the story as voyeurs too.  Everything in the film is designed to make the point.  The script unfolds in chronological order, the acting is natural and instinctive and the camera work (mostly handheld, single camera) often focuses on one character at a time.  This isn’t another “found footage” Vérité thriller.  It’s an uncomfortable dramatic movie that earns your interest and ultimately your respect for unfolding its secrets carefully.

The film is wise to focus its camera on the phenomenal Sonja Kinski as Charlie, the wandering waif that stumbles into Henry and Beth’s lives.  Always a mystery, her character keeps you guessing what her true intentions are, and Kinski is to credit with this.  The young actress uses her sex appeal, and especially her eyes, to subtly distract and tease, and it ultimately becomes the driving force of the film.  Charlie is set up as the match to Henry’s audio voyeurism habits, but you never truly solve the underlying question of what motivates her, and that’s a good thing.


Like sex, lies and videotape, The Conversation, or even Blow-Out, Diamond on Vinyl keeps its voyeurs quirky and removed from the seemingly normal world around them.  Henry and Charlie are outsiders, clearly fascinated more by playback of captured audio, and ultimately reenacting those recordings, than being in the moments of conversation themselves.  They are as unlikable and familiar as anyone you know, perhaps even yourself.
DIAMOND ON VINYL is currently screening as an official selection of this year’s Slamdance Film Festival. You can follow its future screenings on the film’s official website here.
______________________________
BONUS FACT:
Back in 2007, WFMU’s Beware of the Blog unearthed the real-life PLAY IT SAFE! Volume 4 vinyl and currently has an audio sample.  Check it out here.