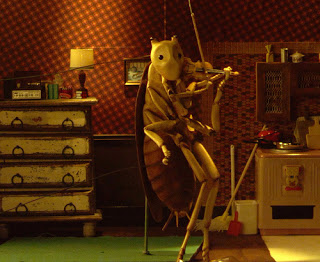 Josephine and The Roach is a strange and beautiful little film by Jonathan Langager, about a friendship between the lonely young Josephine (Jenna Augen) and a kind, clever, sophisticated cockroach.

The film itself made me think of Amelie – perhaps because of the faded, dream-like lighting, and gorgeous cinematography (directed by Damian Horan); perhaps because of the music (composed and conducted by Daniel James Chan) – the music has a Yann Tiersen quality to it, and it doesn’t hurt that there is an accordion involved. The story is a bit Kafka-esque – I swore I’d never say that, about anything, but how can I help it, when there is a cockroach involved? (Although in this story, the cockroach turns into a human…sort of.) There is also a hint of Roald Dahl – Josephine could be seen as a grown-up Matilda; the cockroach reminds me of the insects in James and the Giant Peach.

I recommend Josephine and The Roach to anyone who likes accordion music, or who likes some weirdness mixed in with their whimsy – and to anyone who enjoys a well-told story.

In this article:Movie Review, Slamdance, Written by Jessie Lynn