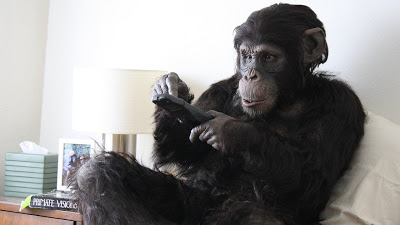 Mayeri’s short film was constructed as a study of chimpanzees in captivity watching a movie made specifically for them starring human actors in chimp suits (and capturing the real chimps reactions to what they are watching).

Sounds odd I know, but apparently chimps, who have been kept in zoos and other facilities, voluntarily watch television and movies as a way to pass the time (just like we do) and, judging by their response to the film within the film, seem to find programming catered specifically to them fascinating.

The premise of the “Primate Cinema” that captured the attention of the chimps (in a few cinema verite-like moments) was kept pretty simple: a chimp named Karla has to deal with a home invasion-style break-in of a group of unknown-to-her chimpanzees who proceed to wreck her home before becoming her friends, but it is the reactions to what is appearing on the screen (a television was kept outside and in an enclosed cage for the chimps to watch) which really puts it into the level of Meta.

Are the chimps merely mimicking the actions what they see on screen (while being captured by cameras themselves) or are they being influenced on some level by the actors portraying chimps? And, if that’s the case, could there be a real argument on what cinema and television are capable of manipulating in human beings as well (are we mimicking what we see or is what we see mimicking us?)

It is truly a fascinating study and one hell of a short film and definitely worth your time once it’s available for public consumption.