For more than 10 years now, fantasy film fans have been feasting at a smorgasbord.  Scarcely a month seems to pass without the release of a colorful CGI fantasy film set in a magical Medieval or mythic past.  It’s a wonderful time for us fans, but let us not forget an earlier era, another time and place, a span of just five years in which – literally – hundreds of fantasy films were produced for eager audiences.

The first of these “sword-and-sandal” pictures (known as “pepla” pictures in Italian, “peplum” for the singular) were set in classical Greece or Rome, but many later ones were set in fantasylands like Atlantis or Metropolis, where magic mixed with technology in Michael Moorcock style.  The obvious inspirations for pepla were American drama-epics like The Ten Commandments (1956) or Spartacus (1960).  Some bigger-budget pepla like Last Days of Pompeii (1959) tried to become drama-epics in the American vein.  But the more typical – and more fun – pepla had a different mode.

Instead of trying to move us with profound drama steeped in history, most pepla tried to excite us with lavish sensuality steeped in fantasy.  The appeal is visceral.  Some fans have likened the greatest pepla to beauty contests whose main purpose is to showcase gorgeous male and female bodies wearing as little clothing as possible.  The heroes are simple musclemen – played by bodybuilders – who rarely wear shirts.  The heroines are simple maidens arrayed in colorful dresses.  The villains are scheming aristocrats.  The villainesses are evil queens and princesses who brew love potions and perform sexy dances.

Alongside the displayed bodies are other sensuous appeals: verdant landscapes, towering sets, and physical combat (including gore).  Character development and court intrigue are minimized.  Cinematic stylization is almost non-existent.  Pacing is slow.  Fifty years after these films were made, we can still enjoy the beauty and the action – if we permit a little silliness and camp into the mix.

The second article comes from Timothy Young on his Mondo Esoterica website, posted 2011.  Young defines the subgenre as I do, with emphasis on “musclebound fantasy hero films.”  His article is systematic and easy to follow.  Check out his brief history of the subgrene, and note how his list dovetails with Bankston’s and with my own.

Now I’d like to recommend 12 good pepla, but first I’d like to mention 10 prominent pepla patterns.  Enjoy these patterns as you enjoy the movies.

1. CITIES ARE EVIL
Civilization and sophistication are associated with corruption and selfishness.  By contrast, rural peasant folk are sensitive and sincere.

2. TESTS OF STRENGTH
Some pepla heroes can think and plan, but most simply use brute force to save the day.  Watch for arena contests where the hero must prove his strength.

3. TORTURE SCENES
Some tortures are extreme tests of strength.  Other tortures depict our heroes and heroines chained, whipped, stretched, and sometimes scarred or burned.

4. SEXY DANCES
An evil (but often sympathetic) queen or princess may perform a dance.  Or a dozen sexy ladies may perform at court to amuse a decadent king.  In some pepla, 60s pop music accompanies the dances!

5. LIONS
Don’t be surprised when our hero is attacked by one or more lions in the course of his quest.  Often, he will strangle a lion to prove his strength.

6. CHEAP MONSTERS
A monster may appear at the climax, but it will probably look shoddy and fake.  Hopefully it will look funny.

7. WATERFALLS AND CAVES
If you watch enough of these movies, you’ll start to see the same falls and caves over and over.  Symbolically, waterfalls are associated with love, while entering a cave could mean a journey into the subconscious.

8. SECRET PASSAGES
Caves often harbor secret passages.  So do the fortresses and palaces to which our intrepid heroes must gain entrance.

10. CLIMACTIC NATURAL DISASTERS
That tall tower you’ve been admiring for 90 minutes now?  That impregnable fortress?  That mighty statue?  Don’t get too attached to it, since there’s a good chance that an earthquake/flood/hurricane/eruption will crush it to pieces before our story is out.

So here are my 12 recommendations.  I’ve written more extensively on each of these pictures in my Claws & Saucers guidebook, but I hope you’ll enjoy my brief descriptions below. 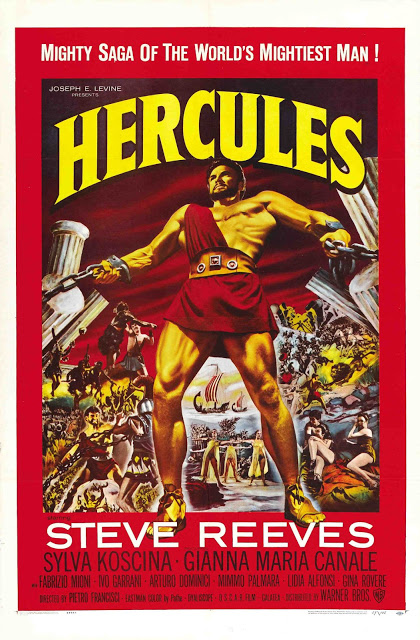 You should start with Hercules if only because it was the first “real” entry into the subgenre, the one that started it all.  But, I swear, you’ll be best off if you mute the sound and substitute some 60s psychedelic rock or 70s prog rock on your stereo.  The story is dull and without surprises, and the main appeal is visual.  So enjoy your music while you enjoy the shirtless performance that made Steve Reeves a star.  Reeves first appeared in Jail Bait (1954), directed by Ed Wood! 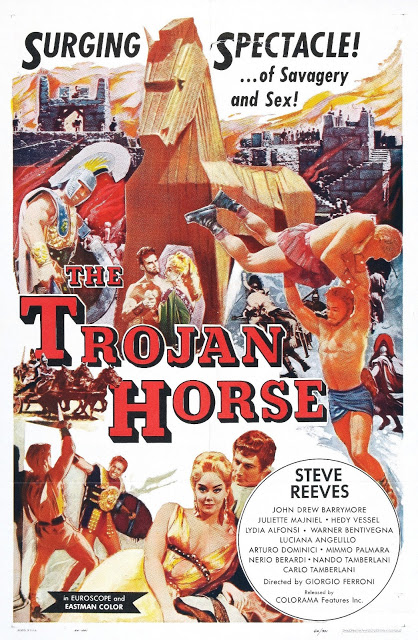 After Hercules, you should watch Steve Reeves again in the mostly realistic Trojan Horse.  All the battles are stiffly shot, but the armies on screen are massive.  Helen of Troy wears an array of stunning dresses.  Despite a near absence of style, The Trojan Horse achieves a sense of tragedy that is all too rare among pepla. 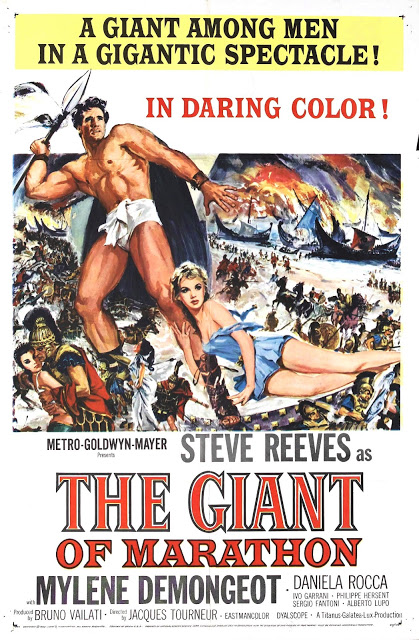 Some other Reeves movies have more action, but if you define pepla in terms of beautiful bodies, then The Giant of Marathon is the most pure.  It’s certainly the most revealing, as Reeves spends large stretches of screen time wearing only a white loincloth.  At the climax, he leads a troop of loincloth-clad swimmers in an assault on an enemy flagship! 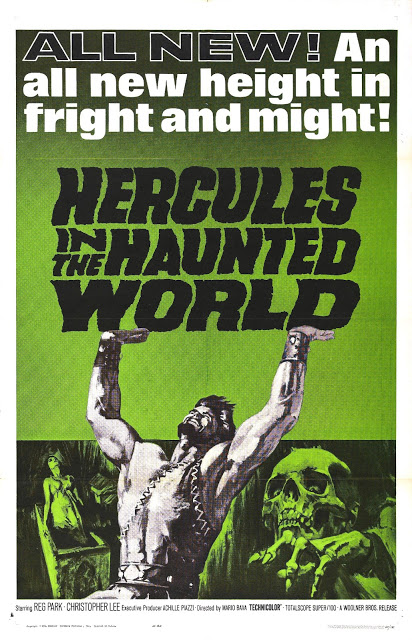 After Reeves, bodybuilder Reg Park is the actor most associated with the Hercules role.  Here he stars in the most stylized and most popular of all sword-and-sandal films.  Cinematographer-director Mario Bava worked on several pepla, but he did his most complete work on Haunted World.  Bava’s trademark colored lighting and in-camera special effects give a surreal allure to the labyrinthine underworld.  In a small (and dubbed) role you’ll find Christopher Lee! 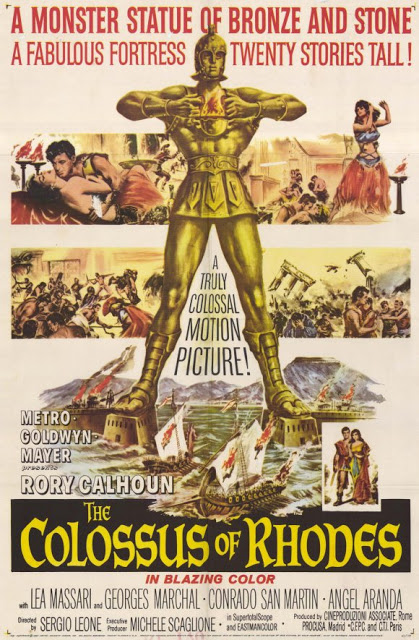 If The Haunted World isn’t the best of all pepla, perhaps The Colossus of Rhodes should take that honor.  This was Sergio Leone‘s lone entry in the subgenre before Leone pioneered the “Spaghetti Western” a few years later (incidentally, it was these Westerns that would completely replace pepla by 1965).  Speaking of Westerns, Rory Calhoun plays our hero.  Since Calhoun is no bodybuilder, he is more intelligent and resourceful than the typical peplum hero. 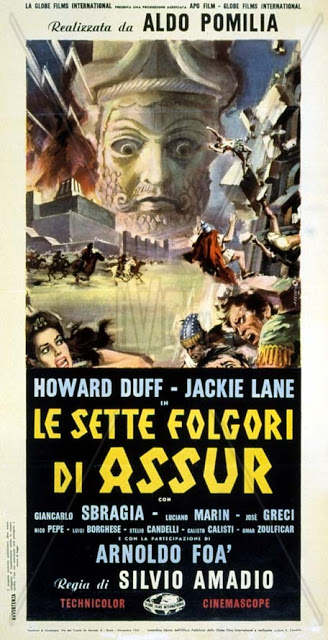 At first I hesitated to include this one, since it’s more of a realistic drama than a fantasy peplum, but the drama is so interesting, and the sets are so grand and convincing, that I’m sure most fans will enjoy it.  Be patient through the slow start and wait for the buildup.  As with The Colossus of Rhodes, the characters show some complexity, which is something very rare in any peplum.  The climactic flood is one of the best ever filmed.

Because of its title, War Gods is currently sold as a double feature with an exploitation pseudo-peplum from the 70s called War Goddess (a fun movie, but totally different from The War Gods): 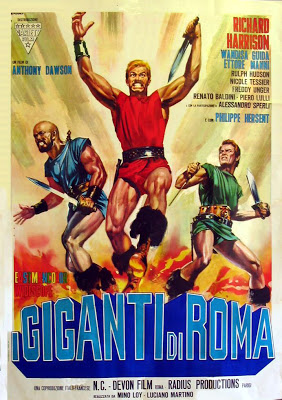 Here’s another realistic peplum, but a pulpy one filled with hard-hitting action.  Instead of one shirtless bodybuilder hero, we get four – each with his own skills and weapons – on a secret mission to destroy an enemy catapult.  It’s fast and firm, with little or none of the romance or politics that often bog a peplum down. 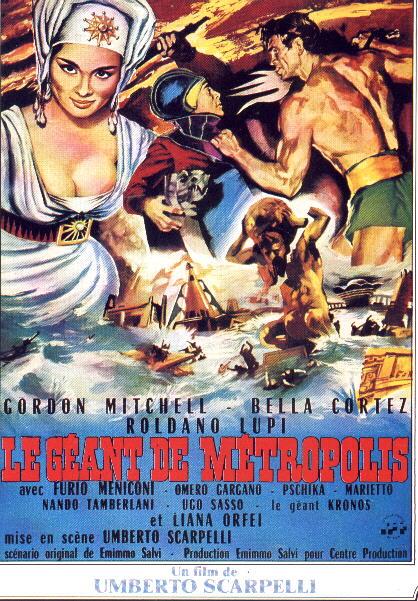 Fans remain divided on whether this is a “real” peplum or some kind of surreal sci-fi horror film.  Bankston in his article mentions it only in passing.  Bodybuilder Gordon Mitchell (who later became a decent painter!) plays the shirtless hero, imprisoned in a dark twisted corrupt city-state ruled by sinister scientists.  It’s set 20,000 years in the past.  I think it’s a masterpiece, being equally disturbing and fascinating start to finish. 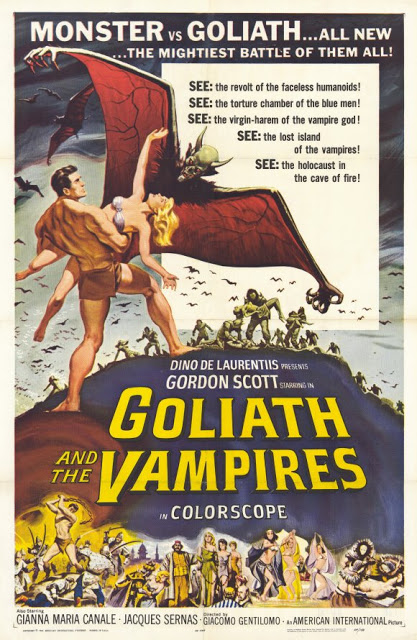 For fans who find other pepla too light and sweet, check out this weird horror-pepla, where all the action comes with a harshness bordering on sadism.  Gordon Scott – most famous for playing Tarzan – has shoulders nearly as broad as Steve Reeves.  Bankston thinks that Scott might be the best peplum star of all.

One of the last and one of the silliest of all pepla, this sci-fi romp sticks our shirtless hero into an Atlantean encampment in the middle of a desert.  Some Atlanteans have gold skin or blue beards.  Before appearing in a dozen pepla, bodybuilder Kirk Morris (Adriano Bellini) was a gondolier! 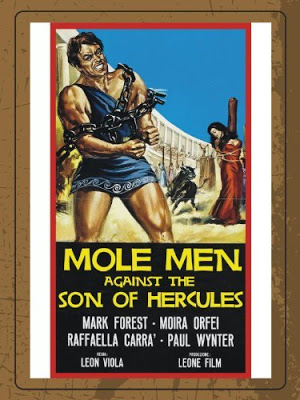 Though bodybuilder Mark Forest lacked the incredible shoulders and torso of Steve Reeves, he is often a pepla fan favorite.  He seems natural rather than stiff on screen.  Almost the whole movie is set underground in the Lost World of the mole men and (of course) their beautiful evil queen. 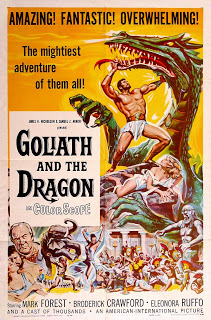 Some of the funniest cheap monsters can be found in this one.  The dragon looks like a toy.  Half hackneyed, half imaginative, this fantasy peplum is a perfect way to wind up our 12-film excursion into the subgenre.  Mark Forest is the hero – and you can’t help rooting for him, or the movie, from the get-go.

If you enjoyed these dozen pepla, you can find dozens of others within easy reach.  Just make sure to find the best prints – and the widescreen versions – whenever possible.