Comic books are a mixed bag. Some are good while others are not so good, and then there are those that make you proud to be a fan of the genre. Besides being uber talented, it’s hard to fathom how Francesco Francavilla produced such an outstanding read.

This is a crime/noir story of the past where mob bosses rule Colt City with an iron fist. Francavilla reveals some information about the Beetle’s character but we don’t know much about the man behind the mask. The sense of overall adventure captivates you from beginning to end.

Francavilla’s art has a retro look that enhances the pulp nature of this grand mystery.

There is one panel in particular where the Black Beetle is flying through the air where the cut of his cape, flowing in the wind, makes him look like an actual beetle.

The style of Nate Piekos’ lettering was the extra cherry on top that made you feel you were reading a comic strip from the past. There is something to say about a comic that is shaped by one person. Not everyone can do it, but those who can are able to create something special.

Francesco Francavilla is in a league of his own and anyone who is looking for something different will thoroughly enjoy the work of this Eisner-award winning talent.

In many ways, Captain Marvel is the embodiment of everything a comic book should be.

Strong visuals from Filipe Andrade and the superb storytelling of Kelly Sue DeConnick pains Carol Danvers in a magnificent light that is hard to ignore.

Most superheroes don’t have a life outside of the cape and cowl, no matter how hard they try. Carol Danvers, however, does and DeConnick gives readers a look into her private life. Her regularly scheduled program of daily errands is interrupted by Tony Stark as he hacks into her personal calendar and moves a few things around so a favor can be done.

Carol gets an early start on her day to fit everything in until two Dinosaurs appear out of nowhere and tear up downtown Manhattan. Some hilarity ensues before the Dino beat down begins as Carol convinces a cab driver to take her cat Chewie to the vet by telling him the cat is working under cover for the Avengers.

Jordie Bellaire‘s coloring is some of the best you will see this week and it perfectly complements Andrade’s illustrations.

All in all, this has something for everyone with a personal touch that hits the mark in every avenue. 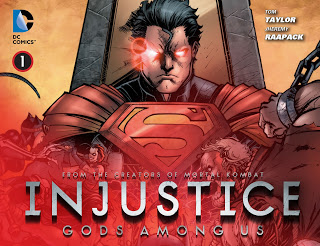 “Injustice: Gods Among Us” is one of the most anticipated video games of 2013. The games plot is centered on the superhero versus superhero saga in the midst a new world order.

This weekly digital release is a prequel that takes place five years before the events in the game.

Normally, I’m not a fan of promotional comics, but Tom Taylor takes the gloves off with an emotionally charged narrative that would not be allowed in regular continuity. All is right with the world and Superman has never been happier. Of course, Gotham City’s finest villains come to Metropolis and begin to set things in motion that ultimately leads down a path not even they will see coming. If you have read this column in the past, you know I’m a big Superman guy. Taylor’s direction with the Man of Steel is reminiscent of the big blue Boy Scout we all grew up on with his new school costume.

According to the trailers and other promotional material released so far, Superman goes rogue in some way, shape, or form. His current “New 52” character is kind of an asshole so becoming a bad guy wouldn’t give you that “oh my God” moment. If the guy who stands for truth, justice and the American way turns to the dark side, then that is a plot point you can sink your teeth into. For 0.99¢ an issue, this comic is a deal you don’t want to miss.

Ever since Doctor Octopus took over Peter Parker’s body, we’ve all wondered how long can he keep up the charade?

A bigger question is, can he keep it a secret from someone with Daredevil’s abilities?

Daredevil and Spider-Man team up almost as often as Batman and Robin so to say they know each other is an understatement. We all knew before this issue was printed the big reveal is not going to happen so soon.

Mark Waid realizes this and produced an entertaining story about how Daredevil is thrown off by Spider-Ock’s change in personality.

Of course, this all happens while the duo is battling the new and improved Stilt-Man. Chris Samnee’s art delightfully illustrates all of the key moments including a bone breaking affair involving one of our heroes.

This issue was very fun roller-coaster ride that suddenly ends on a sad note.

Scott Snyder’s voice on Batman during the inception of DC Comics New 52 has been one of pain and tragedy.

At every turn, enemies of the Dark Knight not only want him dead, but also want to break his spirit. The seedy underbelly of Arkham Asylum knows no bounds as to how evil and vile of a place it can be. “Death of the Family” examines the unique relationship of the Bat-Family. Most of Gotham’s villainous scum could never make the Bat tremble due to respect or trepidation on their part.

Those emotions are out the window when it comes to The Joker.

Synder perfectly gets this point across as he forces the Caped Crusader to fight through the man traps he has set throughout the asylum.

The illustration of these moments captures the horror Snyder is trying to get across.

We know Batman is one tough hombre, but how can one overcome such insurmountable odds in the face of terrifying chaos? It takes clever creators to work on Batman. Scott Snyder and company have set the bar extremely high for anyone who may work on this coveted character in the future.

Oh, did I forget to mention the book’s electrifying ending?

Oh, I didn’t? Well, I’m not going to spoil it because it would ruin a fantastic reading experience.

Speaking as someone who got picked as a kid, it is easy to empathize with Todd.

According to writer Ken Kristensen, he is the ugliest kid in the world. Supposedly, he is so ugly, wearing a paper bag over his head is routine. Todd is very sympathetic and you can’t help but like him right away. This makes you feel for him as everything in his life is ugly. His father is a drunk, his mother just doesn’t like him, he gets bullied to the extreme on a regular basis, and it is the status quo to simply not to like him.

This is not completely as depressing as it sounds. The ridiculousness of it all makes you want to laugh and cry at the same time.

The characters are cartoony and have a lot of ugly qualities which only gets worse as they yell at poor Todd for something he didn’t do. In a way, I think the irony of it all it what makes this book shine.

Todd just wants things to be alright and despite the enormous amount of adversity he has faced and will face in upcoming issues, he seems like the kind of kid who will never give up being himself.

This was a great first issue and I hope this series has a lot in store for comic book fans. While watching Todd being a victim of the preposterous can be entertaining, at some point, Todd will have to get his just due.

Wolverine is trapped in the Savage Land and he has no choice but to adhere to the law of the jungle in order to survive.

How much of a savage does Wolverine need to be, do you ask?

Well, the kind that stabs dinosaurs in the throat, that’s how. While this wasn’t as good as Jason Aaron’s work with the character, Frank Cho’s take is still refreshing as he is clearly going for a different approach.

If you don’t like the story then you will have no complaints about his artwork.

His storytelling is steady throughout the book in both art and dialog as Wolverine’s narrative highlights the dangers of the “Savage Land.”

All New X-Men #6 (Marvel Comics)
The young Jean Grey is starting to come to terms with what her future holds while the young Scott Summers had a different idea in mind.

Saga #9 (Image Comics)
A little change in pace for this series as The Will is the focus of this issue.

Captain America #3 (Marvel Comics)
It doesn’t matter if the fight is in Brooklyn or Dimension Z, Steve Rogers will never give up.