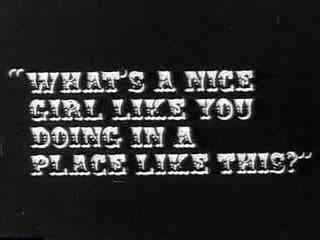 Student films tend to be a conglomeration of every cliche known to art house film making…close-ups of roaches, over-processed shots of women putting on lipstick, John Woo Doves…you name it, it’s been in a student film.

But that doesn’t mean their suckiness isn’t enjoyable, especially when the beginning efforts show off a style that will ultimately become a trademark structure that we know and love from a beloved filmmaker.

And Martin Scorsese‘s 1963 short film What’s A Nice Girl Like You Doing In A Place Like This (shot when he was attending NYU’s Tisch School of the Arts) certainly shows off what the young man was going to be capable of in the next few years with films like Who’s That Knocking On My Door (starring a very young Harvey Keitel)  which would go on to win 1968 Chicago Film Festival, Boxcar Bertha and, of course, Mean Streets.


So take comfort student filmmakers (and those forced to sit through those films) there’s hope that your craptastic short student movies will one day be worshiped like the portents they are.

In this article:Celebrity/Gossip, Short Film, Watch This