At the end credits for the tenth Bond film, The Spy Who Loved Me, there was the usual little teaser for the next Bond installment, which in this case promised eager 007 fans that, “James Bond will return in For Your Eyes Only.”

But it lied. The next Bond movie was not For Your Eyes Only—it was Moonraker.

What could possibly have happened to cause the producers of the most successful film franchise in history to scrap the scheduled release of their next guaranteed blockbuster?

Especially since they weren’t exactly reinventing the wheel, just swapping one paint-by-numbers Bond script for another.

And why Moonraker, of all things?

Ian Fleming’s Moonraker was one of the least memorable Bond stories, a bland blend of Space Race anxiety and Cold War paranoia, centering around the rather quaint superweapon du jour: a hijacked nuclear missile.  Yawn.

The best thing about it was the vaguely sinister name of its villain, Hugo Drax.

Nuclear terrorism was old news for the Bond series; in fact, it was pretty much the standard plot device going all the way back to the first film, Dr. No.  So what happened that caused Moonraker to be rushed into production?

In the summer of 1977, Star Wars mania swept the globe, causing every production company in Hollywood and beyond to scramble for backlogged science-fiction projects it could promote as “kind of like Star Wars.” 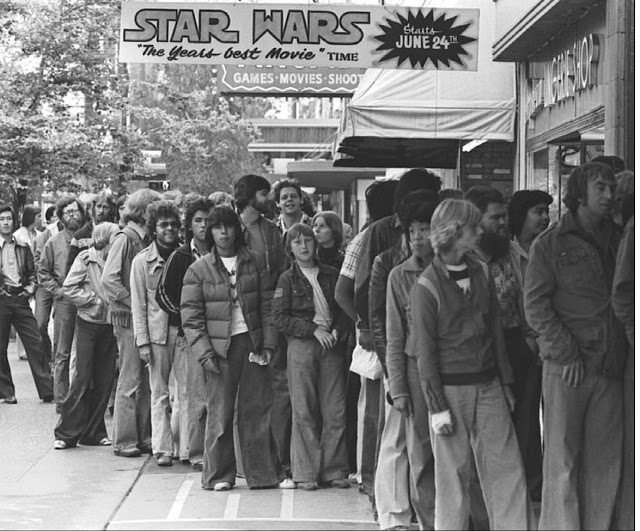 Some of these were great, such as Ridley Scott’s Alien.  Others were more rankly exploitative, such the original Battlestar Galactica, or Disney’s abysmal The Black Hole.

Then there was Moonraker—otherwise known as “Bond in Space.” 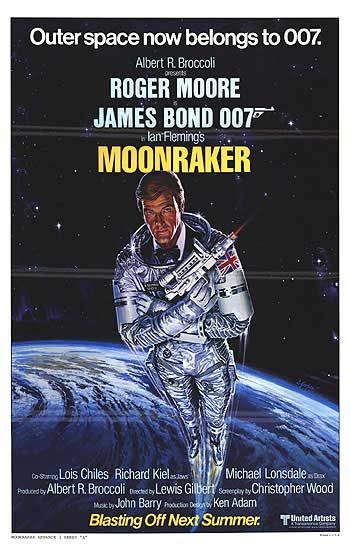 I should say here that as a kid in the throes of Star Wars fever, I kind of liked Moonraker.  Sure, it was schlocky and ridiculous (biggest WTF moment: a gondola becomes a hovercraft, causing a pigeon to do a double-take), but as Bond movies went, at least it wasn’t boring.

Some of it was actually pretty cool, like the spectacular skydiving stunt that opens the movie (arguably the best opening scene in the entire series), or the surprisingly realistic shuttle launch sequences, which predated the maiden voyage of the real Space Shuttle.

Even the overfamiliar trope of the BIG FINAL BATTLE, already given epic treatment in You Only Live Twice, Thunderball, and The Spy Who Loved Me, was successfully recycled by putting the combatants in space suits and having them puncture each other with laser beams.

At the showing I attended in 1979, I still remember the audience going wild at the sight of armed spacemen floating into action, as if we couldn’t believe what we were seeing…but loved every minute of it.  Zero-G combat—sweet!  The makers of Moonraker were smart enough to realize that if you’re going to put James Bond in outer space, don’t be half-assed about it—send in the Marines, too!

But that penchant for crowd-pleasing excess is also Moonraker’s biggest problem:  the whole movie is a joke.  Expensive thrills are one thing, cheap gags are another.

There has always been comedy in James Bond, little moments that go way over the top, such as the laser beam that almost gelds 007 in Goldfinger.  But Moonraker totally morphs into a Pink Panther film:  Whose idea was the cartoonish romance between hulking assassin Jaws (Richard Kiel) and…Pippi Longstocking?

Farce is not conducive to tension; with every dumb laugh the stakes get lower, which is a shame because it would be nice to care whether the world is destroyed or not.  Moonraker sacrifices its dark side for a big fat slice of green cheese.  Which is not to say that James Bond movies must be Deadly Serious—just that they should not devolve into self-parody.

Thankfully, Moonraker was not the beginning of a trend.  It was an amusing freak, a wacky interruption in the normal order of things.  A bastard stepchild of Star Wars.

James Bond finally did return in For Your Eyes Only.  And it was good.

Walter Greatshell is the author of the Xombies trilogy of novels, and the thriller Mad Skills, published by Ace Books.  He is also the author of Enormity (under the name W.G. Marshall), and Terminal Island, both published by Night Shade Books.