Jeff Santo, the phenomenal filmmaker known for his documentaries This Old Cub and Off The Boulevard, returns to the camera with a love letter to motorcycle clubs.

The film, Dead In 5 Heartbeats adapts the novel of the same name which was published in 2004 and written by Sonny Barger, a a founding member of the Hells Angels.  Released  several years before the similarly themed television series, Sons of Anarchy aired, both the book and the film are certainly less soapy and episodic than Sons, diving head first into the world of motorcycle club rivalry and that ties that always keep those clubs together. 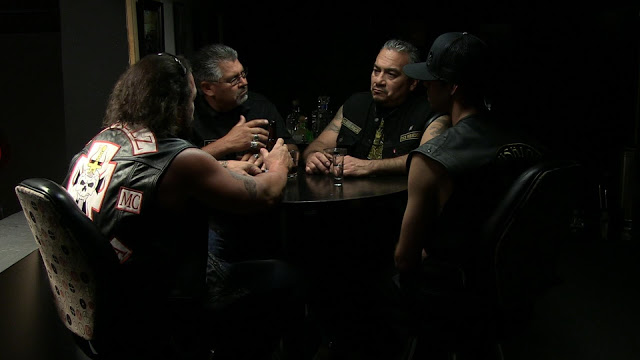 Heartbeats stars actor Jeff Black as Patch Kinkade, a member of The Infidelz motorcycle club that leaves his chapter in California for easier living in Arizona.  Paradise is short lived when a member of The Infidelz is murdered in cold blood outside of a hangout that saw every motorcycle club in the area partying at back in California.  Chapter president Ahab (Robert “Chico” Mora) drives all night to retrieve Patch and bring him back to a club that is looking to him for leadership. 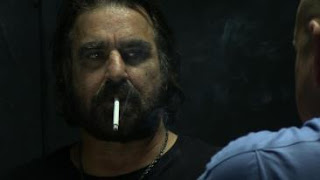 On the opposite side is Angelo Timmons (David Della Rocco), a thirty year veteran of the club who is having money problems.  With bills to pay, Angelo makes the decision to go outside the club, make a huge drug deal, and try to gather enough money to kiss his problems goodbye.  The plan doesn’t go as expected and when Angelo is picked up by the feds he has to make the tough decision of ratting on his family at the motorcycle club or going off to federal prison.

The film weaves the tales of the two men together as one looks to find out who murdered his brethren and one who is just looking to survive.  When the two cross paths with each other and the different motorcycle clubs there is a feeling that the time bomb has long started to tick away.

Easily the most amazing quality of Dead in 5 Heartbeats is the realism.  That is achieved by most of the clubs being played by actual Arizona motorcycle clubs like The Hooligans, Alma, and The Rollin Knights.  Even most of The Infidelz were played by actual Hells Angels members, this film being the first time they’ve acted in a production.  While they might not be the most polished actors in the world, the fact that they are actual Hells Angels lets you realize they don’t act for the fun of it.  They are acting out portions of their life.  The fact that the curtain is pulled away by showing these motorcycle clubs in their actual environments adds a plethora of realism unseen in most films. 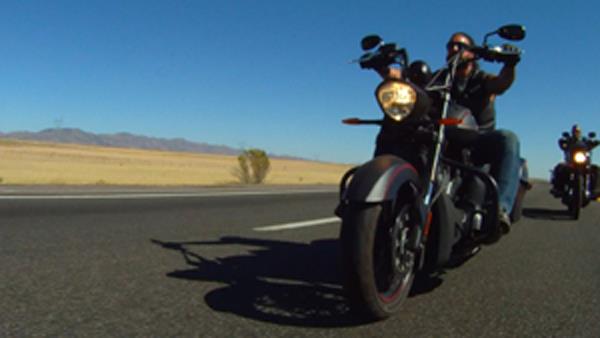 The film’s shining star is David Della Rocco, best known for playing Rocco in The Boondock Saints, who gives another fantastic performance in the role of Angelo.  Rocco, a veteran with performances in other Santo films like Jake’s Corner and Off the Boulevard, has no need to steal the show as he can, he gives a nuanced performance as the father who just wants to be able to pay his bills and provide for his son.

While the indie film lacks a slick Hollywood production look, Dead in 5 Heartbeats delivers a knockout punch to the genre with a far more interesting look at motorcycle clubs than Sons of Anarchy or anything else similar.  Having Sonny Barger producing from his own adaptation certainly helps while the rugged look of the “actors” envelops you into the motorcycle club lifestyle fully.  Dead in 5 Heartbeats is a 1-2 punch that even the most novice motorcycle enthusiast can truly enjoy.

For more information, check out the website at DeadIn5Heartbeats.com.