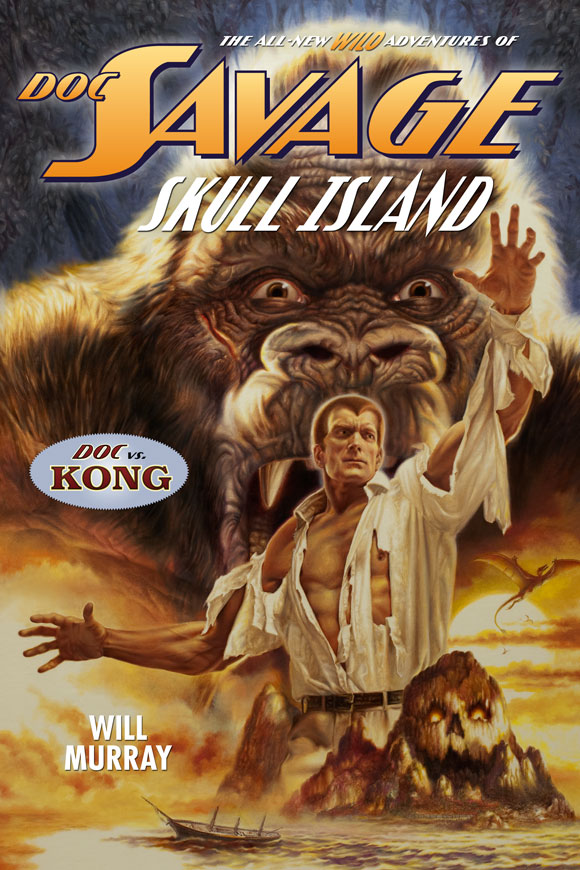 Eighty years ago in February, 1933 the Street & Smith company released the first issue of Doc Savage Magazine, introducing one of the most popular
and influential pulp superheroes ever to hit the American scene. Doc
Savage was the greatest adventurerand scientist of his era, and while
his magazine ended in 1949, he influenced the creators of Superman,
Batman, Star Trek, The Man from U.N.C.L.E. and the Marvel Universe—to name
only a few.

While that first issue of Doc Savage was fresh on Depression
newsstands, RKO Radio Pictures released one of the most important
fantasy films of all time. Everyone  knows the story of how King Kong
was discovered on Skull Island and hauled back to New York in chains,
only to perish tragically atop the world’s tallest  skyscraper, the
Empire State Building.

As it happened, that was where Doc Savage had his world
headquarters. For decades, fans have wondered: Where was Doc the day
Kong fell?

The story opens when Doc returns from his secret retreat in the North Pole to discover the cold corpse of Kong lying on his doorstep.

“I know this creature,” Doc tells his dumbfounded men.

Tasked to dispose of the remains, the Man of Bronze then relates
the untold story of his epic encounter with Kong back in 1920, after
Doc returns from service in World War I, long before Kong became known
to the civilized world as “King” Kong.

Doc Savage: Skull Island is a multi-generational story in which
Doc and his father—the man who placed him in the hands of scientists who
made him into a superman—sail to the Indian Ocean in search of Doc’s
grandfather, the legendary Stormalong Savage, whose famous clipper ship
has been discovered floating, deserted, her masts snapped by some
incredible force.

The quest for Stormalong Savage leads to the fog-shrouded Indian Ocean and — Skull Island!  There, Doc Savage faces his first great test as he
encounters its prehistoric dangers and tangles with the towering,
unstoppable Kong.

“When Joe DeVito brought this idea to me,” says Will Murray, “I
knew it had to be written with reverence for both of these immortal
characters. So I used the locale of Skull Island to tell a larger story,
an untold origin for Doc Savage. It all started back on Skull Island….”

“Pulling off the first ever face-off between Doc Savage and King Kong was both challenging and exhilarating,” adds DeVito. “Will’s
unique take on the tale scatters the primordial mists
surrounding Skull Island long enough to reveal secrets of both classic
characters hidden since their creation.”

Doc Savage: Skull Island has already been hailed as “The Doc Savage novel that Doc fans have been waiting on for 80 years!”

Doc Savage: Skull Island is will be released in March, as the fifth
entry in Altus Press’ popular Wild Adventures of Doc Savage series.
Cover by Joe DeVito.