Well, after last week’s filler episode, where very little happened, in this episode everything happens.  Raylan heads to prison where he hopes to queer his father’s deal for early release by approaching another prisoner who might know who Drew Thompson is. This other prisoner responds by staging an attack on Arlo, and though Arlo gives almost as good as he gets, he takes a pair of barber shears to the chest.

Of course, the old bastard can’t die right away, and over the course of the episode Raylan’s daddy issues come to the fore at Arlo’s death bed.

Arlo’s last words to his son are “Kiss my ass.” 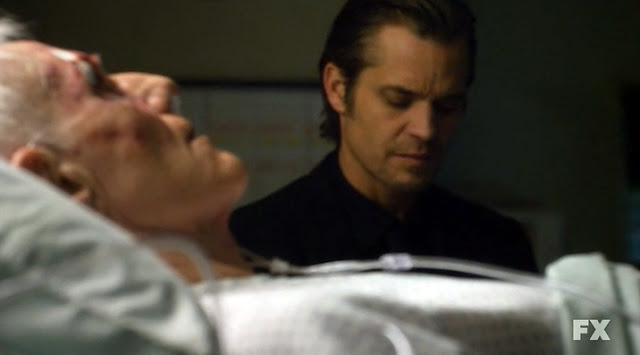 Then Arlo dies off screen, the next day.

Meanwhile, Boyd has been instructed to kill Frank Browning at the orders of the Harlan County business elite. Boyd offers Browning a counter deal, which the old man refuses.

Meanwhile meanwhile, Winn Duffy, under pressure from world’s biggest mobster Theo Tonnin, pressures Boyd on his efforts to hunt down Drew Thompson. Boyd, seeing an opportunity, sends Theo’s hitman after his enemies list. This pisses off Theo Tonin, but Boyd strikes a new deal, angling out Winn Duffy in the process. He also uses his newfound influence with Tonin to turn the tables on the Harlan County business elite, making him the de facto kingpin of Harlan County crime and a real mobster. 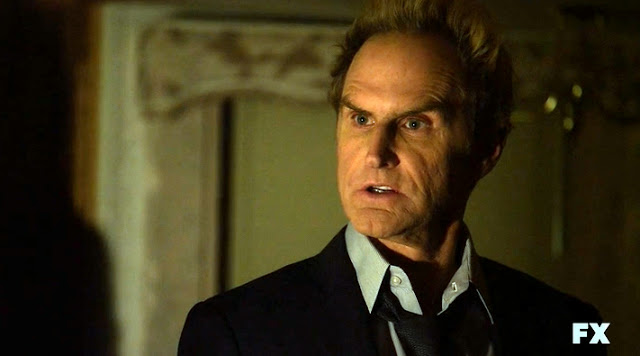 Johnny, Boyd’s henchman, has his own secret deal with Winn Duffy, which is probably going nowhere now, but unfortunately he’s preoccupied with messing around with Colt’s head. Colt is Boyd’s other heavy hitter, and since he lost Ellen May a few episodes back, rather than kill her, he’s been circling the drain. Johnny extorts Colton out of $20,000 he doesn’t have, so he kills a drug dealer for the money.

In the process, Colt also kills a friend of Raylan’s fellow Marshall Tim, which is sure to make things more difficult for everybody.

The episode ends with Raylan taking a few days to deal with the death of his father, but I doubt those few days will be easy for him.