One of the greatest guides to the concept of continuity in a specific series is The DisContinuity Guide: The Unofficial Doctor Who Companion by Paul Cornell, Martin Day and Keith Topping, first put out in 1995. From my point of view the genius of this work is in the way the authors peel back the layers of a complex text like Doctor Who, and start back at the beginning, when we didn’t know anything about the series or what it would eventually evolve into.

This allows us to see the ways in which the universe was expanded, sometimes carefully, often times not. We get to see undeveloped themes and the earliest examples of new themes.

Like an evolutionary biologist studying our small, brown furred burrowing human ancestors, we get a look at the way things were without the baggage of the way things are.

Last week we looked at Fantastic Four #4, which reintroduced the Sub-Mariner to comic readers, and effectively tied the continuity of the Fantastic Four to the Timely/Atlas comics of the 1940s and 50s. So let’s look at the first issue of Marvel Comics, and see the very first appearance of the Sub-Mariner! 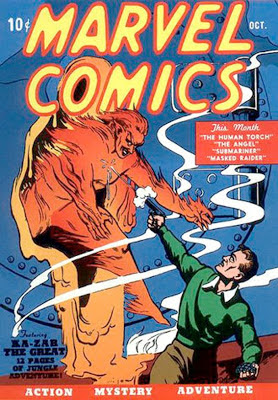 Publication Date/On Sale Date :
Oct 1939/Aug 31, 1939
Sources :
Superman in Action Comics #1, The Angel is like a superhero version of Simon Templar aka The Saint, Ka-Zar is adapted from a 1936 pulp magazine Ka-Zar, “Rime of the Ancient Mariner“, The Lone Ranger, Peter Pan, A Dweller on Two Planets

The Human Torch is a robot, built by Professor Horton, but he comes pre-equipped with a lot of cultural information. He understands that his flames can harm innocents, and does not want to hurt people. Though he is an innocent and easily fooled, he understands that Sardo, the villain of the piece, is a “low-down” racketeer. This is complex cultural knowledge, not easily programmed into a robot, in fact it is impossible, even today.

Professor Horton has built an exact replica of a human being, a synthetic man. But whenever the robot comes into contact with oxygen it bursts into flame. He calls his creation the Human Torch, and keeps him sealed in an airtight glass cylinder. 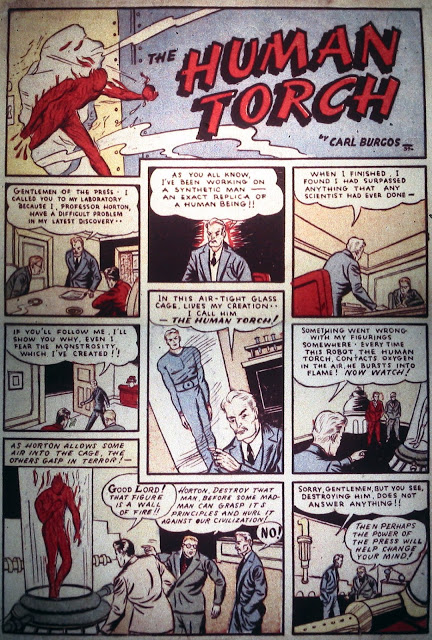 When measuring the heat of the Human Torch with a pyrometer, the hands go off the dials!
The Torch is pretty quick to burn gangsters to death, which is a grisly method of justice. But the accidental victims early on in the story are much more horrific. 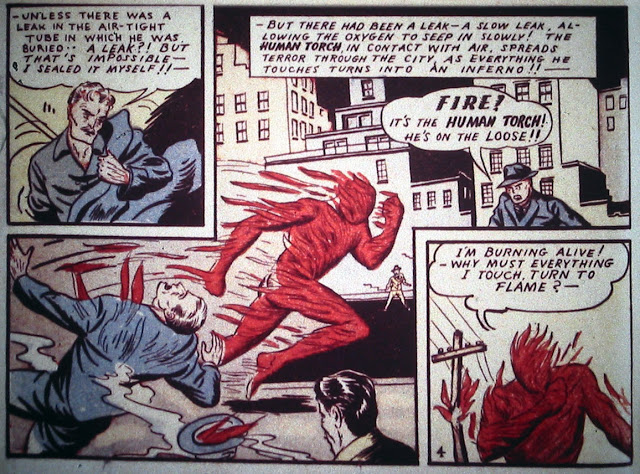 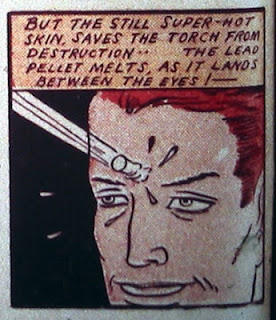 After the Torch gets his flames under control with the help of nitrogen, and clears his name of assorted legal charges, he is released into Professor Horton’s custody. Not wanting to be used for Horton’s monetary gain, the Torch decides to leave Horton and make his own way in the world. 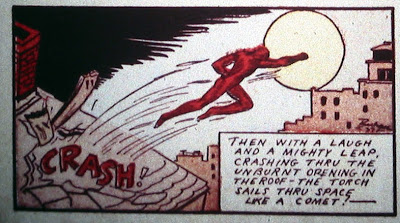 The Angel is a vicious vigilante. He doesn’t seem to have any superpowers. We learn nothing of his origin or motivations or private life. He’s a little bit like a 1940s Punisher. When he decides to go after the “Six Big Men” he doesn’t seek to arrest them, he kills them. He strangles Gus Ronson from the back seat of his car and he mashes Mike Malone into a pulp with his fists. John Dillon falls out a window trying to escape the Angel, and Steve Enkel and Trigger Bolo shoot each other during a melee. He smashes Dutch Hanson with a heavy wooden chair, sending him crashing into a fireplace. Oddly, when confronting the last two criminals, Dr. Lang and Lil, he lets them live and confess to the police. 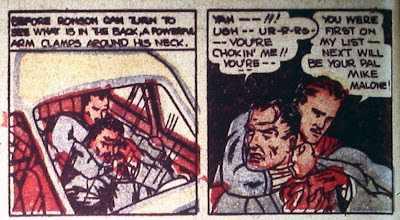 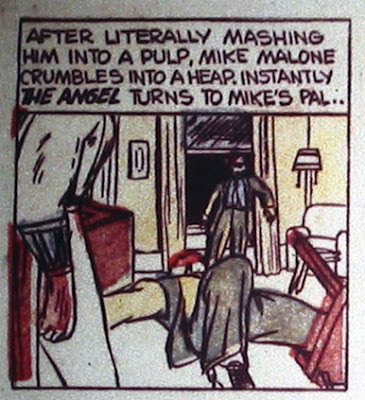 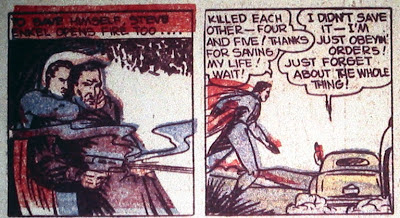 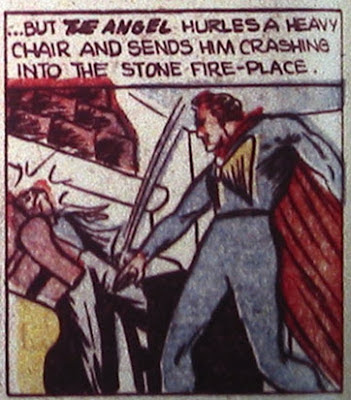 Continuity- The Sub-Mariner:
The Sub-Mariner is described as “an Ultra-Man of the deep” who “lives on land and in the sea… flies in the air… Has the strength of a thousand men… is a youth of dynamic personality… quick of thought and fast action…” 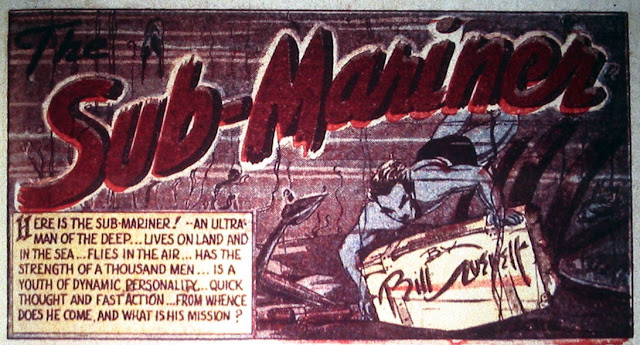 The story opens as Namor brutally murders two deep-sea divers and wrecks a salvage ship, the S.S. Recovery. He believed the deep-ea divers to be robots, but suffers no pangs of conscience when they are revealed to be Earth-Men. 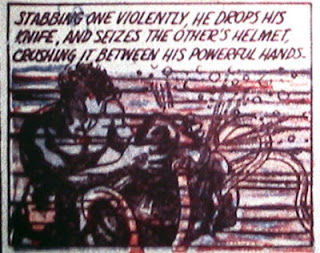 Namor’s origin is revealed by his mother, Fen. In 1920 an American ship called the Oracle was on a scientific mission near the South Pole, captained by Commander Leonard McKenzie. The Earth-Men conducted scientific experiments that demolished the undersea kingdom of Namor’s people. Namor’s mother is sent to spy on the Earth-Men, as she looks the most like an Earth woman among the undersea race. She is ordered to “work your feminine wiles to our racial advantage.” 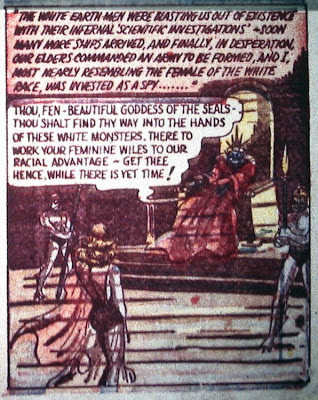 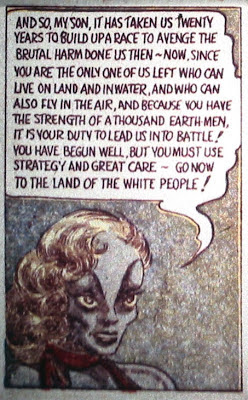 We meet Namor’s cousin, Dorma, a red headed sea-woman. Namor and Dorma decide to destroy a lighthouse so as to wreck ships. After wrecking the lighthouse Namor hijacks a biplane in midair, tossing the pilot to his doom. He tells Dorma to crash the plane and swim home.
In total, Namor murders three people directly, and causes the deaths of at least a dozen more. 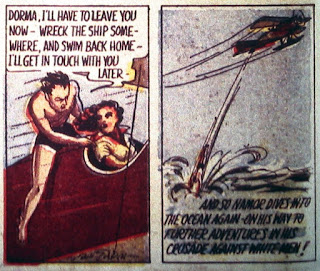 Though Namor is clearly royalty, there is a priest or leader of sorts that Namor answers to, a mysterious and ill-defined figure: 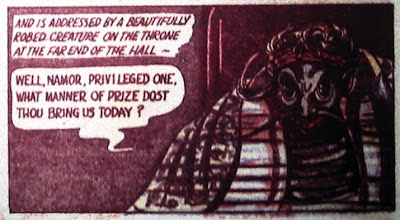 The story starts in Cactusville, where Cal Brunner, a ruthless rancher, is forcing smaller ranches to sell out to him. They go after Jim Gardley, who fights back. Brunner frames Gardley as a rustler, and has him locked up to be tried and hanged. Gardley escapes and finds a white horse he names Lightning. He wraps a black bandanna around his face and calls himself the Masked Raider. With the help of Sheriff Steve, the Masked Raider cleans up Brunner’s racket and continues his war on crime, western style. 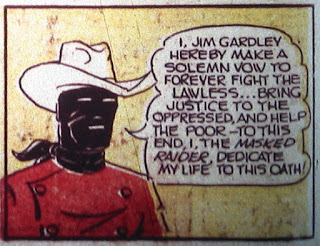 Links :
At one point Namor exclaims, “Holy Mother of Neptune!” Neptune is the Roman name for the God of the Sea, Poseidon. In Greek mythology his mother would be named Rhea.

An unnamed city, probably New York.
The ocean, Atlantis, unnamed
Cape Anna Lighthouse
Another city, or perhaps also New York. The Angel was last in Paris, but he’s come to America to take out the “Six Big Men.”
The Old West

Comics in 1939 were primitive and violent and filled with craziness, but Marvel Comics #1 is almost in a class by itself. The Human Torch and the Sub-Mariner are not heroes per se, they are more like forces of nature unleashed on an unprepared world. The Torch is an innocent, making quick moral decisions that are not always for the best, whereas Namor is a cold blooded killer at was with the white race. Only The Angel is a superhero in any real sense, yet despite his cape and costume, the Angel is a ruthless killer with no superpowers.

The Sub-Mariner story, to my modern eye, says some disturbing things about race. Namor is not so much at war with surface dwellers as he is at war with the White Race. Namor’s mother Fen specifically targets her rage at “white people.” The story ends with a caption explaining “And so Namor dives into the ocean again- On his way to further adventures in his crusade against white men!”

The Angel begins and ends as a mystery. We never learn anything about the Angel’s motivations, not even his name. We never see him when he’s not wearing his costume and fighting crime. The Angel was, once, the fourth most popular Timely character, after the Torch, Sub-Mariner and Captain America.

I’m avoiding comments on the Ka-Zar story because this is an adaptation of a previous story, not an original comic production.