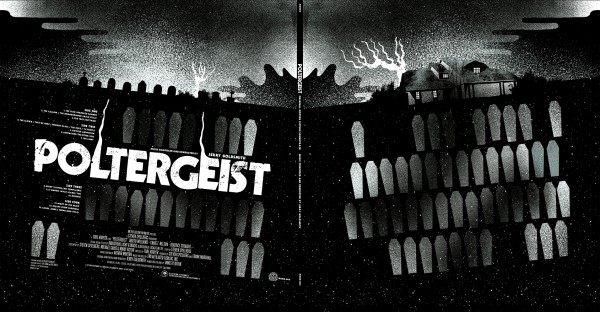 Back when top-loading VCRs were all the rage in my neighborhood, I was gifted with two Betamax tapes that were worth their weight in gold (and gold is a good value system for movies back then since owning one meant paying “Priced for Rental” prices. We’re talking $80-$100 for a flick before it was released to the general public to own, years after it was available for rent) and those two movies were Star Wars and Poltergeist.

And, being the owner of a real life movie (not a blank tape filled with an off-the-tv movie cut up by commercials) meant that everyday after school those wonderful cinematic talking pictures were on constant rotation on the TV until they were seared into my brain like a welt left from a branding iron.


But it was Jerry Goldsmith’s wonderful score to Poltergeist that made the biggest impression on me back when soundtracks really meant something (sorry John Williams, you lose this round), and the haunting Carol Anne’s Theme with it’s children-backed-by-piano was scarier to me than Friday the 13th’s JasonJasonJasonKillKillKill (children singing have always freaked me the fuck out) seriously, sometimes I couldn’t sleep because I thought my closet was going to eat me after listening to that song (which seemed a lot more logical then a mangled-face killer coming after me).

And now, you lucky dog, you too can enjoy long nights of being mentally terrified by the song stylings of a demonic kid choir now that there’s a re-release of that famed soundtrack on vinyl by Mondo, with some insanely spooky-ass sleeve art work done by We Buy Your Kids, all pressed and ready to be yours for only $25.

So put it on in the dark and get ready to enjoy a superb freak out…here’s just a taste: