After my last post about love and Valentine’s Day, I started thinking about weddings and marriage (and if you assume this is because I’m female, know that you are a terrible, terrible person), it’s a subject that has found it’s way into many games.

For instance, Skyrim, in which you can marry various NPCs whether you like women who demand you bring them a wealth of bear pelts or men that follow you around for money and *ahem* companionship you have the option to partake in marital life if you so choose.

Marriage also plays on my mind lately because I am getting married next year. I don’t want a typical wedding because that’s not a reflection of myself or my fiancé. I think this is because we’ve grown up with very different ideologies to our parents and have been exposed to a multitude of games, tv, film and pop culture.

That and we’re no longer governed by tradition or expectation.

Those of us born alongside or during the early years of video games are now at an age where all of a sudden, our friends and peers are getting married, and not just in a video game sense. In the last few years there have been a surge of video game themed weddings, whether it’s a full on theme or just elements such as invites or cake, there is no doubt that gaming is so steeped in our culture, in our lives that it informs a lot of who we are and what we do in life including our big days.

This is the best example of a full-on gaming theme I found in a Google Image search – but does Minecraft have the longevity of other games? Or will this couple regret their decision? Either way, it looks damn cool!

Search for ‘video game weddings’ and you’ll see an array of Nintendo themed proposals, cakes, rings, invites and even costumes and this makes perfect sense due to the nostalgia they bring.

It’s less common to come across weddings based upon contemporary titles, say Assassin’s Creed. This is surprising as whilst at a convention last year there were a hell of a lot of them in the crowds, but then I guess Assassin’s aren’t known for being public, so who knows, maybe there have been thousands of Assassin’s Creed themed weddings? They’re just too damn stealthy.

Some of the best examples of video game wedding items I’ve seen are engraved or personalised wedding rings. Perfect for the couple that want to show their love of games in a more subtle way. To the outsider, the ring looks pretty and the engraved message is seen as a loving in-joke, but to the all knowing gamer, it means much more, giving you instant cool status and a ring which is completely original and the envy of other gamers.

When it comes to your wedding, the cake is definitely not a lie. A wedding without cake may as well be called off. What better way to declare your love of cake and Portal than a Companion Cube? Even more perfect because of what it represents, unconditional, unfaltering love. 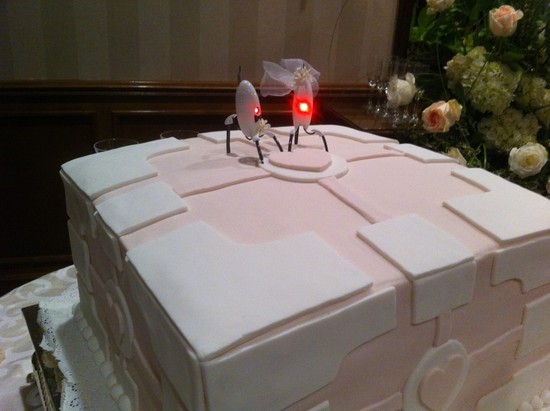 I love the addition of turret cake toppers, which is another way to inject a dose of video game symbolism into your wedding. Customisable characters are rife in video games so it makes sense to customise yourself by incorporating your image into your cake topper.

But all the above is still relatively “safe”, every wedding planner strives to make theirs an original or inventive day but ultimately, weddings are pretty much the same. Married life in video game worlds varies greatly and this should be reflected in real life.

Costumes, cakes and naming tables after game characters are all variations on the same pre-existing traditional plans that all weddings have and that’s just boooring.

We gamers are inventive types, creative souls and having been on the outskirts of what used to be called “normal” – before we all grew up and it inevitably became cool, of course – we are able to think differently. As such we should be aiming our laser sights and plasma grenades higher. It’s not called your Big Day for nothing, so think bigger, damn it!

What about wedding portraits of the couple in video game form (second thoughts, ignore that – that’s my idea!) or arcade cabinets and video game booths – now that would be a wedding I’d be happy to attend!

Rather than dancing how about Nerf gun zombie LARPing? Or side scrolling assault courses? Or to really entertain your guests, Pokémon fighting!

Actually, now I think about it that one is impossible… and kinda cruel.

Now this on the other hand is not cruel, this is amazing:

Weddings are not only meant to be an expression of devotion between two people but also an introduction or re-introduction to who these individuals are and an indication of who they’ll be together.

As geeks and gamers, more and more of these elements will blossom and thrive over the years. I foresee many video game themed weddings, after all, ‘the couple that games together, stays together’ right?

So go forth and be married as gamers should, mix your two favourite games into a theme, play video game music down the aisle or have a band that only plays music from Rockband at your reception. Whatever you do, just make sure it’s what you both want and that it ultimately makes you happy because it’s your day and you can customise it however you like.

There are only a handful of things I wouldn’t advise, namely dressing up as a Big Daddy and a Little Sister, that’s just creepy and inappropriate. 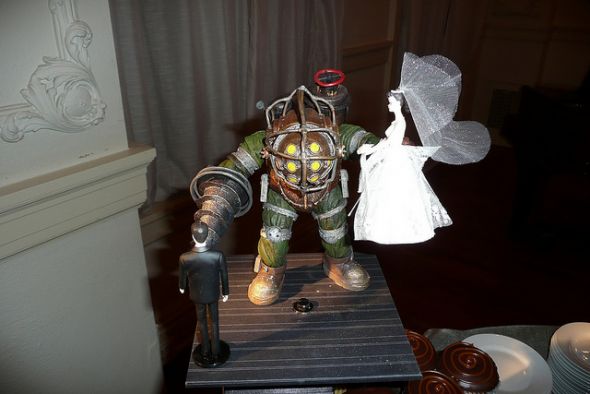