In my last column, I discussed Italy’s sword-and-sandal movies.  These movies yielded to Italian (“Spaghetti”) Westerns by 1965.  But the Westerns yielded to giallo movies (“gialli” in plural) by 1970.  The first gialli actually appeared alongside the first Westerns, around 1964.  But it wasn’t until 1970 that the subgenre really came into its own, and gialli dominated Italian cinema from 1971-1975.

Now, 40 years past their heyday, gialli still hold a broad fascination for fans.  They are sexy, scary, bloody, funny, and twisted.  Below, I’ll describe the subgenre, I’ll note some prominent patterns, and I’ll recommend 10 standouts for your viewing pleasure.

The word “giallo” means “yellow” in Italian, and it referred originally to the yellow covers of the pulp detective novels on which the first giallo films were based.  A typical giallo hero or heroine was a regular person who found him or herself drawn into a crime scheme or murder scheme, as in Hitchcock films like The Lady Vanishes or Strangers on a Train.

Convoluted trick endings would often reveal the murderer to be the most unlikely suspect possible; at times the murderer might be a new character who popped up in the final minutes.

Now, here are 10 prominent giallo patterns.  Enjoy these patterns as you enjoy the movies.

1. STYLIZED MURDERS
Extended stalk-and-chase sequences are common, as victims are terrorized before being brutalized.  Torture scenes are not uncommon: bound victims stabbed multiple times.  Be ready for flashes of gore: brief but intense.  Fear and weirdness are more important than gore in a giallo film, but many giallo directors (Lucio Fulci most famously) later went on to make zombie-gore masterpieces in the late 70s and early 80s.

2. BLACK GLOVES
Giallo killers wear black gloves.  You almost never know the killer’s identity until the giallo reaches its climax, and it’s not just faces hidden by hats or bodies hidden by coats, it’s hands hidden by gloves.  You can’t even tell if a man’s or woman’s hands holds that bloody knife.  Gloves are a sort of prototype for the masks commonly worn by killers in American slasher films.

3. SHOWER AND BATH SCENES
Italian censors tended to balk at overt sex scenes, but they were cool with full nudity if it came associated with bathing.

4. PHOTOGRAPHY
Many giallo heroes and heroines work in photography or have a photographer friend.  Many models are nude, since Italian censors were cool not just with bath nudity but with “art nudes” posing for fashion magazines.

5. VOYEURISM
Many giallo characters are photographed or filmed in secret.  You’ll find many stylized camera shots through open windows, open doors, cracks, keyholes, and all sorts of odd spaces that allow for spying.  Brian De Palma ran with this theme in Dressed to Kill and Body Double, which are basically American gialli.

6. INSANITY
Killers are often revealed to be insane, perhaps with an identity complex.  But giallo heroes and heroines are themselves often insane, at least partially.  We are often unsure if we are watching real events unfold, or merely the delusions or dreams of our paranoid protagonists.  Keeping you guessing is part of the point.

7. EXOTIC LOCALES
Contemporary Italian audiences didn’t always take their own film industry seriously, so filmmakers responded by setting stories elsewhere around the world, usually in other European countries but sometimes in the US.  Due to budget constraints, most gialli featured only a few scenes shot on location; the rest of the scenes would be shot in Italy with actors pretending to be somewhere else.

8. BIZARRE TITLES
Blood and Black Lace probably has the first creative giallo title, but later films – like Your Vice is a Locked Room, and Only I Have the Key really took creative titling to the limit.  For a while, gialli were expected to have animals or insects in their titles, this coming after the success of Bird with the Crystal Plumage.  In many cases, like Four Flies on Grey Velvet, the titles had almost nothing to do with the movies themselves.

9. MOD MUSIC
The great Ennio Morricone scored several gialli, including Black Belly of the Tarantula.  The great Riz Ortolani, who grew to fame for scoring gialli like Perversion Story, later worked with Quentin Tarantino.  Many giallo protagonists, like David Hemmings in Deep Red, are themselves musicians or composers, working for mod or proto-punk bands.

10. GENDER BENDING
Gay and lesbian characters are common.  Killers often disguise themselves as the opposite gender.  Oversized trenchcoats and wide-brimmed hats disguise killer genders altogether.  Some killers have asexual voices, like the New York Ripper killer who quacks like a duck.

Now here, chronologically, are 10 recommendations.  I’ve written more extensively on most of these pictures in my Claws & Saucers guidebook, but I hope you’ll enjoy my brief descriptions below. 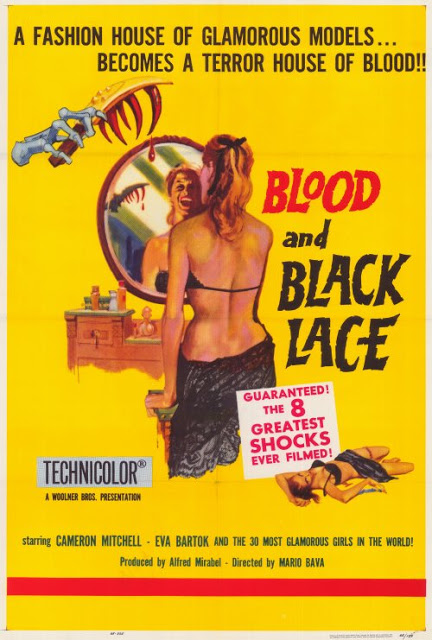 Some critics consider Mario Bava’s previous film, The Girl Who Knew Too Much, to be the first giallo.  But I vote for Bava’s Blood and Black Lace with its disturbing stylized killings and mysterious black-gloved killer.  It’s also the first of many gialli centered around jetsetters in the fashion industry. 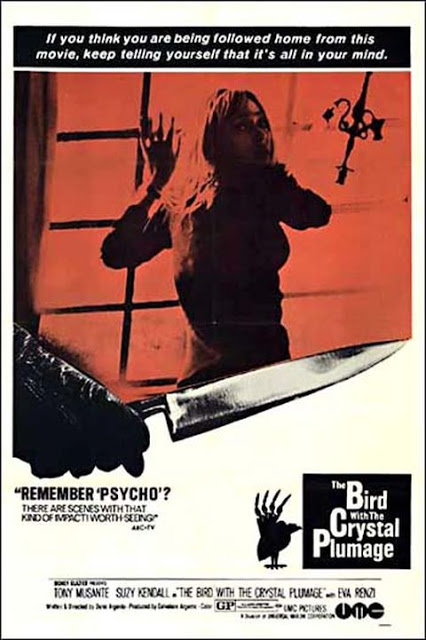 This is the film that crystalized (if you will) the giallo subgenre.  Like Halloween as a slasher film, it wasn’t the first but it became the archetype.  It also put Dario Argento on the map.  It offers both victim’s-eye-view and killer’s-eye-view shots.  Gore is minimal, but harsh sound effects make the murders uncommonly frightening. 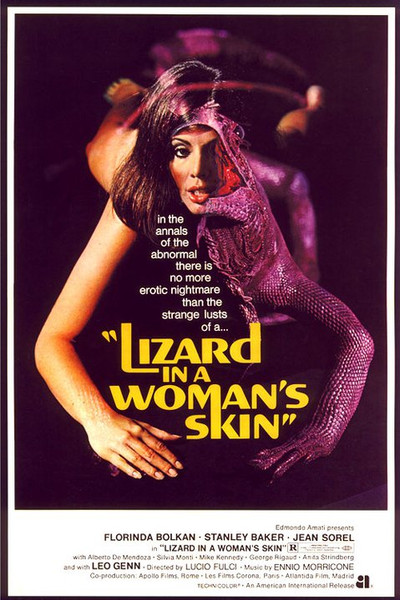 Hippies, drugs, dreams, and near-continuous camera movement make this the most psychedelic of all gialli, not to mention Lucio Fulci’s best.  Ennio Morricone did the eerie jazz score. 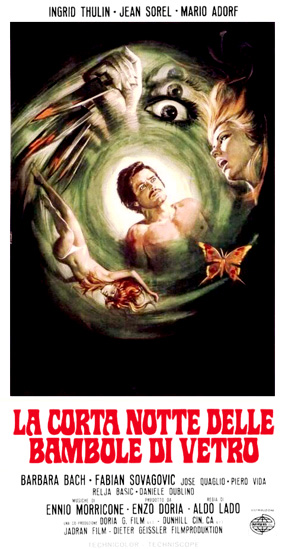 Perhaps the scariest of classic gialli, Short Night has a weird atmosphere that director Aldo Lado intended to be Kafkaesque.  Some moments are borderline supernatural, as we can apparently hear the thoughts of a corpse. 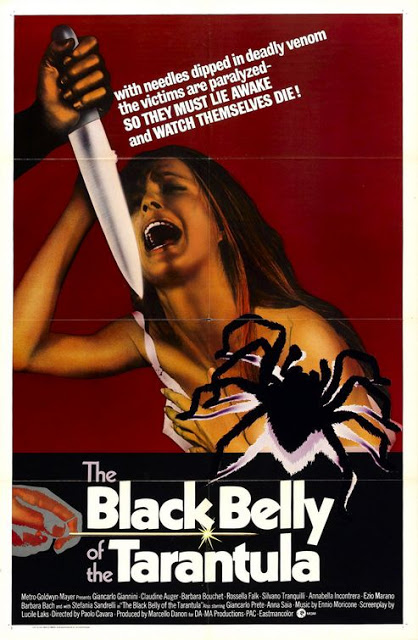 From Paolo Cavara comes one of the most perfectly balanced gialli.  The protagonist is unusually sympathetic; he’s a detective who feels he isn’t tough enough for his job and just wants a simple quiet life.  The methodical killer uses poisoned acupuncture needles (!) to paralyze victims before slicing them to death. 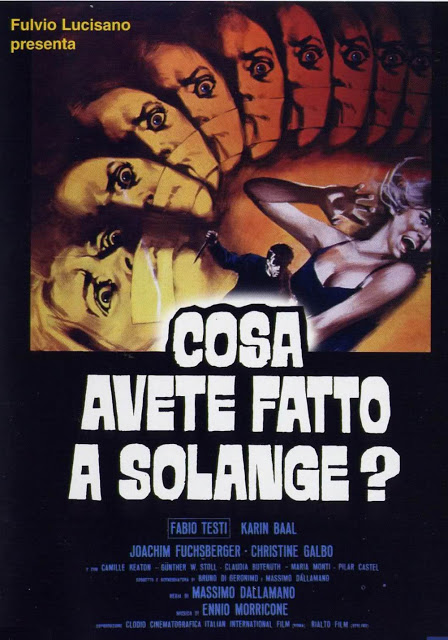 Several gialli have religious (or anti-religious) themes, and this film by Massimo Dallamano is the best and most extreme.  The killer murders schoolgirls in an unusually gruesome way (it’s probably the most gruesome way to kill a woman that you can imagine).  Yet the film is often sensitive, with characters that develop realistically – and these qualities are quite rare in a subgenre where style usually reigns over substance. 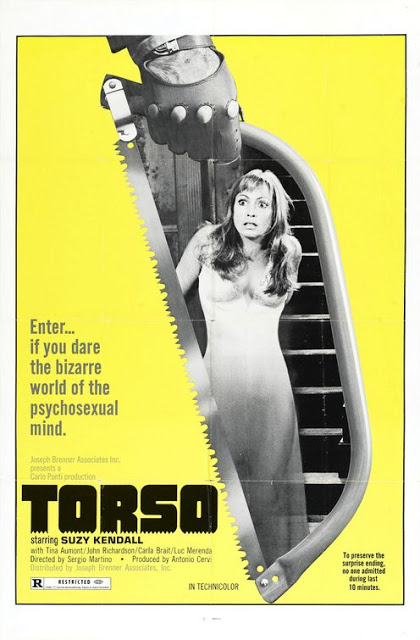 Sergio Martino’s infamous Torso is probably the most extreme of all gialli with gore and nudity.  The Spanish-made Pieces is one of its few rivals in extremism.  Yet even the most repulsed of viewers must admit skill and intelligence behind it all. 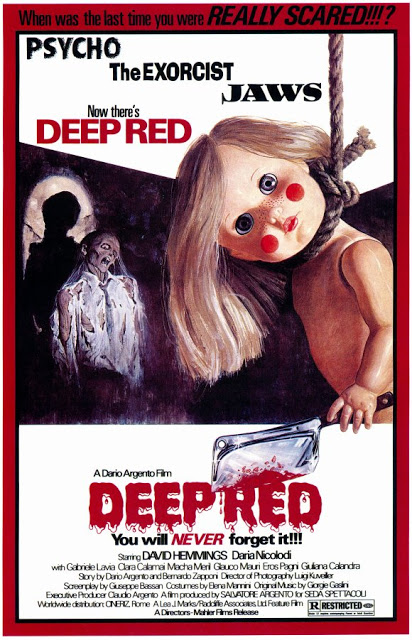 My pick for greatest of all gialli.  Watch how Argento’s trademarks – Art Nouveau interiors, sudden flashes of graphic violence, slow-moving pans over collections of sinister objects, loud art-rock music – blossom together for the first time.  The “Blue Bar” was built to mimic Edward Hopper’s amazing “Nighthawks” painting from 1942.

The golden era of gialli was 1971-1975, but if we push just one year ahead, then Pupi Avati’s Laughing Windows might be the last great giallo of the era.  It’s a quiet but disturbing film that gets weirder as it goes. 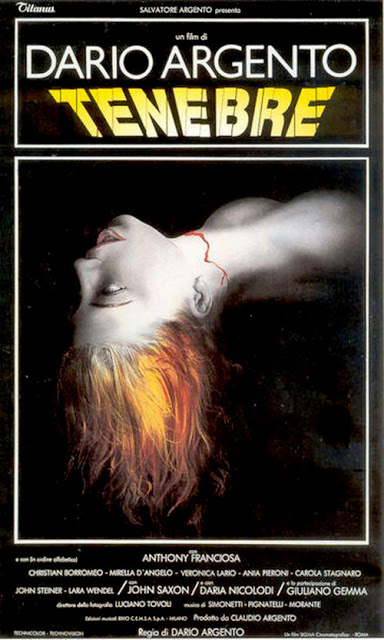 After three excursions into the supernatural, Argento returned to classic giallo style with Tenebre, featuring the highest body count of any Argento film.  Nearly every killing happens in daylight, with white colors prominent in many scenes.  It’s also known as “Unsane.”

If you enjoyed these 10 gialli, Dear Reader, then you will senza dubbio enjoy seeking out many more!