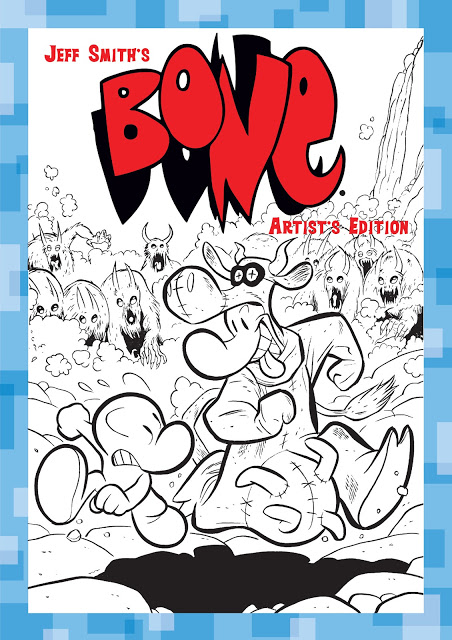 JEFF SMITH’S BONE ARTIST’S EDITION Is Coming!
The Great Cow Race, bigger and better than ever!

IDW Publishing and Cartoon Books are pleased to announce Jeff Smith’s Bone Artist’s Edition, to be released this fall and featuring one of Smith’s most beloved stories: The Great Cow Race! Featuring Fone, Smiley and Phoney bone, Gran’ma Ben, the radiant Thorn, and, of course, those stupid, stupid Rat Creatures!

“The Artists Editions are one of the coolest things to happen to comics in a long time,” said Bone’s creator, Jeff Smith, “I can’t wait to be a part of it! Does this mean I get a comp copy of the Wally Wood book?”

Jeff Smith and Vijaya Iyer launched Cartoon Books in 1991 with the release of the first issue of Bone. A certified smash-hit, Bone remains an evergreen standard for Cartoon Books, continuing to sell to children of all ages. Jeff Smith and Bone have won 10 Eisner Awards (while being nominated for another 11) and 11 Harvey Awards.

What is an Artist’s Edition? Artist’s Editions are printed the same size as the original art. While appearing to be in black & white, each page has been scanned in COLOR to mimic as closely as possible the experience of viewing the actual original art—for example, you are able to clearly see paste-overs, blue pencils in the art, editorial notes, art corrections. Each page is printed the same size as drawn, and the paper selected is as close as possible to the original art board.

About IDW
IDW is an award-winning publisher of comic books, graphic novels and trade paperbacks, based in San Diego, California. Renowned for its diverse catalog of licensed and independent titles, IDW publishes some of the most successful and popular titles in the industry, including: Hasbro’s The TRANSFORMERS and G.I. JOE, Paramount’s Star Trek; HBO’s True Blood; the BBC’s DOCTOR WHO; Toho’s Godzilla; and comics and trade collections based on novels by worldwide bestselling author, James Patterson. IDW is also home to the Library of American Comics imprint, which publishes classic comic reprints; Yoe! Books, a partnership with Yoe! Studio.

IDW’s critically- and fan-acclaimed series are continually moving into new mediums. Currently, Warner Brothers and Barry Sonnenfeld are attached to adapt LORE into a feature film starring Dwayne “The Rock” Johnson and Jerry Bruckheimer Films and Disney are creating a feature film based on World War Robot, with Michael Bay‘s Platinum Dunes and Sony bringing Zombies vs. Robots to film.