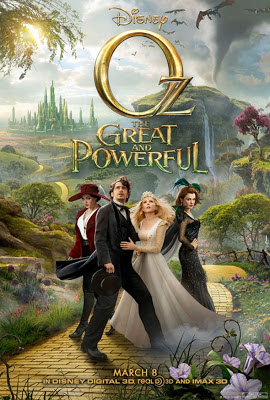 Oz the Great and Powerful

Produced by Joe Roth
Screenplay by David Lindsay-Abaire, Mitchell Kapner Based on The Oz series by L. Frank Baum
Directed by Sam Raimi

Oz the Great and Powerful is the story of how conning circus magician, Oscar Diggs becomes the all-powerful Wizard of Oz.

He is desperately searching for fame and glory when he falls up and away from Kansas into the magical Land of Oz.

Oscar/Oz thinks he has fallen into instant royalty until he realizes his trek involves far more than swooning every woman, or witch, he meets.

I found Oz humorous, but outside the laughs it lacks in story depth and the mood is inconsistent. The juxtaposition of walking along and being quirky, to seeing an entire dead and ruined town, followed by skipping and jokes a moment later, is disconcerting. When it takes a dip into serious-mode it’s a little too dark for a children’s film.

It gives the impression that Oz isn’t comfortable with itself. The draw is the witty banter amongst the cast, not the plot mission.

James Franco is comical as the con-man/magician, Oscar Diggs, nicknamed Oz. He is lovable, sketchy, and hilariously male which serves as very entertaining for adult members of the audience. That being said, he feels a bit too libido driven for a children’s film. And while the huge teeth-bearing grins and eyebrow lifts generate lots of laughter, they are too heavily relied upon for the comedy.

Oz shares the yellow brick road with a team of misfits. Zach Braff as Finley, Oz’s flying monkey assistant, is sweet and adorable. The same can be said for Joey King as the China Girl. The lines from each were predictable but nevertheless funny and light. If there was any chance that I’d care about the fate of the Land of Oz, it was generated by these characters. They complement one another satisfactorily, but Oz is for the most part entitled and rude to his companions. It was just James Franco being snarky and sarcastic. I couldn’t believe they would ever really feel drawn to unite with the likes of him.

The mission of Oz, Finley, and China Girl are to defeat the Wicked Witch, but which witch is the true wicked one? Theodora, Evanora, or Glinda?

Theodora played by Mila Kunis was rigid and wide-eyed. There is an attempt to bring out some depth when her older sister mentions a temper history, which is only exemplified once she realizes Oz has duped her. Her tears and temper tantrums are irrational and off-putting. It took her out of the role because there was zero substance. In the emotional moments I just saw Kunis spouting out lines over-dramatically.

Reminded me of That 70’s Show and Family Guy – just an annoying girl yelling.

Rachel Weisz plays the beautifully exquisite and conniving older sister, Evanora. She promotes hissy fits in her younger sister but really there’s no history or reason for Evanora’s wickedness. Perhaps it’s because she’s the oldest and has a British accent…

Contrasting the two dark haired evils, is the blonde, doe-eyed Glinda played by Michelle Williams. I couldn’t stop picturing her as Marilyn Monroe: soft voice, feathery air of sensuality, angelic smile. She wears white and she is good. Accept it. Her back and forth with Oz is funny but it feels very staged.

The dialogue is equipped with laughter pauses. It was odd. I felt like I was watching a stage production where the actors knew the audience would laugh at certain moments and would keep winking at us. Too aware it was all a big show for my taste. Fourth wall breakage has its place but not in Oz.

As for the munchkins and other magical creatures of Oz, they are supposed to promote ooo’s and aaah’s but I couldn’t tell you much about any of them, as they were largely unimpressive and forgettable.

While the 3D is supposed to add an element of depth and “wow”, it’s distracting. The landscape was cheesy and comprised of not so great CGI. The special effects made it feel cartoon-y and goofy but not in a clever way. Best response to this addition to the film came after a close-up shot of a computer generated scary monster—a little boy shouted from the audience, “Oh my goodness! That’s so scary it almost made me throw up!” The largely adult crowd laughed with him and then continued our rather anticlimactic journey through Oz.

Oz is romantic, fun, and lovable as a children’s movie but as an adult viewer my overall impression was that it was sleazy and fell flat. The score composed by Danny Elfman immediately put my mind in Tim Burton mode and it was hard not compare Oz to Alice in Wonderland, a story similar in the sense that a human being “awakens” in a fantastical world with a destiny to lead a war and save a kingdom. Alice at least disbelieved at first. Her self-doubt and anxiety were overcome with challenges of strength, self-confidence and courage. Oz fell into Oz and was rather blasé about the whole thing.

Oh yeah sure, water fairies, witches, flying baboons, not even a gasp at the magical. I understand that he is a magician but come on, the real magic of Oz is supposed to be splendid. He just went about business as usual and picked up where he left off in Kansas, on the prowl for money and a woman to woo.

Bring the children you’ll laugh a bunch, but Oz the Great and Powerful isn’t too spectacular.

In this article:Movie Review, Movies/DVD, Wizard of Oz, Written by Caitlyn Thompson