The KGB has another internal disaster and it’s up to our friendly neighborhood spies to clean it up again. The KGB has hired an assassin (Chris Sullivan) from East Germany to “take out” the 14 American scientists who are part of the nuclear ballistic program, however in mid-mission, changed their minds but can’t get a hold of the assassin to stop him.

Phillip (Matthew Rhys) and Elizabeth (Keri Russell) are tasked with the awesomely craptastic job of finding an assassin they have no information on – no name, identification, or location and convince him to stop his mission by any means necessary.

To get the ball rolling, Phillip and Elizabeth blow up the car of a scientist on the list, this to spur the American government into providing all the scientists with some protection, while they began their search for the assassin. 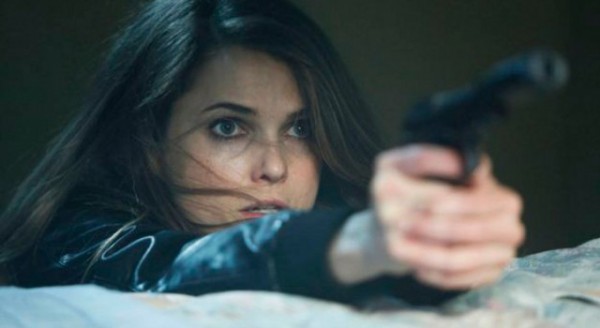 Claudia (Margo Martindale) provides Elizabeth with the contact information of an explosives dealer that the assassin may use and the two spies get a picture of the man they’re looking for.  Awesome, now they have a face, a disguised one, but something is better than nothing.

Next, Phillip dons his “Clark” persona and goes to visit Martha (Alison Wright).  Clark bemoans his fate at work, stating that he needs some big case to crack so he can solidify his presence in the office. In an attempt to do right by her new man, Martha obtains a list of all non-immigrant visas that were given out in the last year.  Phillip is able to match one of the individuals to the picture of the disguised assassin from the explosives dealer. 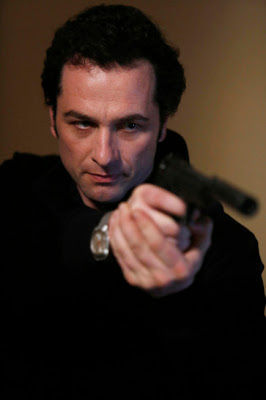 Now the Jennings’ have a real face and better yet, a location.  The two agents pay the assassin a visit in his hotel room, telling him to stand down. But of course, he doesn’t and after a tense standoff, an exchange of bullets, the assassin from East Germany is plastered all over his hotel bathroom by his own explosive device. Blech!

Another mission completed successfully for the Jennings.

Actually, slow down, not so successfully.

The assassin had managed to rig the walkie-talkie of one of the FBI agents guarding a scientist at a safe location.  Even though he was already dead, the bomb was successful and he managed to take out the scientist as well as three FBI agents.  KGB Central wanted an explanation of the Jennings’ failure.

Things started out great from Elizabeth and Phillip this episode – they were happy, they were flirty and they were one big happy family until Claudia told Elizabeth about the time Phillip spent Irina (Marina Squerciati) while he was in New York.

Elizabeth was visibly devastated as she walked away from Claudia, and for the remainder of the episode, retreats into the cold distant shell that we’re all fast becoming familiar with.  Elizabeth decides that they – Phillip and her, can no longer indulge their personal feelings for each other.  Phillip finally frustrated and at his wit’s end, tells Elizabeth if she no longer wants to be married to him the KGB would not even care.  This places the ball back squarely in Elizabeth’s court because we all know she loves Phillip, but what is she going to do about it.

Phillip might think that his relationship with Elizabeth is his biggest worry, but little does he know what drama is coming his way.  Martha (Alison Wright) just loves the little life that she’s building with Phillip’s Clark persona.  Music, candlelight dinners and finally some action in the bedroom is just the right combination to make this FBI secretary light up and she’s driving Agent Amador (Maximilano Hernandez) crazy with all her new sassiness.  Amador, already frustrated that the US won’t just declare war on the Soviets, is infuriated at Martha’s rejection of him again. Plus I think his “spidey” senses were tingling because he unbeknownst to him caught Martha returning confidential files back to their secure location, after she had made copies to help her man Clark out at work.  In next week’s episode we see Amador questioning Clark. This is going to end badly for someone soon.

On a surprisingly human note this week, Agent Gaad (Richard Thomas) gives Beeman (Noah Emmerich) keys to a safe house where he and Nina (Annet Mahendru) can meet. 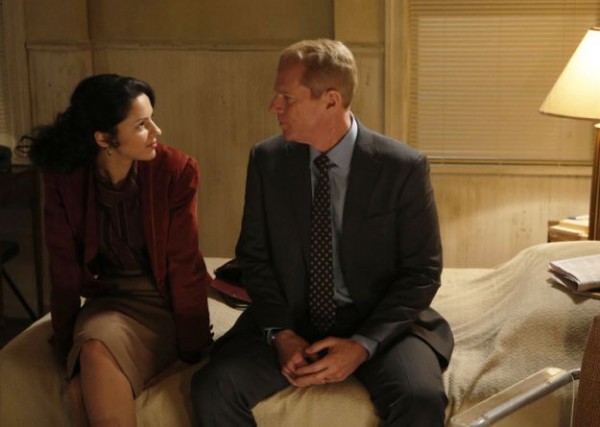 Of course the location quickly turns into a secret love nest for the two lovesick puppies, however things also appear to be looking up for Nina at the consulate as well. After a harrowing interview with Arkady (Lev Dorn), the new head-honcho, Nina received a promotion – she will be working directly with him.  I don’t envy this woman her life, seriously every waking moment wondering if this is the last one you have as a free physically intact person, not knowing when or if ever to lay your guard down. Nina finally lets on as to what she gets from Beeman – a chance to be honest and unguarded.  Beeman on the other is still tormented by his infidelity, guilt and ambition, so forces he really can’t control, not unless he chooses to compromise something, are buffeting him about.  What to give up on, though is the question for him.

So next week there’s an Amador-Clark showdown and lots of goings on with the FBI.  Things definitely look dire for our dynamic duo, but I think I’ve said that before, so kudos to Weisman and co. for keeping us all on our toes. Another week to wait to see what happens…