The Ponds are gone and the good Doctor (Matt Smith) is now left pondering his mysterious new companion-to-be, the bright eyed Clara Oswald (Jenna-Louise Coleman.)  To reflect on this enigmatic woman he’s already crossed paths with in various places in space and time, he holes up in an abbey in Cumbria, year 1207.

His fellow monks inform him that the “bells of saint john are ringing,” which turns out to be the phone nestled in the door of The Doctor’s police call box/ TARDIS.

It’s Clara on the line and fate (probably with the help of an as yet unseen hand) has brought the two together after her call for internet troubleshooting has taken an extradimensional twist and reached the Doctor. He immediately transports to the London home where she works as a nanny, but his face draws a blank with her. 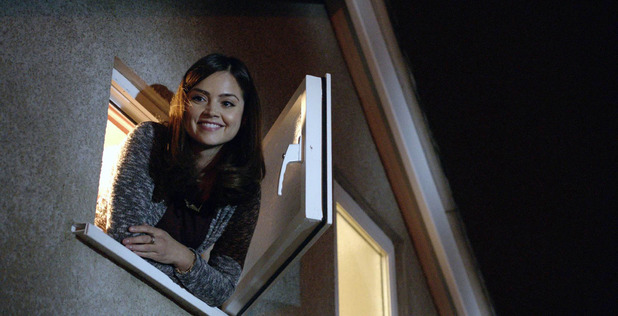 “Doctor…who?” She asks, squinting her eyebrows at him.

“Who? Just the Doctor. Actually, sorry, could you just ask me that again?”

“Doctor who?” She repeats. The Doctor digs the sound of it.

As it turns out, Clara does have some major internet problems, most notably a team of headhunters who are using wi-fi to extract people’s souls for a human hungry client (the Great Intelligence, the villain from this season’s Christmas special.) The Doctor saves Clara from being downloaded by a robot servant, a “spoonhead”, but the human hackers aren’t very keen on giving her up. They close in on her location and the TARDIS makes a quick scene change to save a wi-fi controlled airplane from crashing. Clara keeps a cup of tea undisturbed through the whole scene.

The Doctor and Clara decide to take a break from the dramatics and zip around London on a motorcycle (an anti-gravity one, it turns out) the Doctor had stashed somewhere in the TARDIS and go get breakfast. 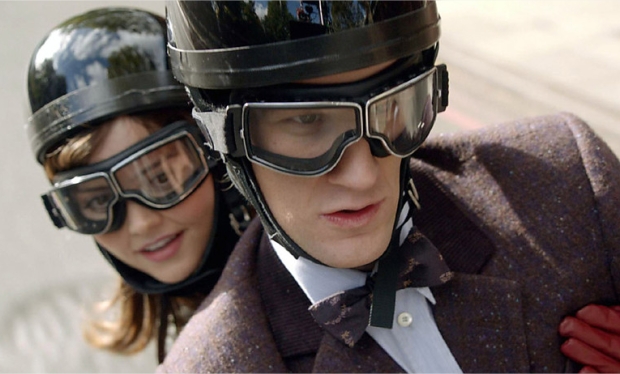 While examining the breakfast pastries, the Doctor is confronted by the head of of the soul hackers, Miss Kizlet, who offers him sinister warnings about interfering with their business.

Meanwhile, a spoonhead avatar disguised as the Doctor downloads Clara to a bank of captured souls.
Naturally, the Doctor saves the day. After riding his anti-grav bike up a building the hackers are stationed in (named The Shard) and crashing through the window, he confronts Miss Kizlet. In typical Doctor trickery, he has outwitted her and reveals that the Doctor in front of her is the spoonhead proxy of himself. He has now manipulated it against them, as he remains seated safely at the cafe. The robot proxy downloads Miss Kizlet’s soul into their own databank. 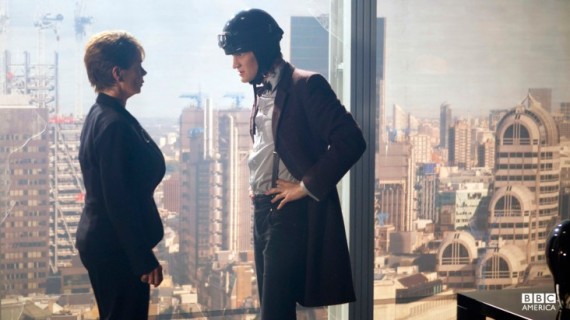 The trapped souls form a data cloud and therefore all or none must be downloaded. Kizlet’s employees release the souls and Clara comes back around. Kizlet realizes they’re all screwed and hits a “restore factory settings” button, causing the entire staff to writhe in pain and lose memory of being brainwashed into the company as the soldiers of UNIT storm the building.

Overall, not the most compelling or action packed storyline, but there were a couple of great scenes that featured witty chemistry between the Doctor and his new companion. The London scenery, most notably in the motorcycle scene, always looks as good as a bow tie on the Doctor. 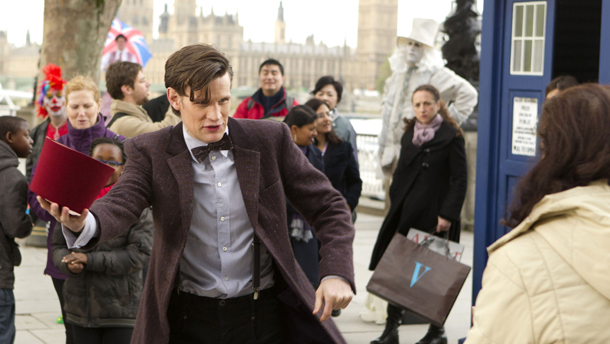 The episode ends with the Doctor summing up what will likely be the theme for the rest of the season:

“Right then, Clara Oswald, time to find out who you are.”